For a week in March, eleven students with varied backgrounds explored the city of Oaxaca and the nearby Sierra Juarez mountains under the guidance of Plant Biology Assistant Professor Michael Sundue. 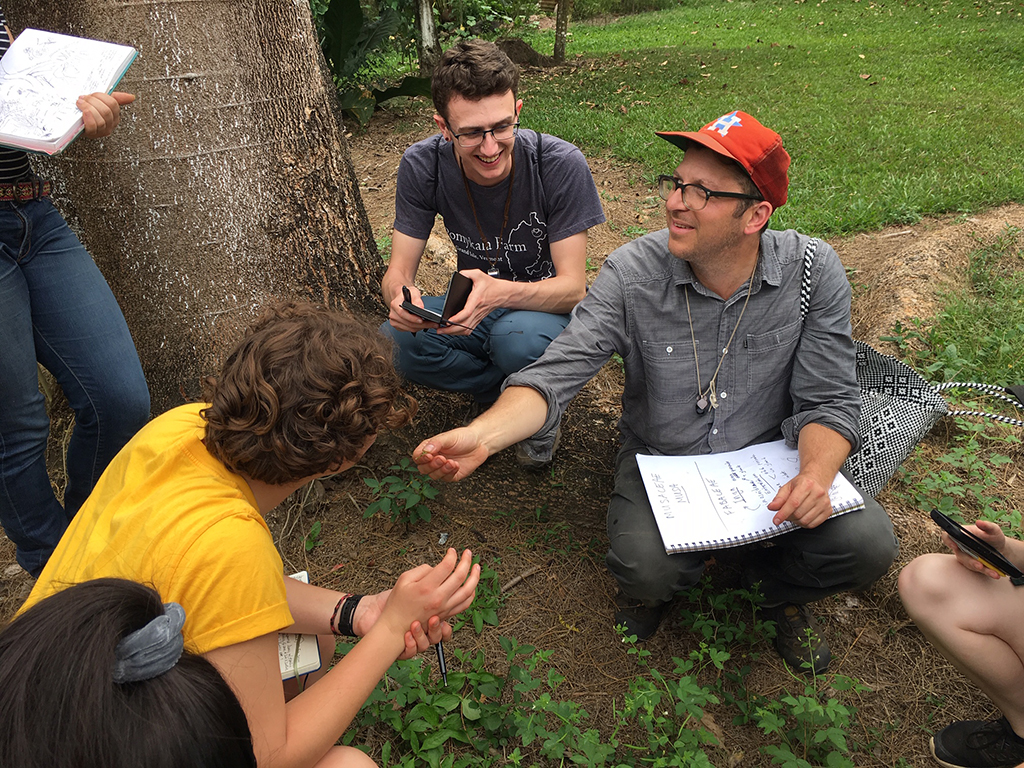 We navigated food markets and rain forests, watched a night-blooming Psuedobombax tree burst into splendor, cooked with Zapotec women, and serendipitously stumbled upon a tiny backyard cacao and chocolate operation. Michael taught us to crush and smell leaves to help identify them, to praise delicious food with the word riquisimo, and to keep our minds open and our hand lenses ready. We learned about more than plants. “If you say ‘always,’ you’re always wrong,” Michael cautioned—a good maxim for botany, and for life.

The Birthplace of Corn 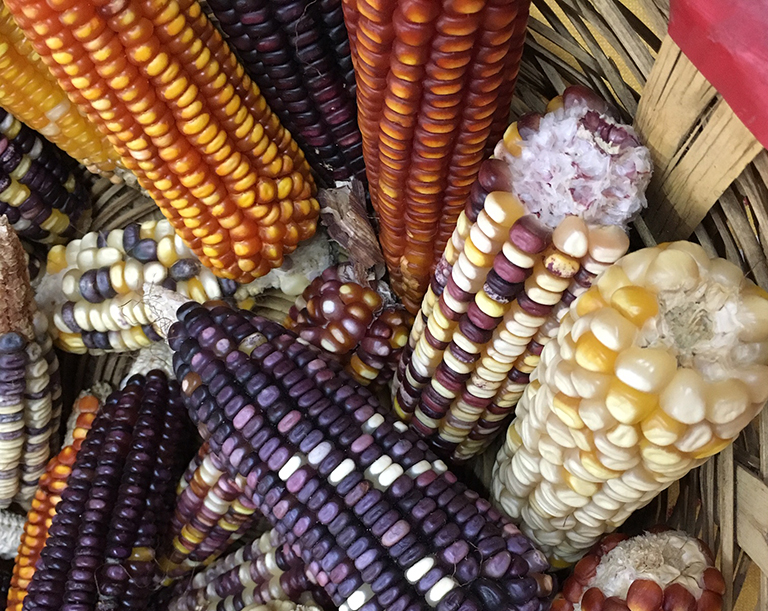 The smell of elote beckons from street corners and plazas, where vendors grill the long spears of corn to a charred bronze and then smother on mayo and fresh queso cheese. Vibrant dried cobs star in centerpieces, bejeweled with kernels of vermillion, indigo, auburn, gold. Even the husks are used to envelop tamales and to adorn church doors, curled into pale golden flowers.

The sights, smells, and tastes of corn fill my memories of Oaxaca, Mexico: the birthplace of maíz and home to 35 different land races of corn. After being nixtamalized with lime to release its nutrients, corn is transformed into its magical powdered flour form: masa harina. Masa harina thickens vegetable soups, morning mugs of hot atole, and tejate, a chilled beverage whipped to foamy, sweet bliss. Corn in all its glorious forms and flavors is braided into the history of Oaxaca and alive in the rhythms of everyday life.

Arguably most important, corn makes the masa dough that is the main ingredient of tortillas. Oaxaca is south of the Great Tortilla Divide so every tortilla we encountered was maíz — no flour tortillas in these parts. “Tortillas, tortillas they are a whole other universe,” noted our guide, Goyo. No meal was complete without a steaming stack of them tucked under a clean dish towel. No matter the main dish, they were soft, warm spoons for gracefully and deliciously dipping, carrying, and wrapping.

Just a few of the specific dishes in which tortillas play a starring role are memelas, tlayudas, and tostadas. A beautiful breakfast of memelas con flor de calabazas displays bright orange squash blossoms arranged on small crispy tortillas spread with a layer of velvety beans and herbs. Tlayudas are like their larger, personal-pizza sized cousins topped with meat, vegetables or cheese and eaten open-faced or folded over.

I will always remember tostadas made by a woman named Jarit, who served them piled high with avocado, beans, salsa and the Oaxacan string cheese called quesillo. She had set up a humble restaurant in her garage where we ate in plastic chairs amidst colorful postcards and a bike strung with fairy lights. She welcomed us warmly and seemed delighted with our appreciation of her food. Tortillas to me will always taste of commensality and conversation.

-Isabella Alessandrini is a junior studying Dietetics and Food Systems. She has lived in California and New York, but calls Vermont home.

Under the Radar: The Mysterious but Invaluable world of Insect-Plant Interactions 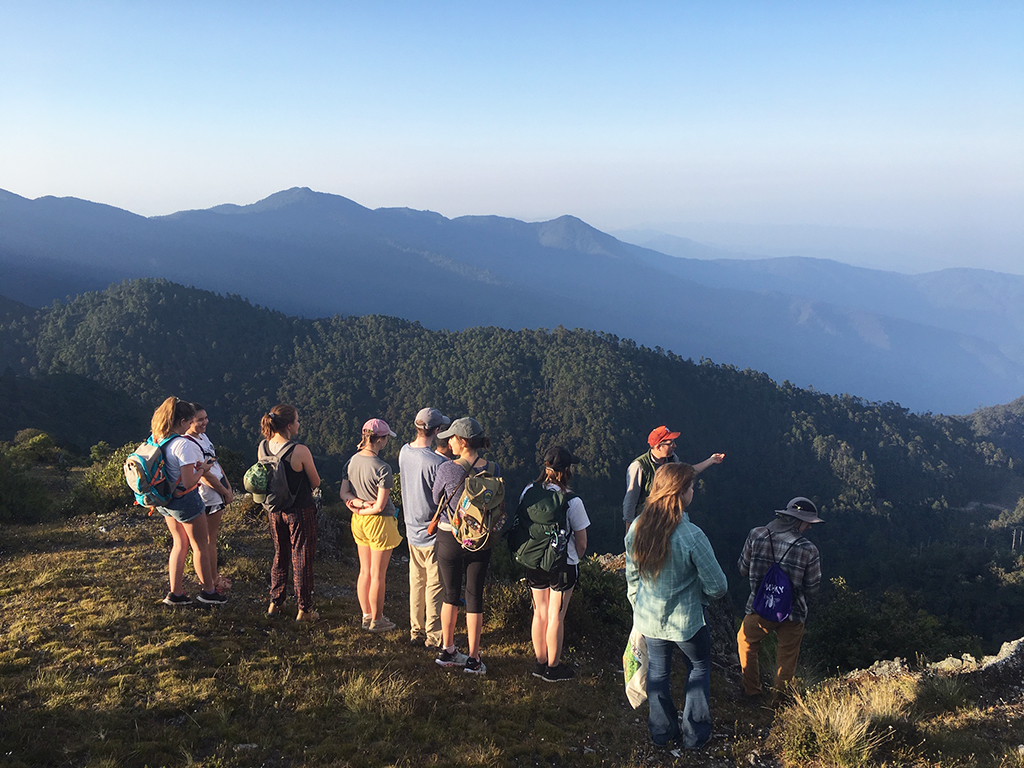 Professor Michael Sundue with students in the Sierra Juarez mountains.

Both the scarlet yarn woven into intricate rugs by Zapotec Women in the Vida Nueva Women’s Weaving Cooperative we visited, and many red velvet cakes have one thing in common: bugs. More specifically, pigment extracted from the cochineal, a small insect that feeds on prickly pear cacti. During a tour of the Ethnobotanical Garden of Oaxaca, we saw these cochineals, fuzzy and white from the wax they secrete, latched on to cactus pads. When you crush cochineals, the bright carminic acid which they produce as a defense mechanism bleeds bright into their white coats. Ironically, the very adaptation that cochineals acquired to protect themselves from predation has made them a precious resource to humans.

The botanical garden was also home to an abundance of old, arching trees dripping with figs. Upon opening one of the figs, we found it crawling with fig wasps. This wasn’t an infestation, but rather an intricate pollination process. Figs are a collection of flowers enclosed in a stem, which, when fertilized, turn into a collection of fruits, or an infructescence. Pregnant fig wasps enter the figs, pollinating the flowers while laying their eggs inside of the fig. These species have a mutualistic relationship: the wasps offer pollination and the figs offer a home and food source for the hatching wasps.

Trading the tamer botanical garden for the Sierra Juarez mountains, we hiked to a cow pasture where we botanized an innocent-looking shrub, Gaultheria. Not to be fooled by its virtuous appearance, we learned that some species of this genus contains grayanotoxins which, in high enough doses, are intoxicating, hallucinogenic, and sometimes deadly. Honey made from these flowers is known as mad honey for this reason.

So, next time you enjoy a slice of cake, eat a fig newton, or dabble in hallucinogenic honey, think of the insects that have made the existence of these products possible. Take a moment to stop and smell the flowers. Just make sure you aren’t sniffing a toxic Gaultheria. 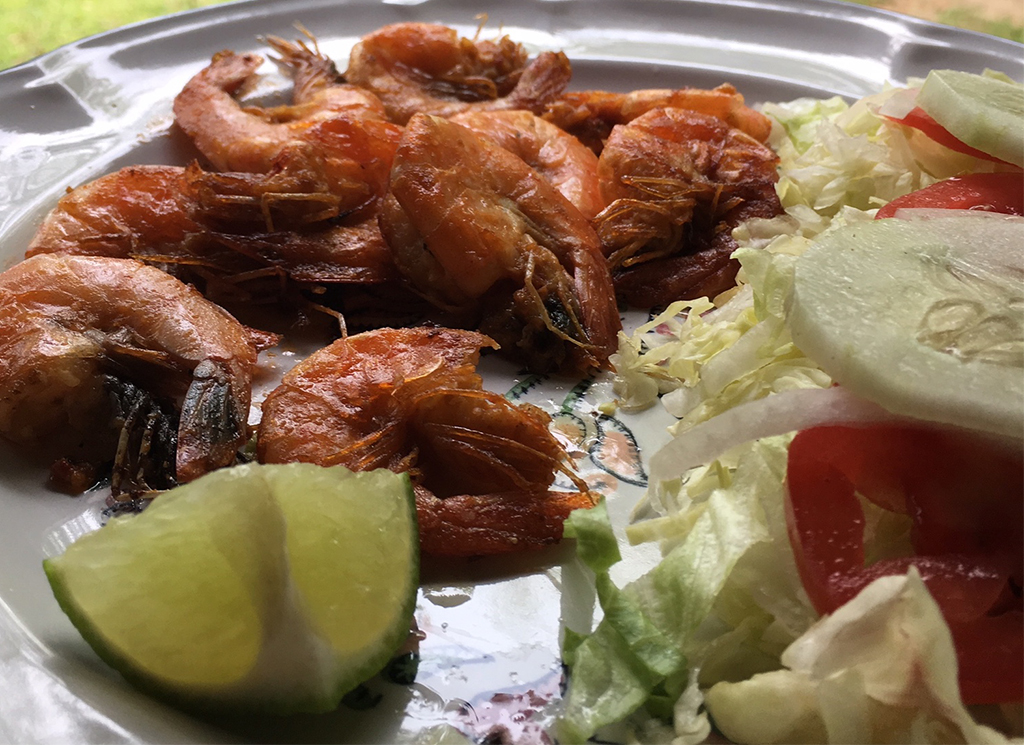 Camarones on the plate, originally from the river in the background in Yetla.

The river in Yetla runs over rocks behind the palm leaf hut creating a steady soundscape that welcomes all to relax. That river is home to small ecosystems containing long-legged birds, plants, and the water animal that became my favorite dish from all of my Oaxacan adventures: camarones. The fresh, juicy shrimp were boldly seasoned with chilies and salt. My past experiences with shrimp had not prepared me for my dive into this savory dish. With bodies soft enough to crunch right into and pull the meat from spice-soaked shells, my hands and cheeks were stained. It was by far the messiest and most satisfying dish I’ve had the pleasure of having.

Nestled between homes and rivers in valleys and on hillsides are small cultivated plots called milpas, which many families rely on for food and, at times, income. Each rich field is unique and important to the family and community. The uniqueness of place made for the uniqueness of the food, translated to the dinner tables, like the shrimp from the river in Yetla.

The use of the land and water varies and contributes to each community. Down beneath the canopy in La Esperanza, a small town in the cloud forests of the Sierra Juarez, Eugenio makes aguardiente and rum in the clearing through the sugar cane stalks and banana leaf walls. He prepares this drink in the heat with his dog by his side and his friends all around for the celebration that’s happening next week. Nearby, in her front yard, Rosa grows cacao so she and her daughter can make and sell traditional chocolate.

The flavors come from the earth beneath their feet and that does not go without appreciation. This relationship with their land and their community has deep roots that reach down into the soil and grow far above their heads, just as it has been for generations.

-Lexi Colantuno is a sophomore from Devon, Pennsylvania, studying agriculture and horticulture with a minor in soil science.