Since the late 1990s, undocumented Mexican and Central American farm workers on Vermont’s dairy farms have been instrumental in helping bring milk, cheese, yogurt and other food products to market. 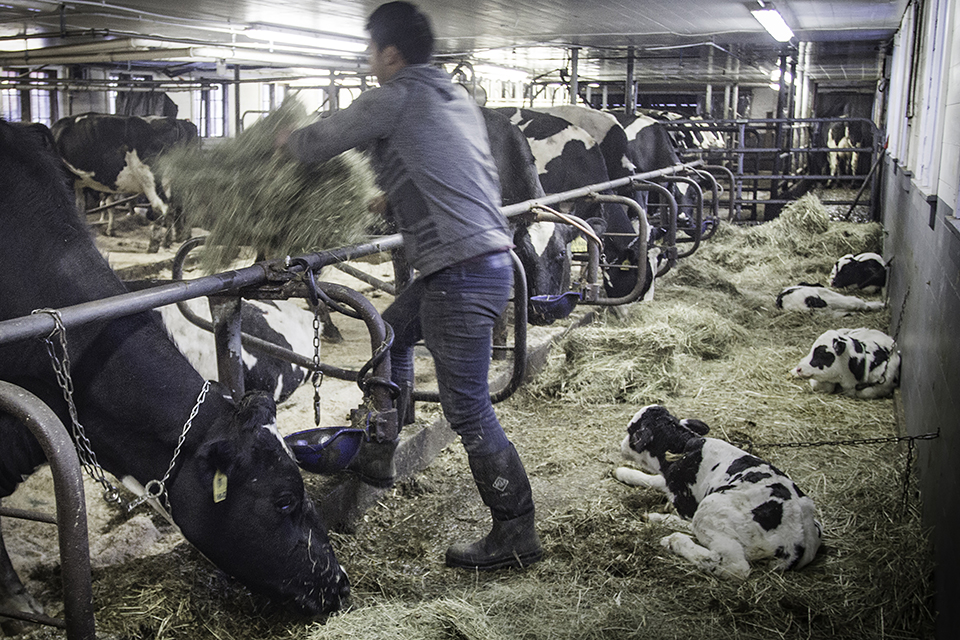 While the laborers play a vital role in feeding others, many face significant barriers in accessing food themselves, says a new book.

According to Life on the Other Border, Farmworkers and Food Justice in Vermont (University of California Press, April 2019), by Teresa M. Mares, an anthropology professor at the University of Vermont, 18 percent of Vermont’s undocumented migrant farm workers are food insecure, defined as lacking reliable access to a sufficient quantity of affordable, nutritious food, compared to between 13 and 14 percent for Vermonters as a whole.

The book is the first to measure food insecurity in this population.

While that number is troubling, it’s likely much too low, given the unique circumstances of Vermont’s migrant farm workers, Mares says.

The standard method for determining food insecurity, which Mares used to arrive at the 18 percent figure, administering a USDA survey to 100 migrant farm workers in the state, is income based. While Vermont’s migrant laborers often do face economic difficulties, the bigger challenge that most experience is accessing places to purchase food.

“Because of the large presence of Border Patrol agents, especially in Franklin County, migrants are often afraid to leave the farm to go to the supermarket,” Mares said.

Based on in-depth interviews she conducted with 30 migrant farm workers and 10 service providers, Mares says it’s likely that 50 percent or more of farmworker homes experience challenges accessing food, particularly at grocery stores and other food outlets.

“One of the interviews that really sticks with me was shared by a farmworker woman from Chiapas, Mexico,” Mares said. “She said the problem isn’t that we don’t have money, it’s that we can’t leave. She was referring to leaving the farm.”

“Food insecurity is about getting enough food and the right kind of food, but it’s also about the emotional and mental health impacts of being isolated and constantly under stress and anxiety – being worried about food. That is a further troubling aspect of the migrant farm worker experience in Vermont.”

Mares’ research was completed in the fall of 2016, but after Donald Trump was elected President in November, she decided to conduct more interviews to see what impact the election might have had.

“The public acceptability of anti-immigrant sentiment really changed – the openness about expressing hatred toward immigrants,” she said. “That led to increased fear, increased anxiety and growing uncertainty about their own families and livelihoods among migrant farm workers.”

A migrant worker from Middlebury whom she interviewed after the election, for instance, told Mares she began “facing questions about where she was from and whether she had ‘papers’ from people who proudly shared they had voted for Trump,” Mares said. “She had never before experienced that level of hatred from her own community.”

While the book paints an unsettling picture of migrant farm workers in Vermont, it also applauds the progress that has been made in recent years by labor organizing groups like Migrant Justice.

“Despite all these problems and the vulnerability migrant farmworkers are experiencing, it’s been a really important time for farmworker organizing,” she said.

Migrant Justice’s Milk with Dignity campaign, for instance, not only institutes a code of conduct that guarantees workers are treated humanely and have fair housing, it also addresses economic justice in the supply chain by asking companies like Ben and Jerry’s to pay a premium to the farms where they source their milk.

“An important element is that they are seeking structural changes, whether it’s in policy or corporate purchasing,” Mares said. “Migrant farm workers face structural challenges that call for structural solutions.”

While the book focuses on Vermont, its insights and conclusions are applicable to wide swath of the country’s northern border.

“You see the same experiences Vermont is having in many other states,” Mares said. “Wisconsin, New York State and Washington State have similar issues. Wherever you have large dairy operations, you have undocumented labor. If the farms are near the Canadian border, they’re experiencing many of the problems Vermont is seeing, including – and especially – around the issue of food insecurity.”