Tyler Doggett Explores the Ethics of Food Production and Consumption

Associate Professor Tyler Doggett began teaching the Ethics of Eating at UVM in 2009. Since then, he has written and edited multiple articles and books about the rights and wrongs of the food industry—from labor to consumption to the mixed messages our culture sends about eating. 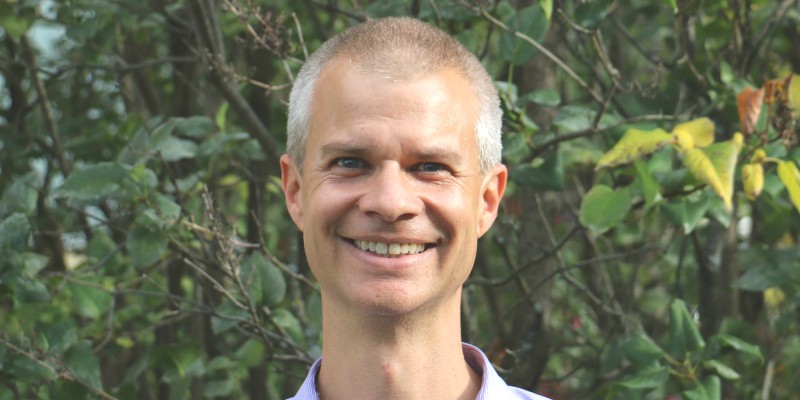 The latest is The Oxford Handbook of Food Ethics (Oxford University Press, February 2018), which he co-edited with colleagues Anne Barnhill, a research scholar at the Berman Institute of Bioethics at Johns Hopkins University, and fellow UVM philosophy professor Mark Budolfson.

We talked to Tyler about the complexities of consumption ethics and the many ways we are benefiting from wrongdoing.

How and when did you first become interested in food ethics?

I read some articles about food in college in the late 90s and became interested in animal ethics then. I read Michael Pollan’s The Omnivore’s Dilemma maybe 10 years later and realized there were more issues in food ethics—issues having nothing to do with animals and a lot to do with large-scale plant farming. Plus, when my wife and I moved to Burlington in 2005, I came across City Market, a grocery store that actually publishes pamphlets making ethical arguments about food. City Market used to have a raccoon icon by the local food they sold. The raccoon was pumped and I remember thinking, “What is that raccoon so excited about? What’s so great about local food?” City Market had a pamphlet about this, and that was a gateway into more academic literature on the topic.

You co-edited a textbook, Food, Ethics, and Society—the first of its kind—in 2016, and recently co-edited the new Oxford Handbook. How are the two books different?

The textbook is used in my food ethics class, and Anne Barnhill, Mark Budolfson, and I developed it as a teaching tool. It’s aimed at students and people who know nothing about philosophy. The new handbook, by contrast, is an introduction to food ethics that is pitched at philosophers.

What are some food ethics issues that you would like to come to the forefront over the next 5-10 years?

I think it would be great to see more work on consumption ethics per se. The conclusions about consumption—Eat organic! Be vegan! Buy fair trade!—are generated by premises about production. The arguments always spend a lot of time on production and then comparatively little on why they derive any consumption conclusions. It’s 20 pages of argument about farming chickens and then a paragraph at the end that tells you it’s wrong to eat McNuggets.

Can you talk a little more about consumption ethics and benefiting from wrongdoing? For example, many vegetarians don’t eat meat because they are against the killing of animals for food, yet they might still be using shampoo or make up that is made with animal products, or they still might wear a leather belt or wool sweater that involved an animal suffering to produce that item.

Yes. Here’s a way of thinking about it: Vegans and vegetarians often think that eating meat is morally wrong. Some are vegan or vegetarians for health reasons alone, but most vegans and vegetarians I know also believe their practices are morally required. You ask them why it’s wrong to eat meat and they say something like:

But this is a weird argument. Even if you think that meat production is wrong, why would that show that meat consumption—a totally different activity—is wrong too?

Here is one idea:

Meat is wrongfully produced.
Eating meat benefits from meat-production.
It is wrong to benefit from wrongdoing. Therefore,
It’s wrong to eat meat.

But arguments like this don’t just apply to eating meat. As you note, they also apply to activities like wearing animals whose skins were wrongfully produced or using shampoos that were wrongfully tested on animals since wearing and shampooing are ways of benefitting from wrongdoing.

Arguments like this also apply to activities that have nothing to do with animals, such as wearing clothes wrongfully made by child laborers.

The arguments might also apply to activities that have nothing to do with consumption. When you admire the pyramids, you benefit from ancient Egyptian slavery. A standard part of the case for reparations regarding slavery is that white Americans even now benefit from wealth accumulated immorally years ago. More oddly, the view that it is wrong to benefit from wrongdoing seems to imply that having jobs like being a homicide detective or studying the Holocaust is wrong since they are ways of benefitting financially from the wrong of murder or the Holocaust.

Faced with examples like this, someone might say that it isn’t always and everywhere wrong to benefit from wrongdoing, and then try to figure out when and why it is wrong to benefit from wrongdoing. Or they might try out some new idea about how to connect the wrongness of production and the wrongness of consumption. That’s one topic I’ve been working on recently.

What are you working on next?

I am not a vegan. I have been struck by how tolerant of this my vegan friends are. If I order some non-vegan food at a restaurant, they never even try to talk me out of it. Why not? According to them, I am making a serious moral mistake. Why is it permissible for them to let me do—what they think is—wrong? Generally, when it is permissible to let others do wrong? Why is that permissible? I’ve been working on a paper about this for a little while and I think the topic is great.