Vermont farms have built up a massive phosphorus surplus—one that is growing at an estimated 1,500 tons per year—as farmers continue to import large quantities of animal feed and fertilizer, a new University of Vermont study says. 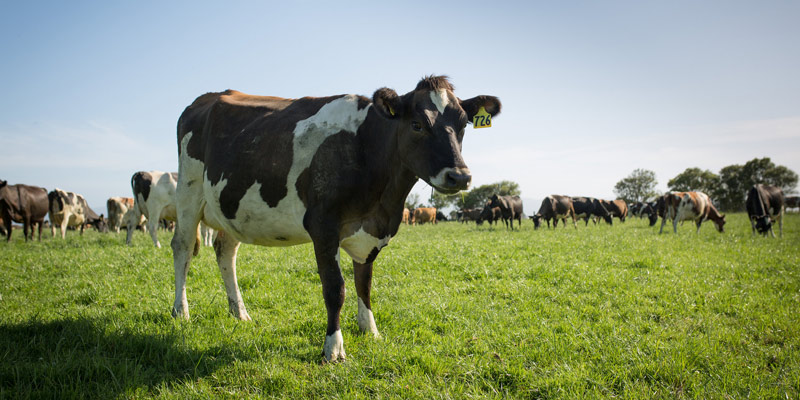 The study is the first to estimate the build-up of agricultural phosphorus in Vermont, which is the largest contributor to phosphorus pollution. It finds the state has accumulated between 1,000 and 4,500 tons of surplus phosphorus annually for nearly 90 consecutive years, creating a nearly 240,000-ton “legacy” that hinders phosphorus-reduction efforts.

“These findings reveal the magnitude of Vermont’s phosphorus problem—and show that our efforts to deal with it need to consider the phosphorus entering our state, and not only the part that washes into our rivers and lakes,” says lead author Michael Wironen, a PhD researcher at UVM’s Gund Institute for Environment, and the Rubenstein School of Environment and Natural Resources.

“We have been building up phosphorus in our farm soils for nearly a century, but still import it by the truckload,” he says. “That makes it harder to reduce runoff.” The study was published in the journal Global Environmental Change.

Soil phosphorus matters because fields can only absorb so much. Moderate phosphorus levels help increase crop yields, but elevated levels significantly increase the risk of runoff, which contributes to algae blooms and other water quality issues.

While Vermont’s phosphorus surplus peaked in the 1950s—during an era of federally subsidized fertilizer—phosphorus continues to accumulate at high rates in major agricultural counties, including Franklin (454 tons per year), Addison (314 tons per year) and Orleans (285 tons per year). Despite major increases in efficiency, the surplus persists.

According to researchers, animal feed imports surpassed fertilizer as the primary phosphorus source entering the state in the 1980s. Of the 3,250 tons of phosphorus that entered Vermont in 2012 alone, farmers imported three times more animal feed (2,475 tons) than fertilizer (774 tons).

“This was surprising,” Wironen says. “Fertilizer has long been thought of as our main source of phosphorus.” Fertilizer imports are tracked by state officials, but animal feed imports are not.

The study also highlights the dramatic intensification of farming in Vermont. Between 1925 and 2012 (the last year of available data), livestock density per acre of farmland has increased 250 percent. Average milk production has also jumped—from less than 5,000 pounds to more than 20,000 pounds of milk per animal – an increase of nearly 500 percent. “That only happens by feeding animals like high performance athletes.”

As a “win-win,” researchers say farmers can reduce phosphorus imports—and save money—by adopting precision feeding. This involves providing feed that meets the nutritional needs of livestock without exceeding their daily phosphorus requirements.

“Studies show precision feeding can reduce phosphorus imports by 10 to 20 percent through greater efficiency,” says Wironen. The researchers recommend that precision feeding be made a requirement of the Nutrient Management Plans (NMP) that most farmers are required to produce as part of the state’s Required Agricultural Practices.

Another key recommendation of the study is for the Agency of Agriculture, Food, and Markets to collect soil phosphorus data—which farmers include in Nutrient Management Plans—and make it available to scientists and state agencies. The issue is currently being debated by Vermont lawmakers.

“Knowing which fields are saturated with phosphorus, and most likely to produce runoff, is imperative,” says co-author Jon Erickson, UVM’s David Blittersdorf Professor of Sustainability Science and Policy. “Otherwise we are shooting darts at a blank board. There are ways to make this data available for science while protecting farmers’ privacy. It would save taxpayer money and help prevent runoff.”

Vermont is required to reduce phosphorus pollution to meet the requirements of the EPA’s Total Maximum Daily Load (TMDL) restrictions for the Lake Champlain and Lake Memphremagog basins.

Wironen is a PhD candidate in the Economics for the Anthropocene program, a research partnership between UVM, McGill University (Quebec) and York University (Ontario).

The research is made possible with support from the Social Sciences and Humanities Research Council of Canada, the Lintilhac Foundation, and the Robert and Patricia Switzer Foundation.

-Basil Waugh is the communications director for UVM’s Gund Institute for Environment.

This story was first published by UVM’s Gund Institute for Environment.