Are Insects the Next Frontier in Sustainable Food?

For most people, these words don’t evoke the thought of gourmet cuisine. Two UVM graduates are hoping to change that.

While entomophagy (eating insects) is not a common practice in the United States, these and other insects are culturally accepted components of many global cuisines and there is growing interest in incorporating “micro-livestock” into our diets to reduce the environmental impact of the food system. 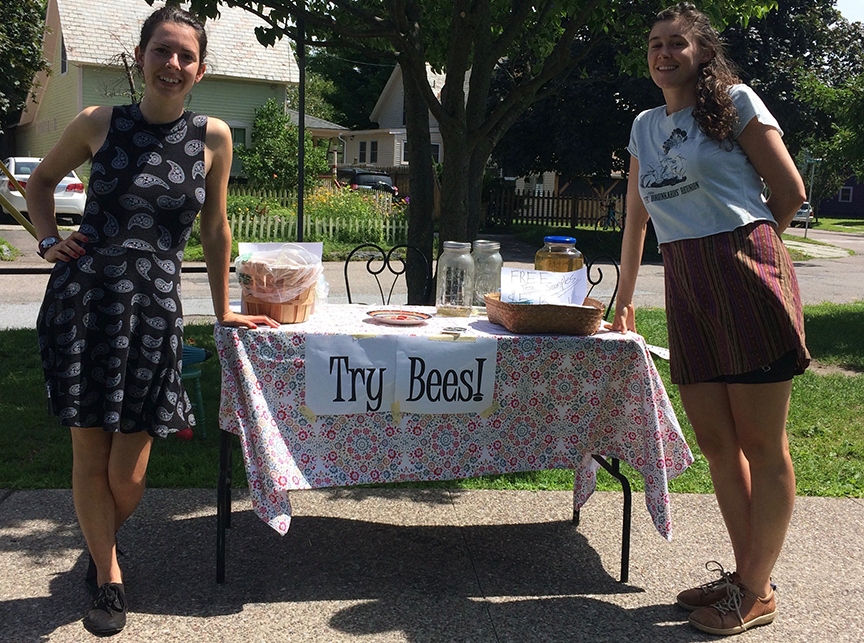 As undergraduate students, Kitty Foster (UVM ’16) and Julia Lees (UVM ’17) became intrigued by the idea of edible insects and began raising and cooking with mealworms. Last year, they interned at a cricket farm, where they got an inside look at the business side of this emerging field.

Over the summer, they founded Laroua Foods, which specializes in processed insect-based foods. Their debut product, “bee butter,” featured bee larvae blended with spices into a pâté-like spread. They were able to distribute this product as a recent festival in New York City called Brooklyn Bugs.

The bee larvae have a high fat profile, which they say gives it a great taste. Edible insects also tend to contain high levels of protein, fats, zinc, magnesium, and iron, making them nutritious as well as sustainable. Mealworms in particular are high in omega-3 fatty acids, at levels approaching those found in salmon.

“When we started, we thought we were unique and were unaware of other edible insect businesses in the United States,” says Foster. “We quickly realized that there are actually a good number of folks working on this across the country—and yet, the supply is not keeping up with the demand.”

The idea of starting with the bee larvae product came from Lees’ dad, who is a beekeeper. He mentioned that honeybee larvae are edible, and that some people manage varroa mites (a parasite) in their colonies by removing infested larvae from the hive. So Foster and Lees set out to find Vermont beekeepers who manage their hives this way, and convinced a few to send their extracted brood to them.

“It was a challenge to figure out how to get them out of the comb,” explains Lees. “Finally we figured out that if we froze them, they were easier to break apart.”

The business partners, who became friends while attending a sustainable design/build program, feel strongly about marketing a processed product, rather than whole insects, because it’s easier for people to get past the initial gross-out factor.

Indeed, talking seriously about eating insects is likely to elicit giggles and squirms from most Americans, but Foster and Lees are serious about the potential for entomophagy to change the conversation about our food future.

“Our goal is to make insect-based foods popular to increase diversity in our food system. I think diversity means resilience, and it is interesting to explore new ways to feed ourselves, ” says Foster. “We think the most effective way to gain acceptance from the public is to market them as gourmet foods, because their popularity will spread from there.”

Foster and Lees say that the future of Laroua Foods depends on where their research and business partnerships take them. They are continuing to build relationships with Vermont beekeepers, and are exploring a mealworm-based product.

“We need efficient, sustainable, nutritious food,” says Lees. “Insects can be that.”