New Research Sheds Light on Crystals and Grittiness in Cheese

Chemistry starts in the kitchen.

Gil Tansman remembers those words spoken by his mother when he was a young boy. Now the UVM doctoral student repeats that exact phrase as he talks about pursuing his passion for science and food.

Tansman, who is working toward his PhD in food science, recently helped identify the presence of ikaite and struvite crystals in artisanal cheese, giving cheesemakers new and valuable information on how to refine their product, understand which conditions will cause crystals to form, and help consumers appreciate the scientific elements of cheese. 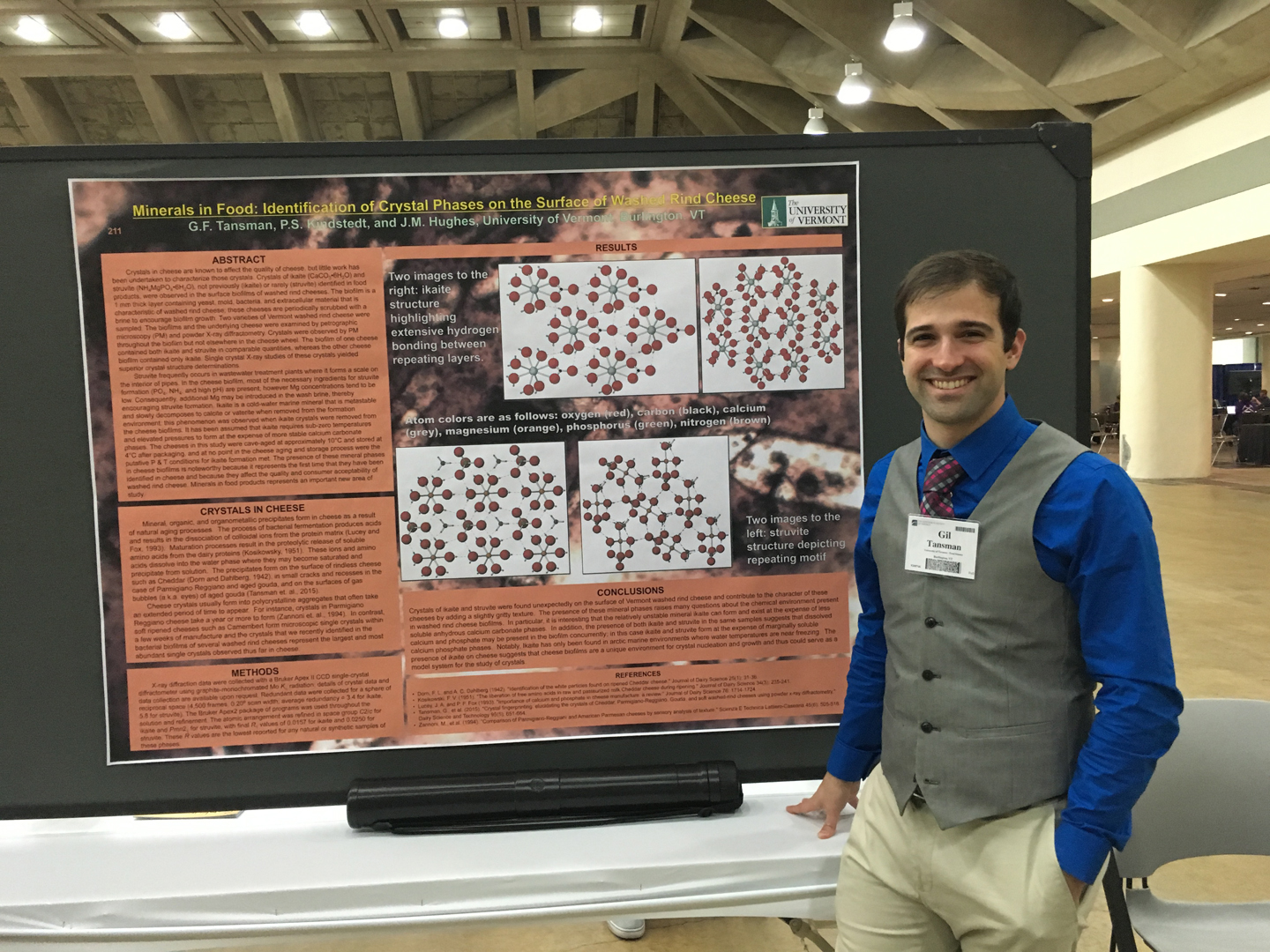 “Cheese has been made for thousands of years, and soft, pungent washed-rind cheeses similar to those in this study have been produced for hundreds of years or more. Cheesemakers are the beneficiaries of an ancient tradition, but even to this day we don’t understand all of the processes that affect cheese aging. Cheese crystals form spontaneously on washed-rind cheese during aging and can often impart a gritty texture, but the source of this grittiness had never been identified until now,” says Tansman, a Florida native who earned a master’s degree in food science from UVM before going on to pursue his PhD. “Our findings were surprising because the crystals that we identified are quite rare in nature. Nonetheless, consumers of washed-rind cheese have probably been ingesting these crystals for centuries.”

A Breakthrough for the Cheese Industry

Their research paper, “Minerals in Food: Crystal Structures of Ikaite and Struvite from Bacterial Smears on Washed-Rind Cheese” will be published in The Canadian Mineralogist.

Food contains inorganic elements and compounds that are important for human nutrition and human health, according to the UVM research. These substances have been investigated and characterized in many foods for their nutritive value, however, little is known about the crystal phases that form in foods.

“As in any commercial food product, it is imperative to identify all the components of the material that is being consumed by the public. The crystals that grow during cheese aging were not previously characterized, but now they have been identified through the work of Gil Tansman and Dr. Paul Kindstedt,” says Professor Hughes, whose role was to provide expertise in the X-ray component of the research.

The Complexity of Cheese 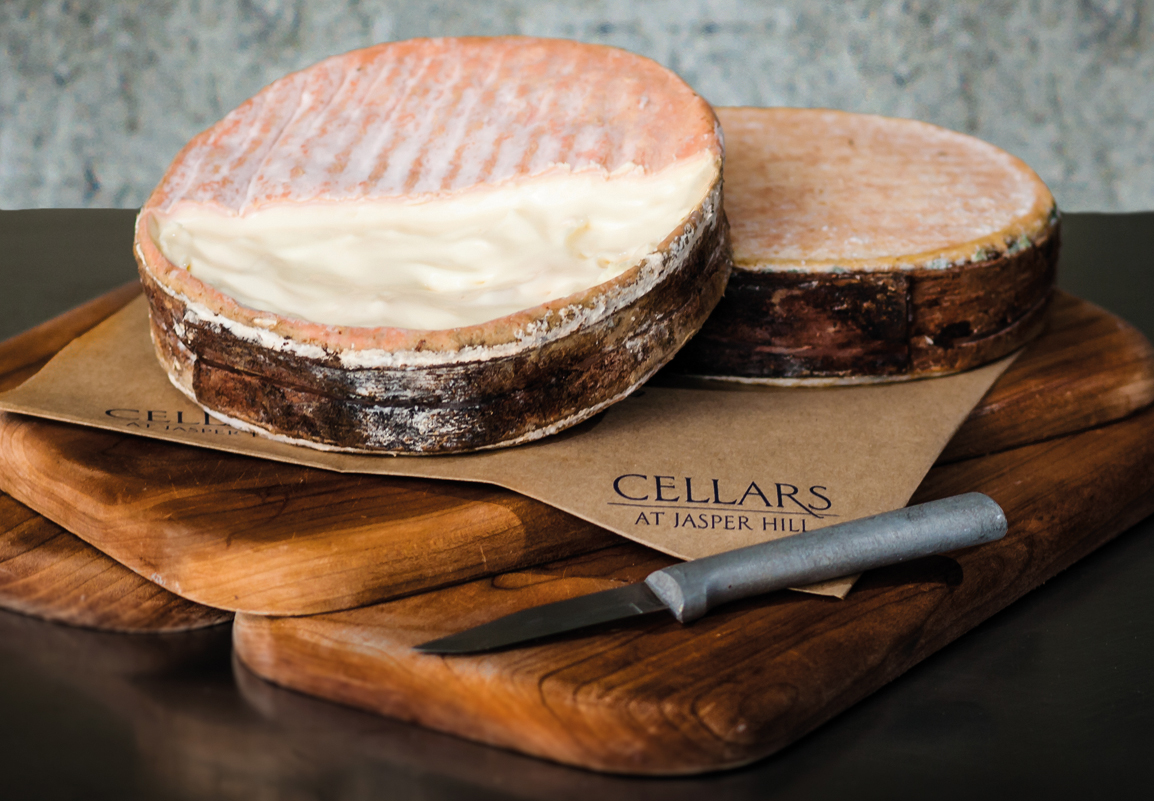 Grittiness and the growth of minerals in washed-rind cheeses is something cheesemakers are sensitive about, according to the UVM research. While a moderate amount of grittiness contributes to the complexity of the cheese and is potentially desirable in certain markets, an abundance of grittiness tends to lower the desirability and salability of cheese. The cause of grittiness has never been fully explained, according to the UVM research, but anecdotal evidence suggests that certain traditional manufacturing practices are used to limit the manifestation of grittiness.

Ikaite has been observed almost exclusively in very cold marine environments, while struvite has been found in organic-rich environments such as guano caves. Both are likely associated with a gritty mouthfeel in washed-rind cheese.

“Having now identified the materials that grow during the cheese aging process, the next step is to experiment with how to control what materials occur and also control the size and number of crystals to enhance the final cheese product,” Professor Hughes says.

Their research also notes that crystallization in cheese is a phenomenon that has the potential to differentiate long-aged artisanal cheeses from lower cost, conventional alternatives. Exploring strategies used to accelerate or repress the formation of these crystals in order to tailor the cheese to specific markets is good news for cheesemakers.

“There is no conclusion at this point as to how exactly to control the formation of crystals through cheesemaking practices, but we are excited about this new research into what the crystals are and under what conditions they are likely to form,” says Zoe Brickley, who manages sales and marketing at Jasper Hill Farm. “The connections Gil is making around the crystals he has identified are the first step toward the kind of understanding that might allow us to refine our process and control the sensory attributes of our cheeses, which can only increase their value for flavor.”

For Tansman, he anticipates that the UVM research will also inspire consumers. He hopes that new information about cheese crystals will boost consumer appreciation by enhancing the unique, scientific story behind artisanal cheese and other foods.

“My hope is that we can create a more scientifically engaged society through food, because the science of agriculture and food is something that is readily accessible to the public,” Tansman says. “When I was young, I remember my mother saying that ‘chemistry starts in the kitchen because that’s where everyone can experiment.’ With a bit of curiosity, even those without scientific training can use the kitchen as an informal laboratory. All one needs is an interest in how food works to be engaged in the science of food.”