Ever since Lisa MacDougall founded Mighty Food Farm in Pownal a decade ago, she dreamed she’d someday own her own land.

After a mighty move, that dream is now a reality: MacDougall, through help from the Vermont Land Trust, now owns 155 acres on Rod and Gun Club Road, prime agricultural land that will be permanently conserved. 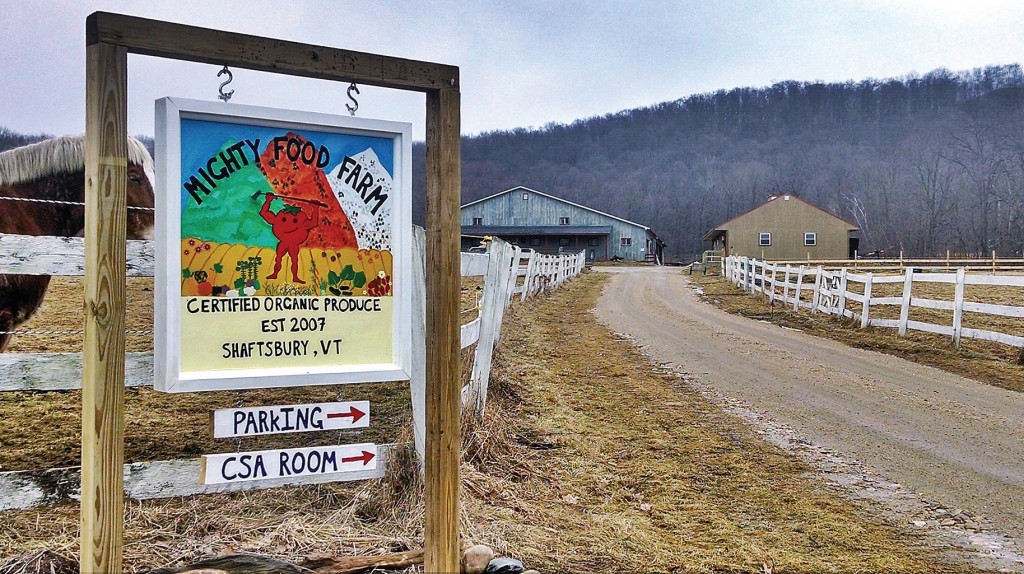 The new location will let her make her operation more efficient, manage the soil for years to come, and continue to grow great vegetables.

“When I first saw it, there was no doubt in my mind—I wanted to be here,” MacDougall said at the farm on Saturday.

It took about eight months to complete the move, carried out while MacDougall and her team sold produce at farmers markets and distributed to the 200-plus members of the farm’s community supported agriculture program. Seven greenhouses, a total of 12,000 square feet, were reassembled. About 20 acres of farmland are now ploughed. And a newly-built barn will house produce washing and CSA pickups.

The farm’s roots trace to 2006, when MacDougall began leasing land on Cedar Hill Road in Pownal. A native of eastern Massachusetts and University of Massachusetts, Amherst graduate who studied plant, soil and insect sciences, she had searched for a permanent home for several years. Offers on five farms weren’t accepted because they were below the asking price. Affordability of land is a barrier for farmers, especially those who are just starting out, she says. And she credits the Vermont Land Trust for making this happen.

“There’s no way I could have done this without them,” she said.

A Farmer Dedicated to Land Management and the Consumer

The organization purchased the Shaftsbury farm in 2015 from Owen and Kathy Beauchesne, with the intent of conserving it through its Farmland Access Program, according to Donald Campbell, regional director for the Montpelier-based nonprofit. MacDougal was chosen in a competitive business proposal process. A conservation easement, funded by grant from the Vermont Housing & Conservation Board and the USDA, and individuals’ contributions, offset the cost of the land. MacDougall, through VHCB’s Farm and Forest Viability Program, received business planning support, according to Executive Director Gus Selig.

The Beauchesnes had thought about conserving their farm for almost a decade, according to Campbell. He said they had taken immaculate care and it pleased them to know that the hard work they put into the land would benefit MacDougall and future farmers to come.

“Lisa is very deserving of this,” Campbell said. He praised her for a strong work ethic and dedication to land management and the consumer.

Vern Grubinger, a vegetable and berry specialist at University of Vermont Extension, called MacDougall “one of Vermont’s best young vegetable farmers” who is excellent in production, marketing and stewardship of the land.

“I have watched her farm enterprise grow in recent years and I’m thrilled that she now has the opportunity to own the kind of farmland that will sustain her business into the future,” Grubinger said.

“Everything is centrally located,” she said.

MacDougall said she will continue growing the same amount of acreage. But with more available land comes an opportunity to rotate crops each season, which she says is key to maintaining the soil quality.

A newly-built barn has more space where produce can be washed, and includes a walk-in cooler. A small retail space is where CSA members can pick up their shares.

Looking forward, MacDougall said she wants to continue to build her business and tweak her process.

“I’m always looking for ways I can do better,” she said.

-Edward Damon is a staff writer for the Bennington Banner, where this story was first published.