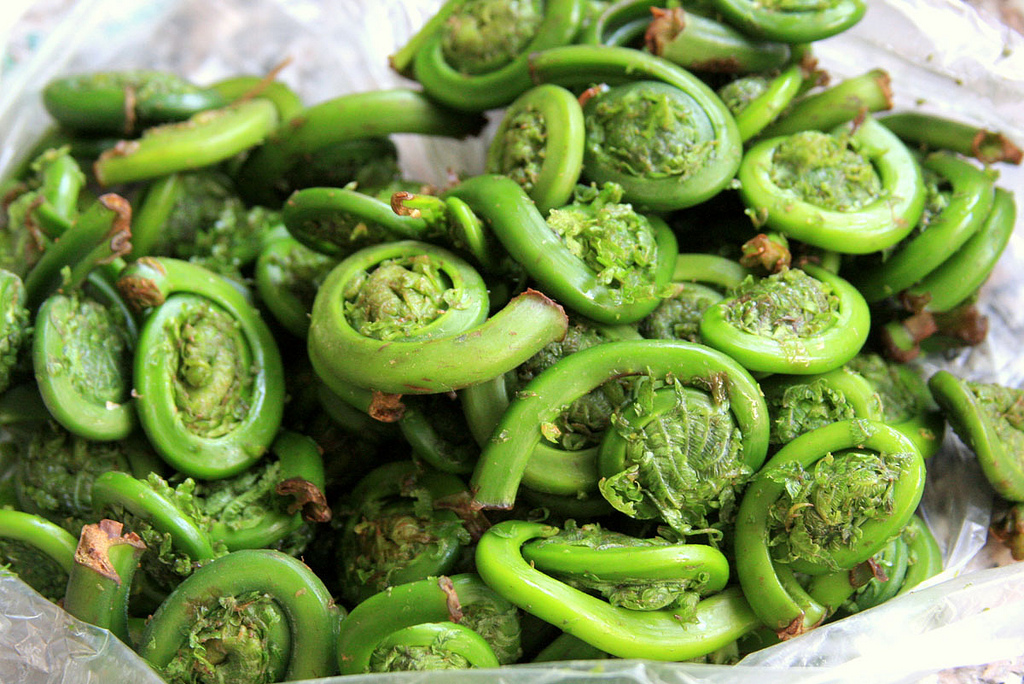 Fiddlehead ferns, the young coiled leaves of the ostrich fern (Matteuccia struthiopteris), are an early spring delicacy, appearing along the banks of rivers, streams and brooks in April and May. Fiddleheads are abundant in New England and Eastern Canada, where prepared they are considered a traditional dish.

To harvest, wait until the fern rolls are approximately two to three inches above the ground; cut or break off from the stem and remove the papery brown scales. To prepare, rinse or boil fiddleheads in potable water until the water appears clean.

Fiddleheads have a very delicate flavor, and are often served steamed or boiled with a light dressing; due to the short season, fiddleheads are also commonly pickled or preserved .

This simple recipe comes from the Vermont Wildfoods Cookbook, published in 1990 by the Vermont Game Warden’s Association. This cookbook is available in the University of Vermont Department of Special Collections (call number: TX751 V47 1990).

Boil fiddleheads in water and discard water, and then boil again until tender.

Fry salt pork which may be cubed or sliced. If sliced, break into small pieces after frying. Remove crisp pork from frying pan and add vinegar and water to pork drippings. Heat and then add crisp pork to fiddlehead ferns and pour dressing over them.

What is your favorite way to prepare fiddleheads?