Vermont First recently held its first student symposium designed to celebrate and learn about farm-to-institution and the career paths within the food system. Vermont chefs, entrepreneurs, farmers, and other leaders in the field gathered in October to discuss current food systems issues, celebrate UVM Dining’s efforts in supporting local farmers, and meet students pursuing careers in these areas. 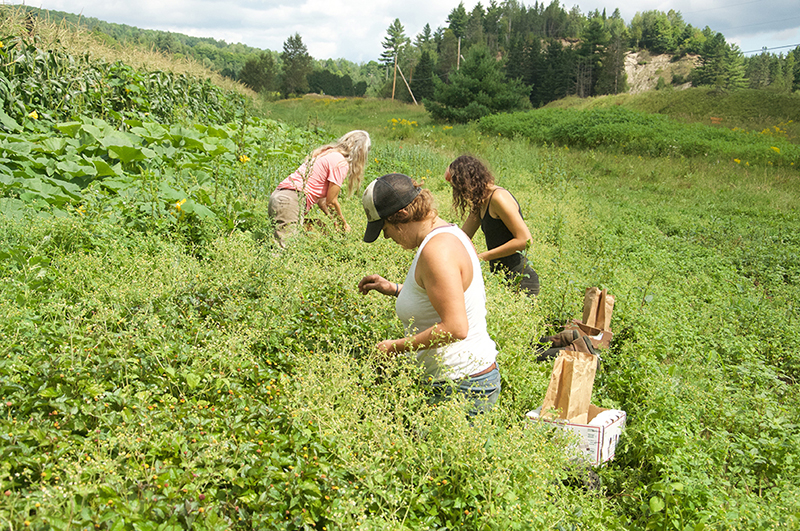 The day kicked off with a warm welcome and overview of the day provided by UVM Dining’s Sustainability Manager, Marissa Watson. Watson began the day by encouraging students, producers, and partners to utilize this opportunity to engage with one another and build new relationships. She then introduced the keynote speaker of the day, author and farmer Ben Hewitt. Hewitt has written six books on agriculture and food, including “The Town that Saved Food.”

He began by sharing an anecdote about his neighbor Martha, an older farmer who he and his children bale hay for in return for her providing hay for his sheep. Hewitt spoke highly of his neighbor, praising her hard work and her commitment to stewarding the land. Hewitt described the tragedy of the food system, which is that it requires little of us, but that we require it in order to survive. This lack of compassion allows us to often forget the true root of sustainable agriculture which is our connection to the land. Hewitt told the audience that he loves to bale hay because it requires hard labor and self-reliance, which is an act of protest against the convenient, mindless farming methods employed in industrial agriculture.

“Everything Comes From the Soil”

He then finished his speech by offering audience members 14 tips of advice to reclaim your liberty. Hewitt employed moments of humor as well as pauses of gratitude to share this message: remember that everything comes from the soil. Lastly, he finished by sharing the true satisfaction of farming and encouraging everyone to get outside as often as they can. Hewitt instilled these final words to the audience: “There is no better way to reclaim culture and liberty than to produce good, nourishing food in fair, responsible ways.”

Following Hewitt’s keynote address was a panel highlighting case studies of innovation within the Vermont food system. This panel included Heather Darby, UVM Extension Associate Professor whose areas of expertise include soil sciences and environmental stewardship. Darby described her role in Extension, which includes aiding farmers and processors in achieving their goals by utilizing applied research. She shared her story of living in Vermont throughout her life and having to watch the environmental degradation of Lake Champlain, as well as the decline in numbers of farmers. Similarly to Hewitt, Darby instilled the need to take care of our soils and preserve them for future generations. She emphasized this need as especially vital due to the changing climate.

Alongside Darby was Mateo Kehler, cofounder of Jasper Hill Farm, an artisan cheese company that creates its own cheese as well as matures cheeses for other producers. He described his company as a group of activists working in response to a globalized food system. Kehler explained his desire to redefine cheesemaking by supporting independent cheesemakers and preventing consolidation of the market. “Consolidation stifles innovation,” Kehler told the audience.

Joe Bossen, founder of Vermont Bean Crafters and All Souls Tortilleria, was also sitting at the panel table. Bossen described himself as “an advocate for people’s palates,” which is how he found his niche in the market by producing organic heirloom tortillas made from scratch. Bossen emphasized the need to preserve heirloom varieties, as well as creating a market for crops that consumers are not currently accessing.

Theresa Snow, founder of Salvation Farms, also contributed to the panel. She described “food as a lever for social change” in which we are able to capture food not reaching the market and provide that food to vulnerable populations. Snow emphasized the need to create a more inclusive food system that undermines the power of corporate control. Through a research study done in 2016, Snow discovered that 15 percent of production was being left on farms. She utilized this data to create Salvation Farms and begin the process of creating a more regional food system. Following this panel discussion, the group broke out into a quick networking session, where students were able to speak one-on-one with the panelists.

It was then time for a lunch break, in which the theme was to “Close the Loop.” Watson returned to the podium to describe this theme, which aimed to reduce food waste and instead redirect any food scraps to be composted rather than going to a landfill. Prior to the lunch, producers lined up in front of the audience to share what they had provided for the lunch. This included ice cream from Wilcox Farms incorporated into the Caramelized Apple Compote, chicken from Maple Wind Farms incorporated into the Pulled Chicken Salad on a Baguette, and many more delicious options. The group then moved into the Central Campus Dining Hall to enjoy the meal.

Careers in the Food System

Following lunch, representatives from Vermont Farm to Plate, Jake Claro and Kristyn Achilich, took the stage to briefly discuss career pathways in the food system as well as the Food Sector Job Growth report. The data from the report indicated that jobs within the food system comprise one of the largest growing sectors in Vermont. Achilich offered insight to Vermont Farm to Plate’s new available resource, Career Profiles, which details the many pathways of a food systems career as well as qualifications needed, salary, and more information about these positions.

The final panel of the day featured five actors pursuing different careers within the food system. Helen Labun, executive director of the Vermont Fresh Network, spoke about her non-linear career path. She described jumping from job to job in the field of rural development, and then finally landing her current position where she works to connect chefs to local farmers. When asked what advice she would give to students, Labun encouraged students to take time for themselves away from their career and not to feed into romanticizing the notion of overworking yourself.

Alongside Labun was Christa Alexander, co-owner of Jericho Settlers Farm. Alexander spoke of her experience working currently as the harvest manager as well as the wholesale manager at the farm. She described the difficulty of having a constantly changing schedule, as well as the immense gratification she feels from farming. Alexander recommended students find a career in which they love and to be a problem solver in whatever position you take on.

Annie Myers, founder of Myers Produce, discussed her experience owning and operating a new business. She founded the company after working in the restaurant industry in New York City, in which she discovered a disconnect between farmers and restaurants. Myers decided to create a business in which she could connect restaurants that were looking for local food to farmers who were looking for a market to sell their produce. Myers’ advice to students: “create the job that you want.”

At the end of the panel was Steve Schubart, owner of Vermont Grass Cattle Company who also works to source local meat for Walden Local Meat. Schubart’s day in the life was a bit different than the other panelists, which includes rotating cattle three times a day as well as working online for Walden Local Meat. He encouraged students to embrace failures as opportunities to learn a new lesson.

Sarah Langan, executive chef of Culinary Education at UVM Dining, spoke on her experience working on the culinary side of the food system. Langan shared her extensive background working in restaurants across the globe, ultimately landing back in her home state of Vermont to follow her passion of teaching students. She described the busy atmosphere of working in a dining hall that serves hundreds of meals a day, and being constantly on her toes for what comes next. Sarah closed the panel by inspiring students to be open to whatever journey their career and life may take them.

The day finished with a final career networking session in which students could speak to panelists and representatives from across the state. Employers present included Farm to School, Intervale Food Hub, Vermont Agency of Agriculture, and more. As food systems continues to grow as a field, connecting students to innovative organizations offers an opportunity to build professional relationships as well as open up new understandings of the evolving food system.

-Anastasia Tsekeris is a senior pursuing degrees in Nutrition and Food Sciences and Food Systems. She is an intern with UVM Dining, and has worked with several local organizations including the Vermont WIC Program, the Winooski Farmer’s Market, and the Intervale Food Hub. Anastasia is very passionate about increasing food access to marginalized communities as well as empowering consumers to make healthy decisions regarding food.