Produce Safety: What does it mean for farmers and consumers? 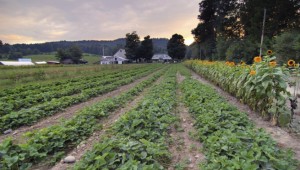 For the first time in U.S. history, the production and distribution of fruits and vegetables will be regulated by the federal government in an effort to prevent foodborne illness related to the contamination of produce. The Food Safety Modernization Act of 2011, the most sweeping reform of food safety laws in more than 70 years, gives the Food and Drug Administration the responsibility to write the produce safety rules that growers and processors must follow.

Yet it’s still unclear how those regulations might affect Vermont growers and consumers.

“Produce has never been regulated, so this is completely new for the produce industry,” according to Lynn Zanardi Blevins, M.D., M.P.H., a medical epidemiologist and clinical assistant professor of medicine at the University of Vermont. She teaches courses in UVM’s online public health certificate program and collaborates with UVM Extension faculty on produce safety projects.

Blevins understands Vermont growers’ concerns; they believe the FDA rules are designed for large-scale agriculture, not the small farms of the Green Mountain State. They fear “the produce rules will put them out of business.”

Yet after having worked for 10 years for the Centers for Disease Control and Prevention (CDC), she also recognizes that “food safety is a concern for every farm. Growers try to prevent pathogens from getting on the produce in the first place. For example, they need to pay attention to when they spread manure, allowing sufficient time before harvest. Workers need to wash their hands, not work when they are sick, and not handle food when they have an exposed and open cut.”

Unpacking the risks of food contamination can be complicated. For starters, 68 percent of outbreaks have been traced to food from restaurants or delis versus only 9 percent linked to food from private homes, according to the CDC. And though an estimated 46 percent of cases are attributable to produce, those cases tend to be less severe than foodborne illness associated with other commodities such as poultry. Leafy greens – because they are usually eaten raw – are the most common source of produce contamination, the CDC says.

The UVM Extension Center for Sustainable Agriculture’s Produce Safety Program therefore works closely with growers to be proactive about produce safety, Blevins says. “We say to growers, ‘Let’s implement the practices appropriate for the scale of our small and diversified farms as a way of protecting our very thriving local food system.’ ”

With produce-related foodborne outbreaks featured in the media, consumers might be confused by what’s safe to eat – and what isn’t. Blevins offers these clarifications regarding produce safety, no matter how the new federal regulations are implemented in Vermont:

Meredith King is a freelance writer from Burlington, VT. This piece was originally published on the UVM BrainWaves blog under the title “UVM Helps Farms, Consumers Find Middle Ground on Produce Safety.”