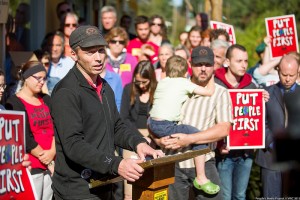 There are nearly 60,000 people working within the food system in Vermont. By coincidence, it’s estimated that 60,000 people in Vermont lack access to paid sick leave. While not the entirety, food system careers make up a large portion of jobs lacking this basic right.

This year, Vermont has the opportunity to align the movement for local, sustainable, and healthy food with work with dignity. The Earned Sick Time bill (H.208/S.255) is currently under consideration by the Vermont state legislature, providing our state the opportunity to ensure that Vermont’s food system also supports sustainable communities and healthy families through guaranteed paid sick time.

A local food system that doesn’t include sustainable labor practices misses the heart and soul of the movement by excluding the very people who support families and communities with food system jobs. Is an ethically raised restaurant meal or organic, GMO-free tomato truly sustainable if the person stocking or serving it was forced to sacrifice their health because they can’t afford to take a day off work? 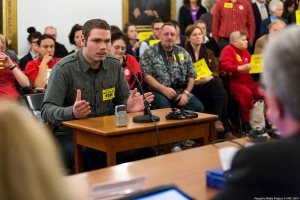 At the Vermont Workers’ Center, we believe that everyone deserves time off to get well or care for loved ones, everyone has the right to work with dignity—including grocery store cashiers, waitstaff, dishwashers, line cooks, farmers, packers, and other people that bring our food from farm to plate. That’s why we’ve partnered with Voices for Vermont’s Children on the Paid Sick Days Campaign to encourage Vermont residents to make their voices heard.

So what makes food system workers—the cashiers, runners, stockers, and dishwashers, the heart and soul of a local food movement—come to work sick? And why is it risky for them to speak out?

A survey by the Food Chain Workers Alliance in 2012 sheds light on these questions. They found that the majority of food system workers (65%) came to work sick because they couldn’t afford to lose a day’s pay. Other reasons for coming to work sick included fear of losing their job or being threatened by an employer that they would lose their job if they took an unpaid sick day. This fear prevents people from taking care of themselves and their families, and puts our food system at risk.

Many local food system entrepreneurs value the intersection of good food and good jobs and have become vocal champions. Randy George, owner of Red Hen Bakery, now views paid sick days “like minimum wage laws, the 40-hour work week, and other similar laws. This is a benefit that will benefit us all as a community.”

Yet Randy doesn’t operate his business in a bubble. He, alongside every other local food business, competes with larger corporations from a national food system operating here in Vermont. In other words, somebody else is baking the buns at McDonald’s who doesn’t have paid sick leave. Guaranteeing a minimum of 7 annual paid sick days for all is a step towards leveling the playing field between local and multinational corporations, and neutralizing the division between businesses that want to do the right thing and mega-corporations with no real interest in the health of our communities.

So where do things stand now? On February 11, 2014, H.208 passed out of the House General, Housing, and Military Affairs committee with a 6-1 vote, and is now in House Appropriations before going to the House floor.

Vermont must end this disparity and injustice within our food system by supporting both healthy food and healthy people. Now is the time to speak up in support the Earned Sick Time bill and stop the trend of neglecting people who work in the food system.

Heather Pipino is a development organizer at the Vermont Workers’ Center.