A Necessary Paradigm Shift in Food and Farming

Our world is in a bit of an uproar these days.  Never before have we seen so many challenges come to the fore simultaneously.  Here in Vermont, we are very fortunate to live in a rather civil society, especially when we consider the toxic political environment that we see on the national level. 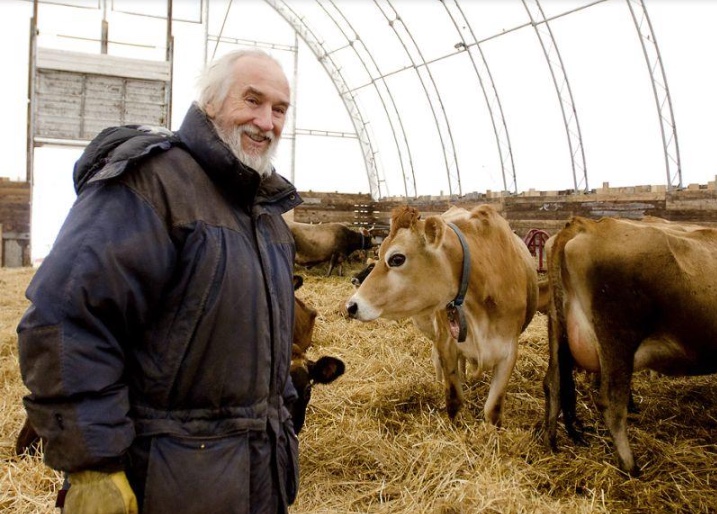 We still have plenty to worry about right here in our own state, however.  Hardly a day goes by without some mention of water quality and environmental pollution in the news. This past August we saw some of the worst-ever blue green algae blooms in Lakes Champlain, Carmi and Memphremagog.  Fingers were pointed, and the usual blame game transpired.  In the last month, the Department of Agriculture has come under fire for lax enforcement of water quality regulations.  Some legislators want to know why farmers are exempt from Act 250 jurisdiction. The question of who and how we will pay for Lake Champlain cleanup looms large.

The state’s dairy farmers, both organic and conventional are in the poorhouse.  Vermont’s iconic dairy industry has been in an economic pinch for some time.  The prices farmers are paid for the milk they produce are well below the costs of production.  Until recently, organic dairy production has been an economic lifeline for many producers, but for the first time ever, organic prices have dropped as much as six dollars per hundredweight in the last few months.  Quotas have been imposed on organic milk production further lessening farmers’ income potential.  Stress levels on dairy farms continue to increase as farmers find they cannot pay their bills.

Meanwhile, retail outlets that sell dairy products are in a war for market share.  Something as nurturing as food becomes a “sale item” like a television set or some other consumer good.  Food prices are lower than ever while the cost of production back on the farm continues to rise.  Why is it that cheap food is standard fare here in America?  This madness all began in the years following World War II. After the lean years of the 30ss and food rationing during the war, Americans were ready to eat.

At the same time, chemicals like nitrates and phosphates that had been used in the making of munitions were repurposed as agricultural fertilizers and pesticides. By 1950, a new industrial agricultural revolution was in full swing. Crop yields climbed, farms consolidated, and meat consumption increased. Tractors completely replaced horses for motive power.  As agriculture became more mechanized, people began to leave their farms and rural communities for more opportunities in urban and suburban areas.  If one is looking for the beginning of the long decline in rural America, look no farther than the 1950s.  The green revolution was underway.

At first, this transformation seemed like an absolute miracle.  Bugs and weeds were no longer a major problem because they could be sprayed away.  The old-fashioned method of farming with its emphasis on diversity, crop rotation and manure usage gave way to continuous monocrops of corn or soybeans supported by chemical fertilizers and herbicides.  As acreages of commodity crops increased, beef feedlots in addition to confinement hog and chicken facilities grew to consume the inexpensive grain. Because of these new-found efficiencies, the price of basic food staples like milk, beef, poultry, and pork dropped to new lows while our standard of living climbed.

Very few people in American society questioned this so-called “progress.” Throughout the early 1960s, farm machinery continued to increase in size and capability.  Here in Vermont, the milk can gave way to the bulk tank, which drove even more farmers from the land. Surpluses of farm produced commodities began to create a boom and bust cycle on American farms. Those who could survive the downturns, bought out their neighbors.

In 1962, Rachel Carson released Silent Spring, which challenged the common acceptance of DDT and other farm chemicals.  For the first time ever, the concept of “better living through chemistry” was questioned.  The seeds of a burgeoning environmental movement were first planted as people like J.I. Rodale (Organic Gardening) and Charles Walters Jr. (Acres USA) began publishing their respective magazines. The 70s and 80s saw the growth of ecological and organic agricultural practices on a very small number of farms. Outfits like OCIA (Organic Crop Improvement Association) offered some of the first organic certification programs.  Our local certification group, VOF (Vermont Organic Farmers) was born out of an OCIA chapter in the mid-80s.

Thirty plus years later, a very strong organic farming and local food movement has been established here in Vermont.  Conventional dairy farms have begun to implement conservation practices like cover cropping, no-till seeding, riparian buffers, and direct manure injection.  Climate issues have come to the forefront more than ever before.  We all know there is too much CO2 in the atmosphere and that we must do whatever we can to reverse the bleeding of carbon into the air.  Plants have tremendous potential to sequester carbon through the process of photosynthesis.

Think back to junior high earth science when we learned about photosynthesis, the magical process of plants harvesting sunlight, atmospheric carbon dioxide and water with the help of light absorbing chlorophyll to produce sugars in the plant sap.  These simple sugar compounds are biologically transformed into the carbohydrates and proteins necessary for plant growth.

The least known benefit of photosynthesis that we were never taught in school is that plants produce carbohydrates beyond what is needed for stem and leaf growth.  These surplus sugars are translocated to the roots and released as exudates of “liquid carbon” to the biological life in the soil below.  This unseen and rather underappreciated realm of the root can sequester tons of carbon from the atmosphere.  Soil left bare and exposed to the elements will work in the opposite direction and release CO2 to the air.  Borne out of this realization is the old-becomes-new-again practice of cover cropping which ensures that plants and roots are growing in the ground between annual crops like corn, soybeans, and small grains. Every time you see a green hued harvested corn field planted to winter rye, you are witnessing cover cropping and agricultural regeneration at work.

Radical Changes in the Name of Carbon Sequestration

After 40 years of plowing, working the land, and planting crops on our organic farm, we have made some radical changes in the name of carbon sequestration.  We have cut back on tillage and grain production and switched to 100 percent grass-fed organic dairy.  This was not an easy decision.  Through testing, we compared the organic matter and soil health of our permanent grasslands to our actively tilled (and rotated) grain fields and found extreme differences in soil quality between the two.  The permanent grasslands tested out at 8 to 9 percent organic matter while the fields that had been cultivated and planted to organic wheat, barley, soybeans, corn, and clover barely broke 2 percent in the organic matter department.

This was the beginning of my “conversion experience” to a reduced tillage, biologically based system of agriculture.  I have come to realize that every time we pull a piece of steel through the soil, be it a plow, disc, or field cultivator, we are slicing up the very fungal threads (hyphae) that coexist with bacteria and other soil organisms that help us feed plants without chemicals and soluble fertilizers. The added benefit to minimizing or eliminating tillage is the reversal of carbon being released into the atmosphere.  Remember the ability of those happily growing plants, exuding surplus sugars (from photosynthesis) into the earth below.  Feeding the unseen soil biology has an incredible capacity to heal the planet.

Changing lifelong habits is never easy, but is necessary if we want to have a habitable world for our children and grandchildren.  We need to do everything possible to put the biology back into all of agriculture.  On our own farm, this has led to increasing our permanent grasslands and reducing grain production. What grain we do grow will be grown no-till so that we can protect and improve our soil. Growing crops organically without plowing and herbicides is the new frontier in organic farming.

On conventional Vermont dairy farms, this means less continuous corn, more grass, and annual cover cropping. As soil biology increases, the need for chemical inputs will eventually decrease.  Everyone can enhance carbon sequestration in their own small way.  Even a lawn can restore carbon into the earth by being mowed less often, allowing plant roots to fully develop and exude carbon.

Switching to a biological system of agriculture will be costly. Food will have to cost more to pay for these carbon and climate improvement services because industrialized farming methods have minimized soil biology in a quest for higher yields and cheaper food.  Still, when we think of the billions of dollars that have been earmarked for Lake Champlain cleanup, these practices seem rather inexpensive and quite doable compared to the massive infrastructure that has been recommended to solve our pollution problems.

And one last thing….the divisiveness that has been sown between the organic and conventional farming communities about the subject of regeneration in agriculture will no longer be necessary if we can all think of biology first and foremost.  Enhancing the realm of the root with practices like cocktail cover cropping will reduce the need for toxic chemicals in agriculture.  We will all have to do our part. By choosing food that is produced with the intention of enhancing soil biology and water quality, consumers can support farmers who practice these regenerative methods.  We all need to develop a genuine “carbon consciousness.”

Nature has the potential to heal the Earth. The answers lie below the soil’s surface. Think about it the next time you are food shopping.