Roaming the hills and back roads in Vermont at this time of year, you find plenty of apple trees. Most are wild trees, also called seedling trees, spread by wildlife or from dropped apples. Their genetics are a wild card mix of apple DNA. Like people, each seedling tree is unique.

Also in Vermont, next to the remains of old homesteads and stone walls, or tucked within regrown forests, you might find what’s left of a 19th- or early-20th-century orchard full of heirloom varieties that were carefully selected and cultivated but whose names have long been forgotten.

For apple enthusiasts of all kinds, these wild and “lost” heirloom trees are like presents waiting to be opened. Not all of them will be what you hoped for, but occasionally, one will be. 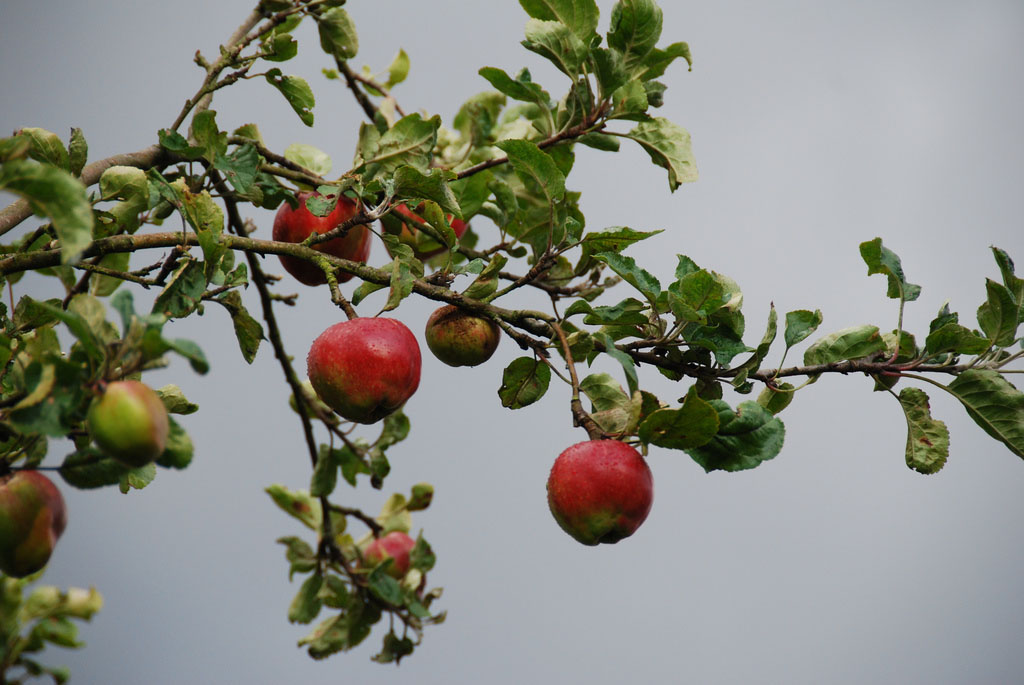 Colin Davis and Dave Dolginow, co-founders of Shacksbury Cider in Shoreham, are two of Vermont’s biggest apple enthusiasts. In 2013, they launched the “Lost Apple Project” to find old trees that could help revive the great American cider orchard. They sampled apples from over a thousand trees around Vermont—both wild and heirloom—and selected dozens to ferment into hard cider. Of those batches, five apple varieties had the hard cider qualities they liked, such as dryness, acidity, and the right amount of tannins and aromatics. Their 2013 hard cider “The 1840,” made from these “lost” apples, was a Good Food Award winner.

Colin and crew cut new growth twigs called scion wood from the five trees they liked and grafted those onto rootstock to create hundreds of new apple trees that were recently planted at Sunrise Orchards in Cornwall. Grafting scion wood onto rootstock or onto existing trees ensures that the new trees or new branches will have the same flavor as the tree from which the scion was collected. The rootstock of the tree instills characteristics such as cold hardiness and height into the new tree.

Some of the scion wood collected by Shacksbury Cider was also grafted onto existing trees at Windfall Orchard (also in Cornwall). Brad Koehler, owner of Windfall, is also a wild and heirloom apple enthusiast, with 80 different apple varieties in his orchard. He makes ice cider, as well as a Farmhouse Hard Cider in the English hard cider tradition, dry and lightly effervescent. Like Shacksbury Cider, Windfall uses wild yeast for fermentation.

A New Crop of Apple Enthusiasts

Renewed interest in making hard cider at home has also prompted a whole new crop of apple enthusiasts. Hard cider apple varieties are having a resurgence in nurseries for the “grow-it-yourself crowd.” Orchardists are planting blocks of heirloom trees to meet the needs of this growing market, and hard cider workshops and talks are filled to capacity.
Not all of today’s apple enthusiasts are looking for the next best cider apple, though. Many people want to restore some of the forgotten varieties and their history to our modern-day palettes.

Apple trees took thousands of years and thousands of miles to travel from the apple-forested hills of Kazakhstan, where they are believed to have originated, to the maple- forested hills of Vermont. Like the European honeybee and dandelions, they were brought to the new world by the European colonists and to Vermont in the 18th century. Nearly every farm and homestead had apple trees, and often a whole apple orchard. Some of these were seedling trees, but many were grafted trees of known varieties. There were apples for fresh eating, for cooking, for drying, for storage, and to fill the cider barrels in the cellar.

Apples—and hard apple cider—were key components of the 19th-century Vermonter’s diet. Our Vermont predecessors relished the different flavors, the storage capability, and the uses for each variety.

In November 2015, a group of 50 or so apple enthusiasts congregated at the home of Dan Breslaw in Corinth and took in a talk by John Bunker, founder of Fedco Seeds in Maine, about the importance of finding “lost” heirloom apples. The group dubbed themselves the “Vermont Apple Detectives” and created a listserve so they could stay in touch about varieties they might discover in the future. Although the group is just getting started, members hope to organize tastings, scion wood exchanges, and grafting workshops in the future.

Still other enthusiasts are looking for “lost” heirlooms and wild apple trees not just because of their flavor and history, but because of their cold hardiness and disease resistance. Orchardist and nursery owner Nicko Rubin, of East Hill Tree Farm in Plainfield, grows, grafts, and sells a number of different apple tree varieties old and new, including those for cider and fresh eating. He focuses on tree varieties that do well in

Vermont and are disease resistant. He’s discovered a seedling tree that is great for fresh eating and stores well but produces apples that are relatively small as apples go. Because he discovered this wild tree, he gets to name it. He calls it “Juice Box.”

Vermont’s most famous apple is perhaps an elusive one called the “Bethel,” which originated in the town of Bethel sometime in the 1800s. Buzz Ferver, landscape designer and nursery owner from Perfect Circle Farm & Nursery in Barre (and another apple enthusiast), recently shared with me the Fairmount Nursery and Fruit Farm Catalog from 1888 (E.E. Andrews, Proprietor). In the catalog, Andrews talks about the Bethel as a choice winter variety, excellent in flavor. For his part, Nicko has a 100-plus-year-old Bethel tree on his farm from which he propagates and sells new trees. He likes the Bethel for its “firm and sweet fruits, which are good well into winter.”

It’s not easy to find the next great apple. Colin Davis from Shacksbury Cider likens it to winning the lottery. In the old days, those lottery wins were shared with friends and neighbors. It’s not surprising then, that when a Franklin man found an exciting apple tree growing in his field and had it patented through one of the big national nurseries, he raised the eyebrows of some Vermont apple enthusiasts. Patenting counters the tradition of sharing the apple lottery with others, who can then freely propagate it, and it also promotes the idea that life is patentable. The tree, called the Franklin Cider, will soon be on sale through Stark Brothers.

So the next time you come across apple trees growing along a fence row or on the side of the road, go ahead and take a bite. (An apple is ripe when the seeds inside are brown.) Don’t get discouraged if it’s a “spitter.” If it’s dry and acidic, it might make a great hard cider. If it holds onto the tree well into December and seems to get sweeter over time, it could be a great storage apple. Then let your friends and other apple enthusiasts know. You can also register “lost” trees on Shacksbury Cider’s website and be part of their Lost Apple Project. Share your discovery. You never know when you might find the next great apple.

-Nancy Hayden is an artist, writer, and organic farmer. She and her husband own and operate The Farm Between, an organic fruit farm and fruit nursery in Jeffersonville.

This piece was originally published in Local Banquet and was posted on the UVM Food Feed with permission.