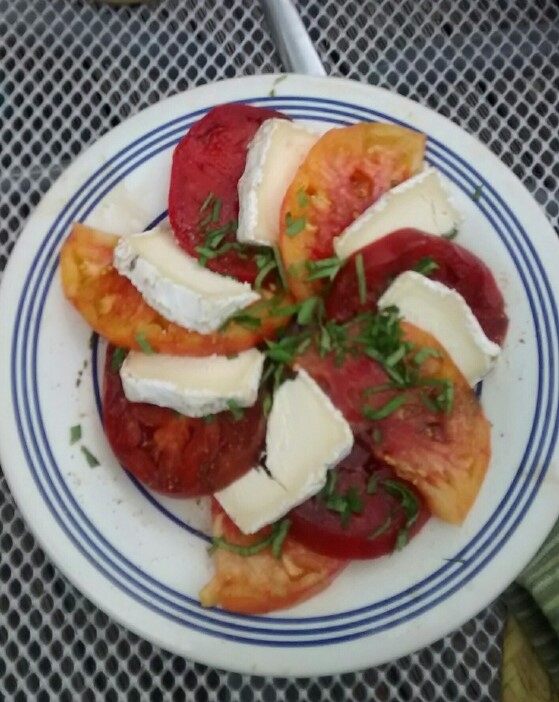 Chefs Justine and Esteban spend their days asking what’s happening to good food. They rail against the loss of seasonality, foodies who treat food as too precious, and taste buds that don’t remember simple, elegant flavors.

Tomato season is winding down, and what a wonderful season it’s been. Succulent beefsteaks, sweet cherries, and thick romas, fresh-picked and still warm from the sun; with a dash of salt, this is probably the best taste in the world. Food writer Raymond Sokolov wrote during a long train ride from northern Europe to Greece that in his whole dining career, he’d never tasted anything as good as when he bit into the red, ripe tomato an old woman handed him when he stepped out of the train car .

Vine-ripened Vermont tomatoes are plentiful at all the farmer’s markets now, and Vermonters are rushing to preserve the bounty by transforming these delectable orbs into sauces, salsas, chutneys, and relishes. Filled Ball jars line pantries up and down the state, as we try desperately to preserve a little summer for the long, cold winter ahead.

It’s a wonderful but brief season, a month if we are lucky. So our query today is this: why on earth are restaurants and caterers still using pink, hard, tasteless winter tomatoes on their menus?

Exhibit One: Several weeks ago, we went to a big catered celebration at a gorgeous venue. This was a fancy meal, no DIY potluck here. Grilled fish, succulent steak, asparagus—don’t get us started on this one—and tomato Caprese (thin slices of mozzarella, layered with fresh tomatoes, a hint of olive oil, and chiffonade of basil). In season, it’s just delicious. In this case, however, the tomatoes were plastic-y rounds of tasteless sponges wedged, between disks of soft cheese. Just dreadful. But why, oh why?

Exhibit Two: A week later, at a fine-dining French restaurant in Montreal, we were thrilled that the menu featured a local tomato vinaigrette salad, which was heavenly. The other dish we ordered was a savory roasted chicken, with a side of thin, lightly salted French fries. But get this: the dish also had tomatoes, but they were the pale-wedges-of-cardboard kind. “WTF,” we said. How can a reputable restaurant, in the height of summer, whose chefs know how to prepare good food, put two different kinds of tomatoes on the same table?

What’s going on out there? It’s bad enough that we suffer through these commodity tomatoes in the winter, but now in summer, too? Are fresh tomatoes too expensive? Have the purchasers and chefs in these places turned into robots and only order from the list? Are fresh summer tomatoes considered “exotic” now? Are our tastebuds so far gone that we no longer know the difference anymore?

If we’re supposed to settle for these punky disks of fiberboard, we think it would be better to not eat tomatoes at all. They add nothing to the dish; in fact, they detract from it. If chefs can not get it together enough to reach out to local farmers and source the gorgeous Brandywine, Green Zebra and other tomatoes abundant this time of year, they should forget putting them on their menus at all.

We all need to stop and smell the tomatoes (because only summer tomatoes actually smell!).

What can we do? We say boycott factory tomatoes. Bring back summer tomatoes! Just say no to tasteless, odorless, colorless globes of nothing.

Here’s our recipe for a Caprese salad. Make it now before the first frost!

Sprinkle with salt and pepper