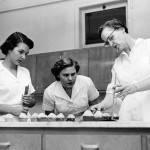 Lately, the question of reviving home economics in schools has been surfacing in newspapers and on radio broadcasts. Should middle and high school students take time away from math, literature, and art to study cooking, budgeting, shopping, and sewing? While I have reservations about the ways in which home economics has been taught in the past, I believe that such a revival could yield great benefit, if done well, because of the much needed emphasis on food literacy in public education.

Whether or not we should bring back home economics hinges on another very important question: What is the relationship between cooking and health? Is there, as some have noted, a connection between the decline of home cooking and the rise of obesity? Numerous reasons explain why home cooking almost always leads to healthier eating. Fresh, perishable foods simply contain more nutrients and fiber, as well as less sodium and sugar, than do highly processed foods (designed, as they are, to have a shelf-life). Another reason home-cooked food leads to healthier eating is because when we cook, we tend to do so for each other (who likes to cook just for him or herself?). Partaking of meals with others, family-style, tends toward healthier eating. If cooking, in fact, has an impact on health, then we would do well to consider the home economics question in light of this fact. 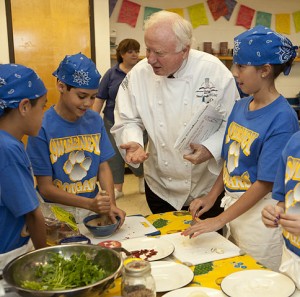 So should we bring back home economics? I say “yes,” but with a caveat. We should not simply revive it; rather, we should reinvent it. Instead of the traditional limited focus on how to read recipes and use measuring cups properly, the new home economics should equip students to better understand and engage with the larger food system. Where food comes from, how it is processed and distributed, and what policies have helped shape the foodscape we inhabit—these are all questions that will help the younger generation understand the implications of their food choices. In the new home economics, students might learn to read food labels and recipes not just for caloric value and fat content, but for the impact of business and policy on food production that plays itself out in the choice of ingredients.

Why not give students an opportunity to grow some of the produce they cook, spend some time with the farmers who raise the livestock they transform into meals, and take a behind-the-scenes tour of a grocery store that supplies the classroom’s staples? Why not teach them some of the traditional food preservation arts such as canning, drying, and fermenting, and why not provide training in the ancient and increasingly fashionable art of foraging? Industrial food processing has made many of these skills seem obsolete, but in an age when our food depends on an increasingly unstable supply of fossil fuels, these skills are more important and promising than ever. What is more, there is even an opportunity to turn these skills into a livelihood, as traditionally grown, foraged, and preserved foods can demand a high premium at restaurants and farmers’ markets.

As an historian, I can’t help but hope that history would also play a role in future home economics curricula. Understanding today’s food environment in the larger context of the historical processes that have shaped it—the mechanization of food production, the commercialization of food products, and the rise of industrial agriculture (not to mention hearth cooking, historical food controversies, and changing understandings about the relationship between food and health)—will help students to deconstruct their food world as well as better understand the possibilities for its future.

Schools in many states are pioneering farm-to-school programs where young children learn to appreciate the tastes of fresh fruits and vegetables, have a hand in growing them, and, in some cases, preparing them. When elementary school children with this background arrive in middle and high schools, they will be ready to build on their basic food education, and the schools they enter need to be ready for them. It is my hope that knives, forks, and mixing spoons will function as more than utensils for cooking and eating in future home economics classrooms; that they will serve as tools for forging a deeper, more engaged food literacy for an upcoming generation that will inherit a broken food system they will be uniquely positioned to repair, reinvent, and renew.

Abigail Carroll is the author of Three Squares: The Invention of the American Meal (Basic Books, 2013). She holds a Ph.D. in American Studies and has taught in the Gastronomy Program at Boston University.