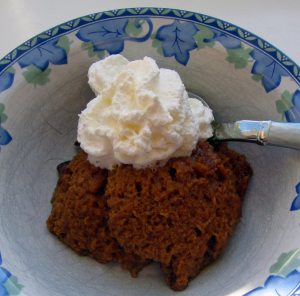 Indian Pudding, despite the name, is not a Native American dish. New England colonists adapted English hasty pudding, traditionally made with wheat flour, oatmeal, or ground rice, by using the indigenous New World “Indian meal” (cornmeal) and adding molasses and milk. Although now thought of as New England regional fare, before 1900 it was included in most American cookbooks. There are many variations of this recipe, including everything from sugar and butter to dried fruit and spices.

This recipe variation gives a Vermont spin on Indian Pudding by replacing molasses with Vermont pure maple syrup. It was published in 1974 in The Vermont Maple Syrup Cook Book, which is available in the University of Vermont Department of Special Collections.

Put milk and corn meal in a double boiler and cook for 15 minutes. Stir in the Maple Syrup and cook 5 minutes more. Remove from heat, and add remaining ingredients. Mix well, and pour this batter into a greased baking dish. Bake in a slow oven (325°) for about 2 hours. Serve hot with cream or a Maple sauce. Or, to follow an old New England custom, serve it with vanilla ice cream.