No Free Lunch in the Food System? Land, labor, and energy substitutions in agriculture 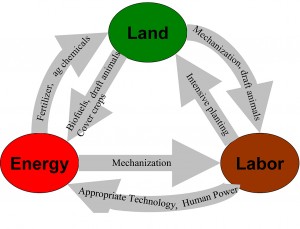 In the last 100 years, energy use in the U.S. food system has increased dramatically. On the other hand, labor and land needs per unit of food output have declined precipitously. The increase in land efficiency has not only resulted in more food, but less land dedicated to crops. This illustrates how there is a certain level of substitutability between land, labor, and energy. Increase one, and you can decrease the others, resulting in different trade-offs.

By way of example, Vermont has seen a monumental increase in forest cover  since the late 1800’s, coinciding with a dramatic decrease in the number of dairy farms in the state.  During this time,  larger farms in the bottomlands started producing more food as a result of using more energy, thereby driving down costs and putting small marginal farms in the uplands (where the land was not conducive to mechanization) out of business. In this way, greater energy use resulted in less labor use (fewer farmers), and marginal land being taken out of agricultural production. 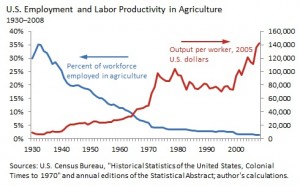 As an environmentalist, I am glad for the forest, and I am glad that farmers in the United States no longer plow the precarious slopes that they once did, which caused serious erosion and topsoil loss. On the other hand, increased energy use in the food system has contributed to climate change and made the price of food as vulnerable to the political climate in the Middle East as it is to the weather on farms. Furthermore, nitrogen fertilizer use, which has been the largest single factor in increased yields of most crops, has had substantial ecological consequences, including eutrophication of local waterways (including portions of Lake Champlain) and increased greenhouse gas emissions from soils.

In the example of Vermont dairies, we could reverse the substitution by moving back to a grass-based model. Feeding less grain and corn-silage to cows would reduce milk produced per acre, but also reduce fossil energy use by reducing fertilizer use, energy use in farm buildings and by tractors for plowing, planting, harvesting, and for spreading manure. In this case, the extra land needed could come from “marginal land” that cannot be used to grow crops, but can grow great pasture.  More small dairy farms would also require more labor to handle the cows.

Technology plays a large role as well. Since the last time VT dairy farming was pasture-based, huge improvements in grazing management have been achieved. By using moveable electric fencing and managed rotational grazing, pasture production can be improved dramatically, with a small input of energy (to manufacture the fence and run it) and a small input of labor, often 15 minutes a day or less.

Unstable energy prices, climate change, water contamination, topsoil loss, and high unemployment suggest that our food system has gone too far in substituting fossil energy for land and labor. While we cannot eliminate the existence of tradeoffs, appropriate technologies can reshape them, and improve our efficiency in using all the resources available to us.