The Quiet Buzz of Wild Bees 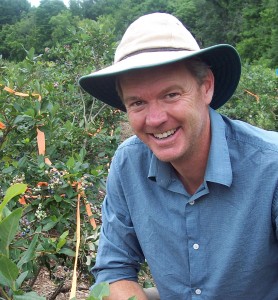 Have you been enjoying eating blueberries this summer? If yes, you can thank wild bees. How much thanks do they deserve? Well, that’s a question being asked by Professor Taylor Ricketts, Director of UVM’s Gund Institute for Ecological Economics.

“Most people think the domesticated honeybee is the only insect that pollinates crops,” explains Taylor. “In actuality, honeybees are only one species of many that perform important pollination services for our food system.”

There are over 250 species of native bees in the Vermont alone. While honey bee declines have gotten a lot of news lately, wild bees are also in danger from pesticides and land use change  That’s important because scores of these wild  bees play a role in pollinating food crops. Just how big a role?

“That’s the big question we’re aiming to answer,” Taylor explains. “What is the value of wild pollinators to Vermont’s food system?” To answer that, Ricketts and his team are looking at the role wild pollinators play in the production of some of Vermont’s iconic crops. To begin, they are focusing on blueberries grown on 15 farms in the Champlain Valley. 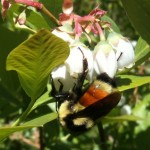 Earlier this spring, the researchers surveyed bee diversity and abundance on these farms to understand the range of species involved in blueberry pollination. The honeybee, it turns out, was hardly to be seen. While they did see a small number of butterflies and moths, Taylor estimates over 99% of agricultural pollination is done by bees. They found over 20 species of wild bees visiting blueberry flowers across those farms, and the farms with the highest pollinator diversity had over a dozen.  Others, however, had very few.  The idea is to understand what determines these differences in bee diversity: could it be differences in the surrounding natural landscape, which other crops are grown on the farm, or whether they are managed organically or not?

To measure the impacts of wild bees on blueberry yields, the researchers are piloting an experiment this summer that simulates 2 different pollination scenarios: an “ideal” scenario, where the bushes are pollinated by hand to simulate maximum pollination, and a pollination-limited scenario, where a bag is placed over the bush to prevent bees from accessing the bush to simulate a world without pollinators. The yields from these bushes are then collected, measured, and compared with the yields from a normal bush.  If the yields on the bushes that were hand pollinated are the same as the normal bushes, this means the blueberry plants at that farm are getting all the pollination services they need. If the yields are lower on the normal bushes, this means the bushes would benefit from more pollinators. 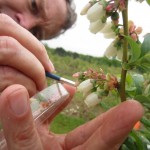 “The hand pollination is definitely the most comical part of this research,” Taylor chuckles, “because blueberries are buzz pollinated. That means they release pollen when bees vibrate their bodies at a certain frequency. An electric toothbrush vibrates at that frequency, so in the spring my research assistants were out there brushing the teeth of the blueberry bushes!”  After collecting that pollen in petri dishes, they used tiny paint brushes to pollinate their experimental flowers.

“The growers are really psyched,” Taylor says of the farmers he’s working with. They’re all interested to learn the results of his research, which could inform the management decisions they make on their farms. For example, many farmers keep honeybees to pollinate their crops. It might be that creating and conserving habitat for wild pollinators is even more important. So one factor for bee diversity may actually be how “messy” the farm is, as weedy strips or untilled ground provide key nesting habitat and food for many native pollinators. 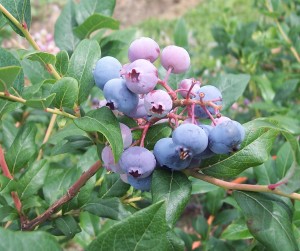 A perfectly manicured farm, it turns out, might not be appealing if you’re a wild bee.

When the results are in, we’ll have a better sense of how much of Vermont’s food production we can attribute to wild bees. In the meantime, Taylor says he’s going to make some blueberry pancakes.