Andrew Chignell is an Associate Professor in the Susan Linn Sage School of Philosophy at Cornell University. He visited UVM in May for a faculty workshop on the ethics of eating. We were intrigued by his work and asked him to share his thoughts on a food ethics question he’s considering.

I’m not really an ethicist, but I do teach a food ethics course, and I’ve become interested recently in the philosophical problem of the opportunistic carnivore. 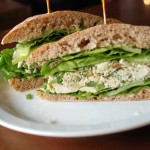 To eat or not to eat?

Here’s the problem in brief: suppose that what motivates you to avoid eating factory-farmed meat is ethical opposition to the suffering of sentient creatures, to the damage inflicted by factory-farming on the environment, and to the negative effects on workers and communities that are endemic to the industrial meat industry.

But suppose you also know enough about the food system to realize that it is insensitive to small- or even medium-sized changes in demand.  If 10,000 people in Burlington became vegetarians overnight, the restaurants, supermarkets, and ultimately the regional suppliers would eventually realize that they need to cut back on production.  But your occasional choice of the chicken sandwich over the vegetarian entrée is EXTREMELY unlikely to have any effect at all on production.  And so it will almost certainly NOT result in less suffering, or less environmental damage, or less human cost to workers and communities.

In such a case, some philosophers argue (and, I think, many people tell themselves) that your knowledge that your choice is extremely unlikely to have any positive effects justifies you in opportunistically eating the chicken sandwich if you so desire.  In other words, you can reasonably and even ethically go ahead and eat factory-farmed chicken, even though you are ethically opposed to the circumstances and effects of factory farming.  This seems paradoxical, but many philosophical arguments (consequentialist and even some rights-based accounts of ethical wrongness) give us this result.

I’m interested in working out how the moral psychology in such a case compares to that involved in other cases of systemic insensitivity to individual acts (voting, for instance), and also in seeing whether there is a reasonable way to defend the obligation that some of us feel we have to order the vegetarian entrée in such cases.  A broadly Kantian strategy suggests that in some cases it can be practically rational to “act as if” one’s individual action makes a difference even while knowing that it almost certainly doesn’t.  The question is whether this strategy can be worked out without ultimately advocating willful self-deception or wishful optimism.