Tongs, Tomatoes and Teaching at the University 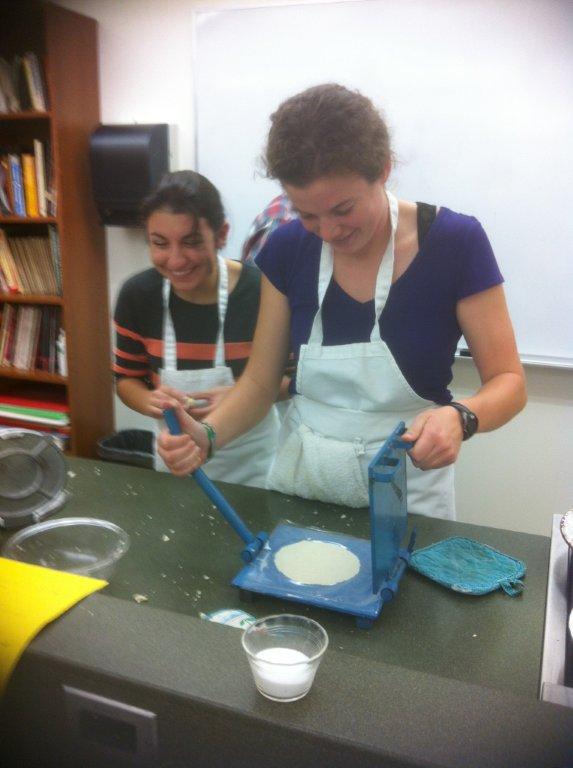 Burlington, VT, 2012. They stood up straight, white-bibbed aprons tied snugly around their waists, and nervously grabbed their razor sharp 10-inch chef knives.  The professor behind, a disembodied voice with a firm hand who guided as she said, “Hold the knife tightly, move your arm like this, and slice the carrot with a rocking motion…”

“This is so hard,” said the student next to the range.

“This angle is weird, I can hardly hold the knife,” she continued.

The professor walked around the food lab as other students offered comments.

“I’m not a very good cook…My specialty is scrambled eggs and baking brownies out of a box,”

Another interrupted, “Most of what I learned is from cooking shows.” 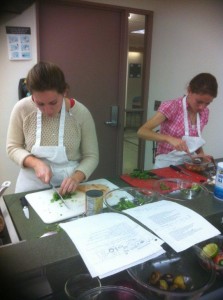 Smiling to myself, I nodded and gently returned their focus back to the task at hand, literally.  I felt their excitement, and trepidation about what they were about to learn.   Every time I start a class in my food lab, or more appropriately, my kitchen room, it’s like this – college students, completely out of their academic element, talking nervously about food. “This class,” I say to them, “is nothing like what you have experienced in college to date.  We will learn about the economics, environmental, health, and social aspects of our food system by immersing ourselves in the fast-paced environment of cooking, and when the semester ends, you will have not only sharpened your cooking skills but very importantly, your thinking skills.”

John Dewey believed that people need to do things in the world and the doing results in learning something that, if found useful they’ll carry it  along to the next activity hence the creation of the over-used phrase “learning by doing.”  Throughout Dewey’s time at his Laboratory School at the University of Chicago, he had a curricular focus on cooking as a way to “apply” his philosophy in the classroom.

It is with this understanding that my students and I approach our learning: that cooking and eating together is not only a didactic tool, but also instrumental in teaching us how to cooperate with and engage in our natural world and communities.

Early on, Dewey went beyond the philosophic notion of the synthesis of “static and mechanical categories”.  He believed it was a distortion from what actually occured in human behavior and experience. During his eight years at the Laboratory School in Chicago, Dewey’s emerging pragmatic belief supposed that, all learning was on a continuum and and knowledge was provisionally constructed by the mind in perpetual interaction with the world” In other words, there is no synthesis of the mind/body, subject/object, or theory/practice dualism but rather a seamless systematic stream of connections that ultimately leads to the making of meaning. 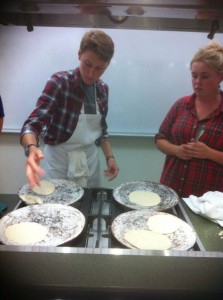 Every semester, my students and I embark on an “experience” that is seamlessly integrated between lecture and lab. My intent is to merge the two so content is introduced in action. My current inception of this kitchenroom “experience” is through a course called, Environmental Cooking, an exploration of global food system concerns and solutions.  I have taught many subjects in my kitchenroom, including political science, philosophy, and anthropology. The objective of this course is to wrestle with the often competing emphasis Americans place on food production, health and social well-being within a safe and healthy environment. The wrestling part for the students is the recognition that although our modern food system provides unparalleled productivity, it has become seriously tangled in unacceptable levels of diet-related health problems, food-borne disease, hunger and agricultural pollution. Through readings, discussions, presenting, and lots of cooking, the students move to consciousness about the depth and severity of the problems and realistically begin to touch on possible solutions.

The kitchenroom is an excellent medium for experiential education because it’s through the action of preparation and cooking and eating together that students begin to understand the subject matter.