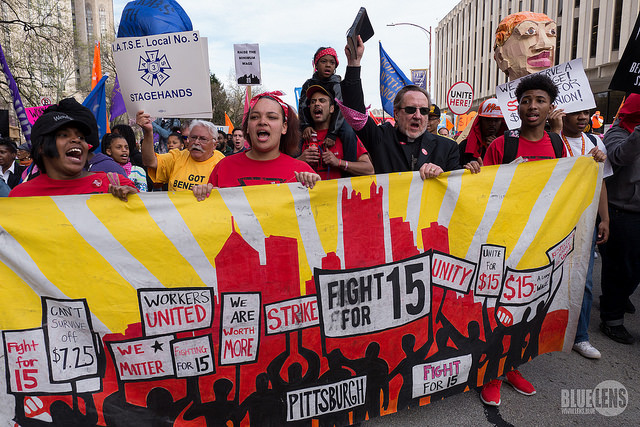 On July 22, Governor Cuomo of New York State announced a $15/hr minimum wage law for fast food workers in New York City and across the state. This unprecedented move happened as a result of almost 2 years of labor activism targeted at fast food companies like McDonald’s and Burger King, which have reputations for paying low wages while simultaneously raking in millions of dollars in profits year after year.

This is a big deal. A really big deal. Not just for fast food workers, but for low wage workers across the country.

When I started researching this blog post, I planned to write about how the #FightFor15 movement was launched in the food service sector, and the incredible traction it has gained in a short period of time. It has, and the story is inspiring, but as I learned about these initiatives, I realized they are fanning an already fiery debate about the relationship between wage regulation, poverty, and the overall economy. Suddenly, those burning questions felt much more pressing.

To better understand the big picture, I sat down with UVM economics professor Stephanie Seguino to learn more about the minimum wage, the potential impact on food security, and whether campaigns for higher wages are realistic for long-term economic health.

How does the minimum wage work?

Stephanie pointed out that the stagnation of the minimum wage, especially during times of economic growth, has occurred in sharp contrast to the rise in productivity—a factor directly linked to the rise in inequality: “Not only has the real minimum wage declined in value, but it has also not accounted for productivity growth among workers. The gap you see between wages and productivity growth has gone to profits.” The most recent example of this dynamic is that 95% of the economic growth between 2009 and 2013 went to the top 1%.

Considering that the minimum wage hasn’t been increased since 2009, it’s probably time for an upgrade. Even the Department of Labor supports raising the minimum wage. While policy proposals at the federal level have failed to make headway thus far, many states have enacted higher minimum wages (e.g. Vermont’s is $9.15/hr and scheduled to increase) and as the #FightFor15 has gained momentum, municipal policies have pushed the envelope even further: $15/hr wages will be in effect for the University of California system by 2017, Seattle by 2017, Los Angeles by 2020, and San Francisco by 2018.

To answer that question, let’s take a step back and ask a related, but different question: what does a worker need to earn to afford to live in the United States?

According to the federal government, the minimum wage is sufficient to keep a person out of poverty. But if we dig into the numbers, it quickly becomes apparent that the feds have a pretty skewed estimate of what it costs to live in the modern world. While the minimum wage provides a full-time employee with an annual salary that exceeds the federal poverty threshold for one person, the shocking reality is that federal poverty thresholds woefully underestimate the cost of living for an individual, much less a family.

Ready for the numbers? Here we go:

What if you have a kid?

What if you have a partner and 2 kids?

So what’s going on here? These discrepancies have everything to do with how the federal government calculates poverty. Stephanie explained: “The poverty threshold uses a food budget developed by the USDA that is called the “thrifty budget,” but it’s actually an emergency food budget not meant to endure for longer than 30 days. It very much underestimates the cost of a healthy food plan for families in the long term. The methodology was set in the 1960s and it persists today. What they found was that families spent roughly 30% of their budget on food, so the poverty threshold is the cost of an emergency food budget multiplied by 3. Today, food is only 15% of household budgets, so that’s another reason the poverty threshold doesn’t give a good measure of deprivation in the U.S. today.”

Cost of living indicators, like the MIT Cost of Living Calculator from which I pulled the numbers above, are much more nuanced. They consider factors like location, number of children, and whether one or two adults are working. This makes sense, given that different lifestyles require vastly different spending habits. Even so, Stephanie pointed out that living wage calculators make some pretty generous assumptions: for example, they might assume that the worker is working full-time and year-round, that the employer is contributing half the cost of health insurance, and that the worker is not contributing to a retirement plan or savings account. So it’s likely that the actual wage needed for a sustainable lifestyle is higher.

All this is to say, while the jump to $15/hr may at first glance seem drastic, these comparisons show that the current minimum wage of $7.25/hr is an insult, the Democratic Party’s campaign for $12/hr is insufficient, and even $15/hr may be unrealistically low. Depending on a person’s family size and situation, a wage that covers their cost of living may be closer to $25 or $30/hr.

The naysayers like to claim that raising wages will pinch businesses, causing them to cut jobs and hike prices. Stephanie begs to differ: “It’s not supported by economic research. The studies that have been done on cities that have living wage laws, and states that have adopted higher than the federal minimum, have not experienced job losses, and they have not experienced price increases. In fact, in a number of cases their employment increases. So how can that be? The answer is not all that surprising. When you raise minimum wages, you’re essentially redistributing income from those who have a lot to those who have very little. People who have more tend to save more. When you raise the incomes of minimum wage workers, they tend to consume that, and they often consume it locally, so it actually stimulates employment. By way of example, Vermont, which has one of the highest minimum wages in the country, has one of the lowest unemployment rates in the country. How could that possibly be if higher minimum wages cause job losses?”

Another factor is that many businesses that pay minimum wage can’t pack up and move overseas. Stephanie pointed out that “McDonald’s can’t move to China and still sell hamburgers locally. So when their minimum wages rise, they are forced to pay that.” And the benefits are clear: “Workers work harder because they feel they’re treated more fairly, they’re able to take care of their families better, and their stress decreases, so they’re more productive as a result of paying higher wages.”

A common misconception is that people who are food insecure and utilize the emergency food system are unemployed. The USDA Economic Research Service paints a different picture in their report Food Insecurity in Households With Children: “[In] 2010-11, 75 percent of households with food-insecure children had one or more adults in the labor force, including 60 percent with a full-time worker.”

The Bread for the World Hunger Report 2015 recommends raising the minimum wage as a key tactic for reducing hunger, and Stephanie agrees: “The evidence of all economic studies that I have seen shows that one of single most important ways of taking people out of poverty is to raise the minimum wage.”

Can we afford to pay workers higher wages?

Increasing the minimum wage requires the private sector to take more responsibility for covering workers’ cost of living. In fact, Stephanie explained, “some conservatives have argued that this is a way to reduce the role of government,” since so many low wage workers would be liberated from relying on federal programs funded by taxpayers.

Armed with this data and the perspective that Stephanie shared with me, I feel confident that there is no reason to have a minimum wage that isn’t a living wage. It’s clear we are overdue for some serious changes. So what’s holding us back from paying workers what they are due?

Right now, the political climate at the national level can’t accommodate rational debate on the subject. But that day may not be too far away. The #FightFor15 movement is helping shape the public discourse about worker compensation. Considering that almost 47% of minimum wage earners are in the food industry, it seems appropriate that fast food workers are leading the charge.

Providing dignified wages for American workers will require overcoming some significant hurdles, but Stephanie offered words of encouragement: “if you don’t put the issue on the table, it never even gets debated.”

Which begs the question: when can we start talking about a maximum wage?

*Many minimum wage workers are under-employed, either not working a full time schedule or not working consistently throughout the year.