Taxing Sugary Drinks: A win-win for public health and the farm economy?

The staggering amount of sugar we drink is making us sick. Cheap, widely-available sugary drinks—sodas, sports and energy drinks, “fruit” punches, and sweetened teas—are the largest single source of added sugars in the American diet. Sugary drink consumption has skyrocketed by five hundred percent in the last fifty years. All that liquid sugar is helping to fuel an obesity epidemic that is costing Vermont hundreds of millions of dollars each year to treat preventable illnesses like Type II diabetes, heart disease, and cancer. Now, a public health campaign in Vermont is promoting a potential solution.

While obesity has many causes, overconsumption of sugary drinks is a big one we can address using a proven public policy tool: the excise tax. Vermont’s excise tax on tobacco has succeeded in reducing smoking rates, particularly among younger consumers, and in raising revenue to fund other public health initiatives. Leading economists, including those at the U.S. Department of Agriculture, have long predicted that a tax on sugary drinks would have a similar effect. Raising the price of those drinks roughly ten percent could decrease consumption eight to ten percent. That decrease is significant: a person who reduces sugary drink consumption by one drink per day could lose fifteen pounds per year if they otherwise maintain the same diet and exercise routine.

Mexico—which has the world’s highest per capita consumption of sugary drinks and one of the highest rates of obesity in the world— implemented a tax on sugary drinks in January 2014. Early evidence demonstrates that Mexicans are now making healthier beverage choices as a result: sales of taxed sugary drinks have decreased by about ten percent while sales of bottled water are up thirteen percent and other untaxed beverages like milk and sparkling water have increased by seven percent. This month, the city of Berkeley, CA, became the first U.S. municipality to enact a similar tax. 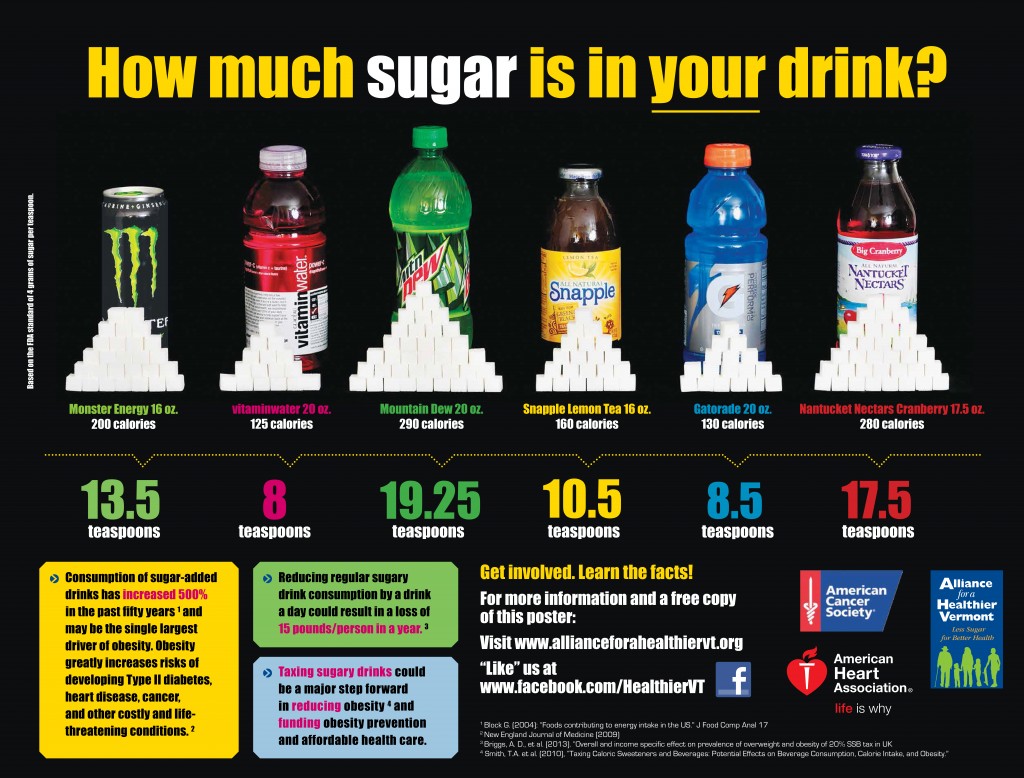 By directing some of the estimated $34.85 million raised by a sugary drinks tax to programs designed to increase access to nutritious local foods, particularly for low-income Vermonters, as proposed by the Alliance for a Healthier Vermont, the tax could be a win-win for public health and the Vermont farm economy. Examples of programs whose impact could be magnified with additional resources include:

An excise tax on sugary drinks could also benefit the dairy economy by helping make milk—a healthy alternative—more attractive to price-conscious consumers. Sugary drink prices are kept artificially low by federal subsidies on corn that goes into high fructose corn-syrup, the sweetener in most sugary drinks. In the 1990s, sugary drinks surpassed milk as the single largest source of calories in children’s diets. That has consequences beyond obesity because children need calcium and other essential nutrients milk provides.

Visit the Alliance for a Healthier Vermont website to learn more.

Anthony Iarrapino is the Director of the Alliance for a Healthier Vermont, a growing coalition of health care providers, farmers, businesses, educators, and advocates for low income populations, children, seniors, and consumers.

Rachel Johnson is the Robert L. Bickford, Jr. Green and Gold Professor of Nutrition & Professor of Pediatrics at The University of Vermont.

Tina Zuk is the Vermont Government Relations Director for the American Heart Association.