Welcome to the Spice Age 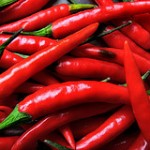 Over the past decade, the popularity of chili peppers has risen almost as quickly as the Scoville units of the hottest peppers. As we move into a globalized society, people throughout the world are discovering new exotic chili peppers, which hold a plethora of different flavors and levels of heat. Businesses are springing up to meet the various requests for extremely hot and unique peppers. Concurrently, the health benefits of chili peppers have been recognized and people are scrambling to join the next health craze.

Many people would say that the habanero or ghost pepper is the hottest pepper in the world, but a handful of pepper farmers are vying to breed the hottest pepper on earth.  One savvy farmer sells the seeds for a pepper that tops out at almost 2 million Scoville units. In comparison, the jalapeno and habanero merely reach ten thousand and 400 thousand Scoville units respectively.

While waiting for farmers to create the next scorching pepper, a select group of brave (some may say dumb) souls bide their time by competing to see who can withstand these fiery peppers. Although entire subcultures revolve around eating these exceptionally hot peppers, many people only seek the health benefits of the chemicals contained within the pepper.

The active compound that causes your eyes to water and the sweat to pour from your face is capsaicin. The chemical compound developed in chili peppers due to its ability to deter mammals. By way of example, farmers in Africa plant pepper plants around their crops in order to deter elephants from destroying their harvest and it has been much more effective than any previous attempts including electric fences, gun use and honeybees.  The reduced cost and harmless process of growing chili peppers as a defense has led some farmers to switch solely to chili peppers and they are seeing nearly double the profit. 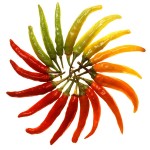 The health benefits of capsaicin have been controversial, as scientists argue whether the chemical is a carcinogen or anti-carcinogen. Studies have shown that the chemical helps destroy cancerous cells, but it has also been linked to skin cancer. The potentially dangerous relationship with skin cancer requires further research, as many additional factors have come into play with the experimentation.

Some people may be wary of all the claims of chili peppers’ health benefits, but one well-documented quality is capsaicin’s ability to treat pain. Sold as a powerful pain reliever, capsaicin cream has been found to decrease pain in cases ranging from arthritis to post-op pain.

As demand for chili peppers grows, so do farmers’  fears and uncertainty for what the future may hold. With the effects of climate change felt around the world, one frightening aspect is the impact of limited water resources. Studies have shown that chili peppers thrive and become much spicier with ample amounts of water, which means we may be eating bland habaneros in the near future.

Whether the production of chili peppers falters due to the changing climate or farmers begin to produce peppers that will melt your face, one thing is for sure: if you need some spice in your life, you can always turn to the chili pepper.

Myles Cox is a senior Environmental Studies major at UVM. He wrote this piece for an Environmental Cooking class he took in fall 2013.