Enid Wonnacott: How I became a sustainable food systems leader

Enid Wonnacott is the Executive Director of the Northeast Organic Farming Association of Vermont (NOFA-VT). She will present at UVM’s Breakthrough Leaders Program on effective leadership for sustainable food systems this June. In anticipation, we asked her to share her thoughts on leadership. 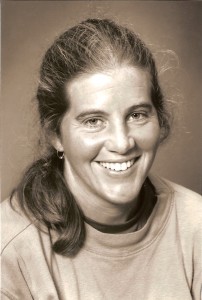 Although I have no formal training in leadership, I have 26 years of experience as the Executive Director of the NOFA-VT, a non-profit organization working to support organic farms, healthy food, and strong communities throughout Vermont.  I was recently interviewed by a group of college students on my leadership background, strategies, and goals.  It’s interesting to be in the situation of “being” a leader versus “becoming” a leader – it is not a title I necessarily trained for. Their questions made me think a lot about my leadership influences, and how I came to this position.

For me, having a powerful role model was influential in my leadership development.  My mother, Erica Wonnacott, served as the Assistant Dean of Women and then the first Dean of Students of Middlebury College for 20 years, at a time when there were few women in leadership positions at higher education institutions. My mother embodied the belief that “people matter,” and she did everything she could, every day, to meet students’ needs.

Whereas she was the voice of the students, I have felt driven, my whole life, to be the voice of the farmers.  At an early age, heavily influenced by James Herriot, I wanted to be a rural vet and I spent every summer traveling with the local large animal vet practice.  Then, recognizing that it wasn’t necessarily the medicine that I was interested in, but rather the management of the animals and the maintenance of rural farms, I was influenced by Wendell Berry and the cultural values of small farmers. I was fortunate to be awarded a Thomas Watson Fellowship to study the feasibility of alternative agricultural systems around the world in 1983-1984.  Shocked by the influence of failed American agricultural policy I witnessed, I was inspired to return to the U.S. and work towards a strong, farmer-centric, food system.  I have been doing that ever since.  So, along with having a great role model, the other critical component of effective leadership for me is having a passion and the belief that I can effect change.  I look forward to expanding on these themes at the Breakthrough Leaders Program and discussing the kinds of leaders we need right now to build strong food systems.