Check back soon for upcoming offering! 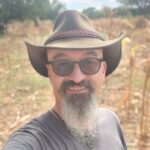 Oliver Froehling (MA 1993) is a geographer, originally from Germany, who did most of his academic work in the U.S., first in Nebraska and an unfinished Ph.D. at the University of Kentucky. He has been living and working in Oaxaca, Mexico, since 1996, doing research on indigenous autonomy and civil society in Mexico while founding and working with a number of NGOs in Oaxaca. He is currently the director of SURCO and holds an affiliation with the University of Arizona, University of Kentucky, and University of Vermont. His current work in Oaxaca involves integrating academia and social movements, focusing on the climate crisis and the appropriation of social and digital technologies by communities. He’s also part of the growing mountain bike community in Oaxaca.

Check back soon for upcoming offering!