All programs will be held at the
Montpelier Senior Activity Center (MSAC)
58 Barre Street, Montpelier

Films will be shown at the Savoy Theater, 26 Main Street in Montpelier.

Programs will not take place when the Montpelier schools are cancelled for weather. You may call 802-272-1706  to confirm.

The odd and beautiful medieval “Nottamun Town” was found after 300 years, unchanged and cherished, in Appalachia in 1917. Robinson will share the history and a performance using a wooden crankie—a pre-industrial viewing device—with her own moving pictures.

Dr. Gutman will discuss how the poet, sometimes described as a plain and simple man, became the most revolutionary, and possibly the most influential, poet of the past 250 years.

North Branch Nature Center has tagged more than 600 of these common, but elusive predators in recent years, Beckett will tell us how much has been learned about their habits and travel patterns.

Colman will share an illustrated presentation about the New Deal art and architecture programs of the 1930s with a focus on the five U.S. Post Office murals executed in Vermont.

With clips from her films, the award-winning documentary filmmaker will illustrate and talk about how telling stories and raising the voices of those who are often unheard help create dialogue around important issues.

Ryan has consulted on health issues in Bali, Haiti, Uganda and Bangladesh, attending over 1,000 births. She will share stories and explain her inclusive approach to global projects.

Now a UNESCO World Heritage site, Fallingwater is a premier example of organic architecture. Armstrong, its former curator, will discuss this renowned landmark, its designer, its owners, and its collections.

Matson, a lawyer in Stowe, will discuss how media coverage of public opinion can threaten our ability to reason collectively and adhere to the basic tenets of our government.

A drive down any VT road provides evidence of an energy “revolution.” What’s driving it? Is it practical? How does it work? Are we unique? Dr. Wolfson brings personal and professional experience in Vermont and the world beyond.

Reeve Lindbergh, daughter of author-aviators Charles and Anne Morrow Lindbergh, has written several memoirs. She will talk about her own work and that of other writers, including older adults she has taught and helped to self-publish.

The films described below will be shown at the Savoy Theater in Montpelier 12:30-2:30 p.m.

The team of Comden and Green wrote the witty scripts (and some of the lyrics) for several MGM musical classics. We’ll see three of the films this semester and examine the team’s contributions.

Comden and Green wrote the book first for the Broadway show, which was based on the ballet “Fancy Free,” and then for the 1949 film version. Frank Sinatra, Gene Kelly, and Jules Munshin play three sailors on a 24-hour leave in New York City.

One of the most entertaining films ever made is also an insightful history lesson in how silent films gave way to “talkies.” Gene Kelly, Debbie Reynolds, and Donald O’Connor head the cast.

Comden and Green wrote parts based on themselves (played by Nanette Fabray and Oscar Levant) in the story of a hoofer (Fred Astaire) trying to make a comeback on Broadway. Directed by Vincente Minelli, also starring Cyd Charisse.

For membership, complete the form on the site brochure or click on this membership form. Mail your completed form with your payment to:

(make checks payable to: The University of Vermont)

Membership in your local OLLI (Osher Lifelong Learning Institute) entitles you to attend programs at any of the other 7 OLLI sites throughout Vermont, as well as EEE-Burlington (Elder Education Enrichment). Your active OLLI membership also entitles you to the discounted member rate for the OLLI programs on the UVM campus. Simply present your membership card during the corresponding semester.

We honor the memory of Reidun Nuquist who was a leader and advocate of Central Vermont OLLI for many years. 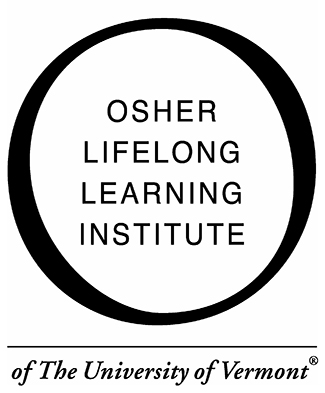 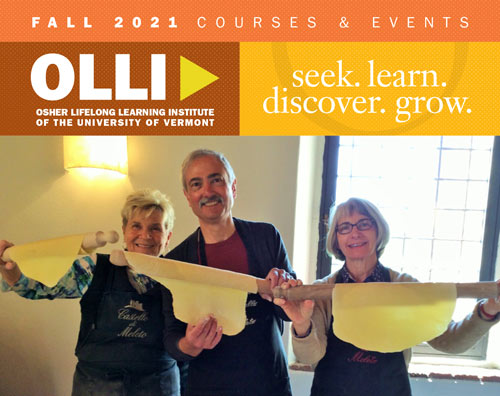