Posted by Erica Houskeeper on February 12, 2020 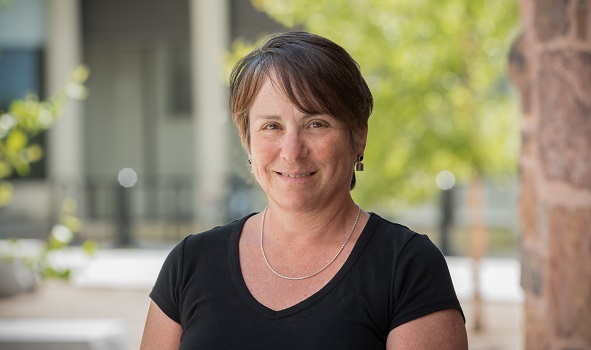 Natalie Neuert spends part of the winter on the road in search of established and up-and-coming musical acts to perform in the UVM Lane Series.

In November, she traveled to Mundial Montreal—a world music industry event, followed by trips to New York City for the Association of Performing Arts Professionals, and the Folk Alliance International Conference in New Orleans. At each location, she watched between 25-50 artists perform, trying to find just the right trios, acoustic bands, and solo artists to book for the UVM Recital Hall, a small, 300-seat acoustic space on UVM’s Redstone Campus.

“It’s like speed dating,” she says. “I will see far more acts than I can book.”

Neuert has worked for the Lane Series since 1994—starting as manager and later becoming director in 2012. Her job running the series involves fundraising and programming the Lane Series season, which includes 22 performances between September and April.

For the 2019-2020 season, the Lane Series is showcasing such artists as Mipso, Dar Williams, Zoe Keating, Sam Reider and The Human Hands, and Jeremy Denk. She’s now booking for the 2020-21 season.

“I’m looking for originality—for artists that have something that connects with the audience,” she says. “I’m looking for a mix of genres, and I’m always looking for chamber music—meaning small ensembles. I’m looking for dazzling artists of the highest caliber that you would see in famous venues around the world.”

The Evolution of the UVM Lane Series

Established in 1955, The Lane Series is part of the UVM College of Arts and Sciences. Neuert is the fourth director to lead the program in its 65-year run. Each director puts their own stamp on the series, she says.

In the Lane Series’ early days, Burlington’s Memorial Auditorium hosted performances. Neuert says booking a world-renowned act was less expensive and easier back then as it was the start of the musical touring era in the United States. Up through the 1970s, the Lane Series presented artists such as Aaron Copland, Isaac Stern, Ike and Tina Turner, the Martha Graham Dance Company, and the London Symphony Orchestra.

Changes in the music industry and increased options for audience members from the opening of the Flynn Center for Performing Arts created some challenges for the Lane Series in the 1980s.

“Prices went up, the union came in, and there was more competition,” Neuert says. “Audience preferred sitting in the refurbished Flynn and not on bleachers on a basketball court at Memorial Auditorium.”

It was Jane Ambrose—Neuert’s predecessor—who in the 1990s brought the Lane Series to campus in the UVM Recital Hall and made it primarily a classical and early (music before 1800) music program.

A Natural Love for Music

When Neuert became director, she expanded the genre of music offered at the Lane Series. She’s included world music, edgier folk music, modern music, as well as continuing the commitment to classical music in the line-up.

“We’ve been successful. Last year, we sold the season at 96 percent, which is kind of unheard of,” she says. “My question is: how do you change audiences’ perception of what you do? Just doing what you do should be the answer to that. But it’s actually not. It takes a lot of time. But I find it frustrating when someone tells me they’re ‘not a Lane person.’ Look at what we do and then you can decide. We’re presenting the same artists that play at clubs like the Iron Horse in Northampton and Higher Ground.”

Before joining the Lane Series more than 25 years ago, Neuert was the marketing manager of the Vermont Symphony Orchestra and taught in the theater department at Saint Michael’s College. While growing up near New York City, she became interested in theater and music. She played clarinet as a child and teenager and performed on stage. But she says live music is her first love.

“Access to live music and the arts is one of the things that makes us most human. I think I’m good at my job because I have a somewhat global view. I’ve had to learn what makes something special artistically,” she says. “What I have inside of me is a conviction that it’s important. I have a natural love for music and a curiosity. The words ‘curation’ and ‘curious’ probably share a common root, and the most important thing is a real honest curiosity about music outside of your natural predilection or comfort zone.”

Neuert explains that booking and building buzz around a hot bluegrass band or up-and-coming Celtic trio is far easier than selling out a contemporary classical music group. Still, she wants more people to appreciate and understand why classical music is relevant. Most of all, she wants people—including students—to show up, slow down, and listen.

“We’re asking you to listen for two hours. Turn off the phone, shut down your worries, and just listen. I guess that my dream for the Lane Series it that music continues to be relevant, and people want to experience it,” she says. “We have nothing but entertainment at our fingertips. There’s real art in our living rooms—it’s not all ‘Leave it to Beaver’ anymore, it’s all right there so you never have to leave. So, what does our business do to stay important to people? I think it’s helping people realize they want to part of the collective and community experience of live music.”