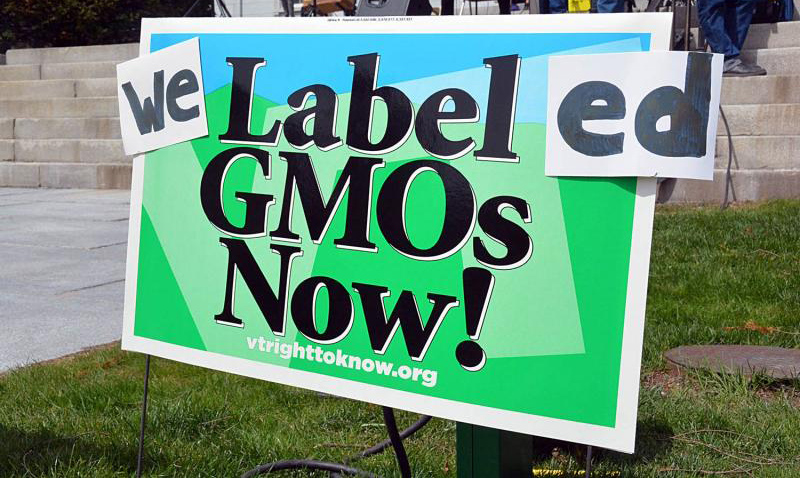 On May 8, 2014, Governor Shumlin signed into law H.112, An Act Relating to the Labeling of Food Produced with Genetic Engineering. This is the first law in the United States to require foods that contain genetically engineered (GE) ingredients be labeled. It will also restrict the terms “natural,” “all natural,” and other similar terms for being used on food products that contain GE ingredients.

In food marketing, many terms are used and few of them are regulated. As was recently posted on the UVM Food Feed blog, only a couple of terms have legal definitions, and continue to lead to confusion amongst consumers. Consumers are less and less aware of all of the practices that are used in agricultural production, so it is important that terms gain legal definition so that they actually have meaning. 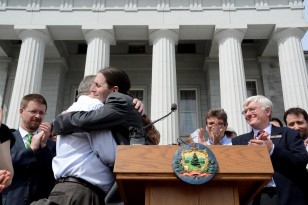 Sen. David Zuckerman embraces Senate President John Campbell before the signing of the GMO labeling bill in May. (Photos by Angela Evancie, VPR)

When it goes into effect in 2016, the GMO food labeling law will enable a consumer to look at the packaging of a food product for human consumption and determine if genetic engineering was used in the process of producing that product.

A Battle to Defend GMO Labels

What does the future hold? That remains to be seen. On June 13, the Grocery Manufacturers’ Association filed suit to overturn the law. This court battle will likely be protracted with both sides potentially appealing it as far as the U.S. Supreme Court. Historically, the State lost one case regarding labeling (for milk containing rBST/BGH) and won one case regarding labeling (products containing mercury).

There are smart lawyers who are giving opinions on each side of the equation as to whether we will likely win or lose the case. It probably will come down to issues of state rights, first amendment issues, as well as interstate commerce issues.

In passing this law, we followed a regularly used format to create a “special fund” in the Vermont Attorney General’s office that will be used to establish the rules for the law as well as to defend the law. It allows the fund to be filled using state funds, other governmental funds (federal or local), or private gifts. It is estimated that it will cost the state approximately $1 to $1.5 million to defend the law and if we lose, we could be liable for the plaintiff’s costs, which could raise the bill to $5 to $8 million.

People across the country have already pledged to help Vermont through the Food Fight Fund, as they recognize that Vermont is ready to go into an expensive legal battle in order to lead the GMO labeling movement.

David Zuckerman is a Vermont State Senator and runs Full Moon Farm in Hinesburg with his wife, Rachel Nevitt.

This piece was originally posted on the UVM Food Feed blog.