Trekking Across the Classroom – Traveling to Nepal 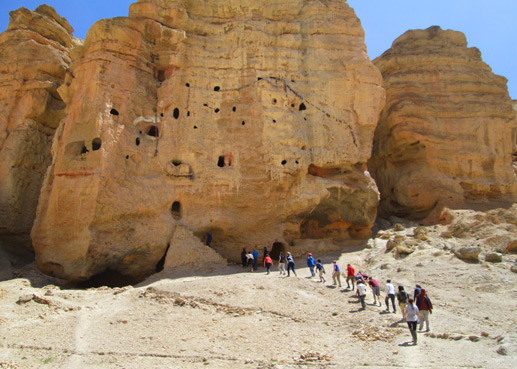 It only happens once. For those with a passion for Nepal, nothing compares to that first encounter with the majesty and the madness, the peace and the pollution, absorbing a world that contains both the heavily populated city of Kathmandu and the hidden Kingdom of Mustang. As a former Peace Corps volunteer told 14 study-abroad students during their orientation at the end of May, “I’m so jealous that you get to go to Nepal for the first time.”

Sydney Lister, a junior environmental science major from Cincinnati, confirms the range of reactions. Responding to the first of daily journal-writing prompts, she records her experience of the drive from the airport to the hotel in Kathmandu: “After overcoming my initial fear of pinning a biker between our bus and another car or running over a cow, I saw so much fly by outside the window that I was at once dizzy and transfixed by it all.”

Lister and her classmates taking “Nepal: Changing Communities — the Forbidden Kingdom of Mustang” (a course that could be registered as history, anthropology or geography) were there to explore how issues of globalization, environmental change and cultural preservation have reached into a place so remote it was closed to outsiders until 1992, and is still an autonomous region that’s become one of the last places, since the Chinese took control of Tibet, that retains a vibrant Tibetan Buddhist culture.

Getting in — and out — after two additional flights, required two weeks of trekking that alternated between ascending and descending trails with both desolate terrain and commanding views of Annapurna, Nilgiri and other grand peaks, taking them along the Gandaki River trail and later cliff side, high above a gorge. The group visited a school and a sacred pilgrimage site, farms and monasteries and one of the last medieval cities with an intact and functional wall, all part of an ambitious itinerary to see and start to understand the complex political, financial, religious and cultural debates surrounding Mustang as both China and the West exert influence.

For Lister, the greatest reward was learning from villagers and monks and the native guides as they chatted around the campsite in the evenings, finding a disarming friendliness and easy, warm connection with the people she met. And she was impressed witnessing their intuitive adaptability to problem solve — such as sharing limited water access — in a way she doesn’t encounter in the U.S. “I didn’t expect to fall in love with it,” Lister says. “I’ve traveled a good amount, but I’ve never been impacted this much.”

Soaking in this vicarious energy, while watching the intellectual pivot students make as they absorb what it means to learn from rather than about a place, is what trip leaders Abby McGowan, associate professor of history, and her teaching assistant Lisa Conlon ’07, find continually compelling. Or, as Conlon puts it, it’s the fun of “watching Nepal blow their minds. I love seeing people, instead of having their visions fulfilled, be totally changed by the experience. When you leave with more things you think you know than new questions,” she says, “you definitely didn’t do it right.”

With the combined and complementary expertise of McGowan and Conlon, together with their joy in sharing this place with engaged students, it’s unlikely anyone would get it “wrong,” returning home with more arrogance than humility.

Conlon, whose mother is Nepalese, knows the country, having spent half her life there, trekking the Himalayas from toddlerhood and now running Above the Clouds, the adventure tour company her father founded. She met McGowan, an expert in modern South Asian history, in a material culture class at UVM and was inspired to change her major from political science to history, taking all of McGowan’s classes.

“It was the first time I learned about a place that I was deeply invested in in a way in which I respected,” Conlon says. “It totally changed my opinion about the way that history could be learned or lived.”

Four years ago she convinced her former professor to team up to teach a study-abroad class. It wasn’t a hard sell. With Conlon skilled at covering tour logistics, McGowan is free to focus on helping students make academic connections. The two also share a close and spirited friendship — they’re rarely together, it seems, without an abundance of laughter — which they believe serves as a strong model when days on the trail are rough.

“I think it’s hard for the students not to enjoy it when we’re clearly having a great time,” McGowan says. “That’s what’s so teachable about it — you can have the best day even when it’s been tough socially or physically. It inspires them to search past their immediate reaction and see that this could be the day they most look back on with pride or fond memories.”

So on one hand McGowan and Conlon are helping students see that solutions or perspectives that seemed self-evident in the classroom quickly get complicated once they’re on the ground. If a place is declared a heritage site to preserve a dying culture, for instance, how does that impact its inhabitants, who turn out to be real people who might enjoy electricity and plumbing? Who decides?

But students come home changed in ways they never anticipated, too. One thing Conlon sees is the impact of having to walk in and out. “It slows them down, gives them a chance to process, and I think helps them understand what it is to live at that pace.” And they discover their own self-reliance and adaptability. “Even when you don’t have access to water, a flush toilet or power,” Conlon adds, “you see people can still be friends and that we have more in common than we have not in common. I love their willingness and openness to it.”

For McGowan, the effect on students when they watch her interact with people in poverty-ridden cities, in situations that riddle them with discomfort over their wealth as Americans, is incredibly powerful. It’s a lesson she suspects may be more critical than any facts she can teach them about trade routes through the Himalayas or the establishment of kingdoms.

“It’s about how you move in the world in an ethical way that acknowledges disparities and provides access to real human conditions,” McGowan says. “It allows this connection for me with students that is amazing because I love traveling in South Asia, and I love teaching.

“The breadth of information they see impacting their lives is so obvious and so exciting for students, nothing like learning for a test,” she continues. “It’s the most pure teaching I’ve ever done.”

Lee Ann Cox is a staff writer for UVM Communications.

*This piece was originally published on UVM Today.