UVM Is: David Carlson Creates a Sense of Community for Student Veterans 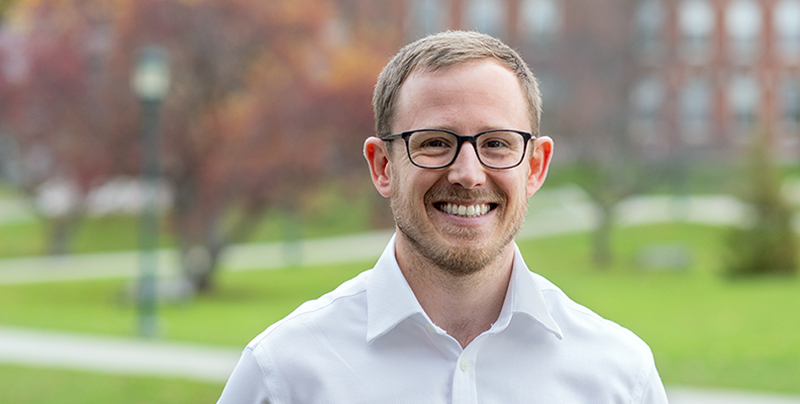 Connecting with military veterans on campus is the best part of David Carlson’s day.

As coordinator of UVM Student Veteran Services, Carlson helps military vets make a smooth transition to the University and adjust to college life.

Carlson, a UVM alumnus and military veteran, knows all too well what it’s like to go from the military to a college campus.

After earning his diploma at Burlington High School, he enlisted in the U.S. Marine Corps, serving in Iraq and later as a strategic reserve on a ship in the Mediterranean. He returned home four years later, attended Community College of Vermont for one year, and then enrolled at UVM.

“When I was in the military, my day was scheduled down to the minute. I was told who report to and which uniform to wear. You’re constantly in this close-knit, tribal society sharing and doing everything together,” he says. “When you return home and go to college, you’re going into an independent situation. For me, it was a 180-degree transition to go from Marine to UVM.”

Carlson earned his degree in political science from UVM in 2011 and went on to lead the UVM Student Veterans Services office when it opened in 2013.

His job as coordinator includes helping students understand VA benefits, register for classes, and adapt to a new environment. Carlson achieves this by setting up regular meetings with students and hosting office hours.

Not only does his office handle all the benefits information for veterans, but Carlson also sets up a robust communications process to keep students informed about add/drop dates, registration timelines, and benefit payments. It also gives Carlson a chance to check in with students about how they’re doing academically and emotionally.

“It gives us an opportunity to have a setting to talk about things. We discuss how they’re doing with their professors and their classmates, and figuring out how to do work on their own,” he says. “In the military, 70 percent of your learning is in a classroom and 30 percent is on your own. It’s the exact opposite in college.”

Connection and Community for Student Veterans

UVM student Stephanie Wobby, president of the UVM Student Veterans Organization, frequently consults with Carlson on how to make the college experience better for student veterans. She describes Carlson as understanding, accessible, and hands-on.

“David fills many roles: he’s a mentor, a coordinator, an advisor, a mediator, and a friend,” Wobby says.

One of Carlson’s goals is to continue to build connections and community among student veterans. Last year, Carlson co-facilitated with UVM Professor John Franklin on offering Classics courses designed for student veterans. In one of the classes, students read and discussed the works of Homer, and how those ancient stories resonate with today’s troops.

“Homer’s Odyssey is at the core of western civilization culture and the human experience—it’s about being at war and coming home,” Carlson says. “It was this rich conversation about what homecoming meant—for those with combat experience and those without combat experience. Linking to a historical experience is incredibly grounding. It helps us build community for students to find their particular fit on campus.”

Commander Michelle Caver graduated from UVM last May and previously served as the president of the UVM Student Veterans Organization. She participated in the veterans-only class last year and described the exploration of Homer’s work illuminating and relatable.

“David knew the value of bringing veterans together to make sense of military service and remind each other about our abilities to thrive in the civilian world,” she says. “As a result, I became a better student because I found a community on campus while exploring a timeless tale that resonates with many veterans who served in a combat environment.”

When someone who is just getting out of the military comes to Carlson’s office with uncertainty about what the future holds, he rolls up his sleeves and is eager help.