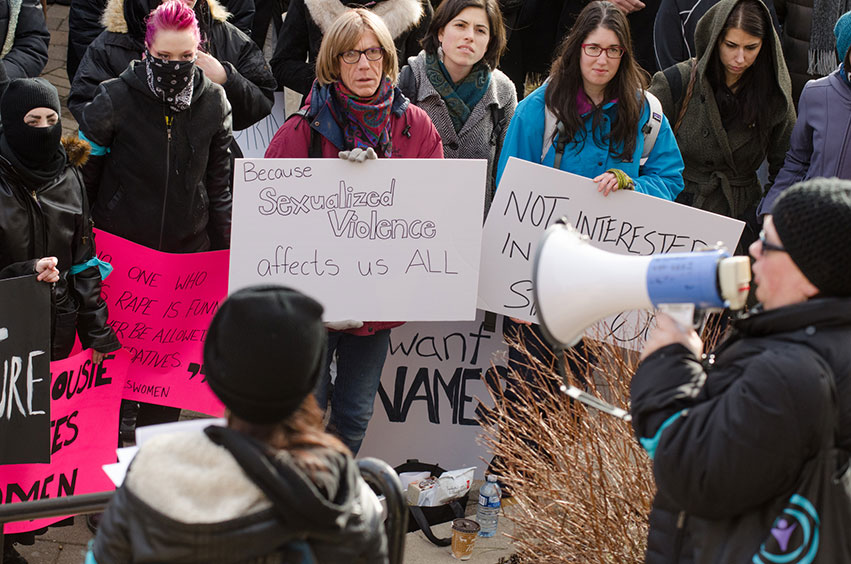 According to research funded by the Justice Department, only 3 to 18 percent of sexual assaults lead to a conviction. Challenges in proving a case may be due to a lack of evidence, an inability to identify the perpetrator, attempts to undermine the credibility of the alleged victim, trauma, and many other factors. According to RAINN (Rape, Abuse & Incest National Network), perpetrators of sexual violence are less likely to go to jail or prison than other criminals.

Under Title IX of the Education Amendments of 1972, if a college or university receives federal funding, it may be held legally responsible if it is aware of and ignores instances of sexual harassment and assault within its programs or activities. Title IX establishes a lesser burden of proof for institutional investigations and adjudications of sexual assault than for criminal investigations and stipulates that a school must address the “hostile environment” caused by an assault or face penalties and fines.

Not unsurprisingly, Title IX has often proven controversial, with opponents claiming that its lower evidentiary standards can result in unjust disciplinary actions against the accused (according to the discretion of the institution) and, on the flip side, does not treat sexual assault with the same gravity and seriousness that the justice system does.

Dr. Bill Stackman, associate vice president for student services at the University of Notre Dame, will be presenting a session on “Title IX and Restorative Justice” at this year’s UVM Legal Issues in Higher Education Conference. We spoke to him about the efforts he’s made in student outreach and intervention and the challenges colleges and universities face in tackling sexual and gender-based violence and protecting the rights of students on campus.

When you heard of a sexual assault on Notre Dame’s campus in 2010, you surveyed every student. What inspired you to take that measure? What were some of the most important pieces of information the university took away from the data your office collected?

We have conducted three campus climate surveys and three series of focus group studies in the past eight years with the same purpose—learning more about our students so we can develop the most effective educational and intervention strategies to combat gender-based violence. In addition to broad misconceptions and misinformation, we continue to see a need for further educating our students on the topic of consent. In addition, students do not fully understand our processes and the options for moving forward with a report of sexual misconduct.

How do you work to cultivate a culture where Title IX violations are recognized and reported? Do you feel the #metoo movement has helped raise awareness on campus?

We witnessed a dramatic increase in the number of reported cases of sexual misconduct a few years prior to the #metoo movement. Some of the increase was due to the Violence Against Women Act amendments in 2014 that required colleges and universities to report dating violence, stalking, and domestic violence beyond the Cleary Act mandates, adopt student discipline procedures, and adopt certain institutional policies to address and prevent campus sexual violence.

However, much of the increase, as reported in our studies, was due to other factors including institutional trust and commitment, a broader understanding of one’s role as a mandatory reporter, and the increase in the number of training and educational programs. While the #metoo movement has had a dramatic impact nationally, I personally believe that the educational and awareness efforts on campuses across the country had already begun to shift a culture.

Sexual assault is notoriously underreported and extremely difficult to prove in the criminal justice system. According to its proponents, evidentiary standards are lower under Title IX, making it easier for victims to receive the help they need on campus. However, the punishments for those found guilty through the school are much less severe—often a year-long suspension for the perpetrator. Doesn’t this leave open the possibility of the victim feeling discriminated against when his or her abuser returns to school?

I can only speak for Notre Dame where almost all of our cases in which a respondent was responsible for rape have resulted in permanent removal from the institution. However, there have been cases in which complainants hoped for an outcome of expulsion and feel challenged as they navigate a campus where the respondent remains a student. In those situations, we continue to care for them and offer the appropriate resources and accommodations.

It is. But first and foremost, it is most critical to focus on caring for and doing right by all the students involved in a case of sexual misconduct—from beginning to end, which includes adhering to federal guidelines and following our regularly reviewed policies and procedures. If those things all happen correctly, the university stands a strong chance of being protected as well.

You’re a big proponent of inclusion, outreach, and building support systems for students. What does that actually look like on your campus?

The University of Notre Dame continually works to educate the campus community regarding the issue of sexual assault through preventive programming and providing resources to help members of our community care for themselves and one another. We strive to ensure that every member of the Notre Dame community is able to define and identify sexual assault; is aware of the resources available on campus; and is empowered to speak up and help others. We offer ongoing educational training and outreach, GreeNDot—a violence prevention strategy, and annual assessments of our student body.

The university currently enrolls more than 12,000 undergraduate, graduate, and professional students. Every student has a Care and Wellness Consultant, depending on his or her college or school. Through a coordinated program of consultation, advocacy, resources, and engagement, a Care and Wellness Consultant provides early intervention in a principled way to support members of our community who are experiencing stressful or difficult situations. There is no concern or problem too small or insignificant. Last year we saw close to 1,000 different students for a variety of personal and academic reasons.

Finally, we provide a number of resources to those who have experienced sexual assault or interpersonal violence. We also provide a resource coordinator, who is a trained trauma informed staff member, to support every complainant and respondent named in a case of alleged sexual misconduct.

The UVM Legal Issues in Higher Education Conference will be held from October 15-17 at the Davis Center in Burlington.

Learn more and register for the conference.