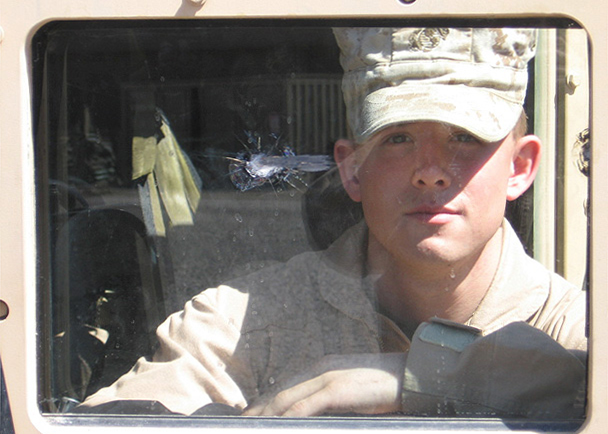 David Carlson, UVM’s coordinator of student veterans services, knows something about dramatic transitions. In 2004, he went from earning his diploma at Burlington High School to enlisting in the U.S. Marine Corps, then from boot camp to Camp Fallujah, Iraq, in a matter of several months. A second deployment, in Ramadi, and a third, as a reserve on a ship in the Mediterranean, would follow.

When Carlson completed his military duty, returned home, and decided to continue his education, he knew he’d be coming to the classroom with very different life experience than most of his fellow undergrads at UVM. At age twenty-four, with a youthful face, Carlson really wouldn’t stand out much. Still he says, he did what he could to blend in even more. “I grew a beard and wore a Mountain Hardware jacket,” he notes.

As coordinator of student veteran services, a new job for Carlson and a new role at UVM with the outset of this academic year, he takes a central role in helping his fellow military vets make a smooth transition into the university and negotiate the new environment once they’re enrolled. “For the veterans who have done two or three enlistments and then come back to begin college when they’re age 30 or 35, that’s another challenge,” he says. “They’ve got a family at home, and here they are in Calc I with 30 freshmen. That is going to be more difficult.”

Chris Lucier, UVM vice president for enrollment management, notes that the initiative to better serve military veterans’ higher education needs came from several places — the President’s Commission, Student Government Association, the Veteran’s Assistance Committee, and leaders in state government. “Given the benefits of the Post-9/11 GI Bill and the number of veterans leaving service, we felt it not only was a moral imperative to support the men and women who had fought for our country and ensure their success, but also a component of creating a diverse community,” Lucier says.

He adds that the new UVM staff position has been designed to do more than help vets navigate both government and university bureaucracy. “David’s charge is to manage the administration, but also to educate the campus about student veterans, to proactively link veterans with on- and off-campus support, to increase the enrollment of veterans and to be an advocate for student veterans on campus,” Lucier says.

UVM’s efforts earned the university a spot in the top ten in a U.S. News rankings list of veteran-friendly schools. Carlson notes that recognition is partly due to participation in the Yellow Ribbon Program, an initiative through which the difference between in-state and out-of-state tuition is covered, in a 50/50 split, by a student’s school and the Veterans Administration. “That’s UVM saying, in no uncertain terms, in dollars and cents, that we are trying to support veterans,” Carlson says. (For in-state students, the Post-9/11 GI Bill provides full in-state tuition and fees, plus a housing allowance.)

“Dave has a lot on his plate,” says UVM senior history major J.T. Batchelder, a military veteran who came to the university after two years at Community College of Vermont. While Batchelder is frank that trying to make the worlds of veterans benefits and university financial offices mesh has been sometimes frustrating, he says having someone on board as veterans services coordinator is helping matters. “He’s someone I can talk to rather than bouncing from office to office all over campus. Dave has made my life much easier.”

Batchelder enlisted with the U.S. Marines between his junior and senior years at Burlington High School and was off to basic training just days after his graduation in 2006. The terrorist attacks of 9/11 were a key motivator for him. “I felt like this was my time to do something,” he says. “I’d gotten so much already from the country, and I was going to give something back.”

Batchelder says college barely crossed his mind in high school. He figured he would join his father in the building trades after his military service, but the Post-9/11 GI Bill suddenly opened the door to higher education for him. Batchelder and fellow student veterans note the decidedly different life experience they bring to college than most undergrads.

Collier Harmon, who is simultaneously a medic in the Army Reserve and a UVM nursing student, says, “The possibility to be called up to deploy is constant and not something many students can relate to.” She is also frank about some frustrations with the system, particularly the difficulty in transferring military credits to UVM as academic credits, but says she feels the situation is getting better. “Overall, there are many areas in which UVM can be improved for student veterans, but the hardworking individuals set on making these changes have been met with a largely receptive administration, and together we are making strides to serve those who have served,” she says.

For Ryan Britch, a junior in sociology from Franklin, Vermont, the college funding of the GI Bill was a motivator to enlist, a path to an education he otherwise could not afford. Britch says when he enlisted in the Vermont Army National Guard at age seventeen he was also driven by a certain sense of adventure and the desire to serve. “I feel very fortunate to be an American,” he says, “and I wanted to give back in some fashion.”

Britch says he and two fellow members of his unit discussed coming back to Vermont and attending UVM during their time in Afghanistan. All three are now students at the university. “The transition back into school was initially challenging,” Britch says. He found a defining moment in difficulty when a professor made a disparaging comment about the U.S. military, expressing the opinion that soldiers are solely individuals on the fringe of society, the unemployed and uneducated duped into putting their lives on the line for oil interests. Britch approached the professor after class, spoke of his own experience and asked her to recant the statement. She declined.

Though Britch and fellow veterans say that one experience contrasts with typically supportive and respectful treatment they receive from faculty and students, he took it as an additional level of motivation to prove himself through his academic work.

“I definitely feel more motivated, more organized, more focused than I was when I was eighteen. That could be age; it could be maturity; but I also believe it is because of things I learned while I was in the Army.” And, with a wisdom and perspective born of that experience, he adds, “Three years ago I was in a foxhole on the Afghan/Pakistan border, freezing cold. Now I’m in a university classroom sitting next to my peers. I feel very fortunate to be here. I’m ecstatic to be here.”

Thomas Weaver is a staff writer for UVM Communications. This piece was originally published on UVM Today.