Finding Job Satisfaction Through a Career in Food Systems 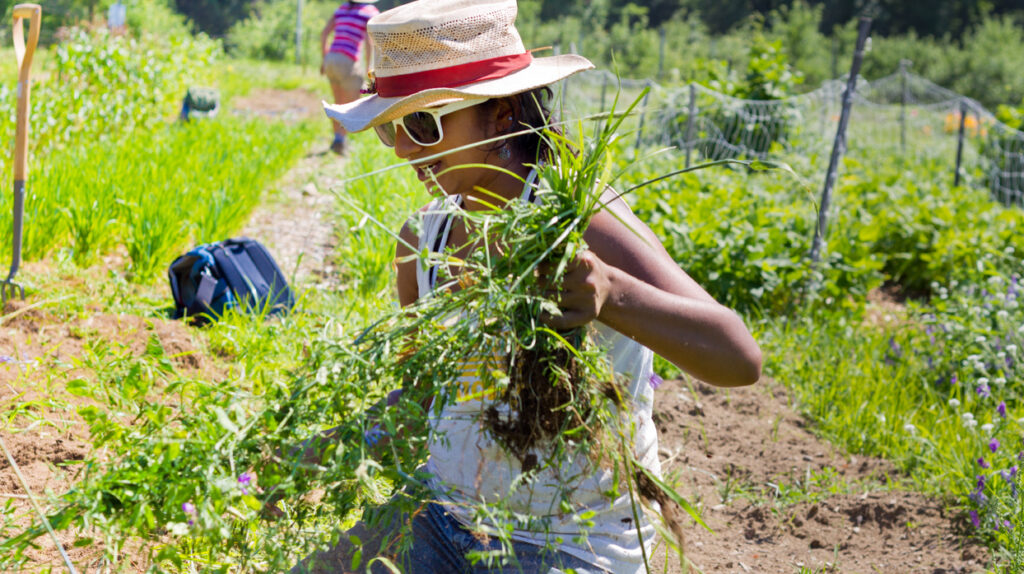 Rachel Hong, 43, was a lawyer in a “small litigation boutique,” she says, in Seattle. In November of 2013, she quit her well-paying job, sold her house, bought an Airstream camper, packed up her two dogs — and drove to Vermont. Now, on a hot July afternoon, she wipes a piece of duct tape over the leaves of a squash plant in a garden at the UVM Horticulture Research and Education Center in South Burlington. The tape is bumpy with the eggs of cucumber beetles.

“They’re really gross,” says her workmate, Anya Dudek, 22, who is harvesting beautiful bundles of cilantro in the next row over. “It’s not at all glamorous.”

But neither Hong nor Dudek, nor the other 22 students in the UVM Farmer Training Program are spending six months learning the science and art of organic farming because they thought it would be glamorous. They knew it would be a lot of hard work.

“I read so much these days about how sitting is killing us, and I was doing a lot of sitting,” Hong explains. “And there was a huge amount of stress — and that’s the other thing that’s killing us. I had long hours and low job satisfaction. I felt like I was just another fungible cog in this huge corporate wheel.”

Hong had no agricultural experience before starting this program. “I always cared about food,” she says, “and its connection to the wheels of social justice. Our food system is being taken over by forces beyond our sight and out of our control. I think it’s scary — but this program is exciting.”

UVM started a horticultural research station here in 1952, on land that used to be an old dairy farm. Known to many as, simply, the “Hort Farm,” the 97 acres has been evolving its mission over the decades. “There’s still lots of research that happens here: grapes, apples, trees,” explains director Terry Bradshaw ’97 G ’11. But the center has expanded and formalized its educational offerings — including its Farmer Training Program, which began in 2011, as well as other hands-on agriculture courses. Beginning this year, as a joint effort of UVM’s College of Agriculture and Life Sciences and Continuing and Distance Education, five acres at the Horticulture Center fly under the flag of a new name: Catamount Educational Farm.

Summertime classes in sustainable food systems management; soil fertility and climate change; composting ecology; and orchard and vineyard management draw a mixture of undergraduates from UVM and other colleges, as well as the full-time Farmer Training students. “I’ve been here in Vermont for four years,” Anya Dudeck says, “and I’m pretty set on starting my own farm.”

Rachel Hong moves down the row with her duct tape, while Dudek wraps another bunch of cilantro with a rubber band and places it in a blue plastic crate. “We’ll meet up at the picnic tables for Farm Walk in ten minutes,” their instructor, Laura Williams, the manager of the Catamount Farm, tells them.

Students maintain their own small plots, but they also spend time walking and looking together at other parts of the farm, asking questions. “This is their classroom,” Williams says. “Doing is the only real way to learn how to master some of these skills. The goal of the program is to fuse the theory with the hands-on.” On Thursdays, the students have rotations to nearby certified-organic farms: Bread and Butter Farm, Intervale Community Farm and Half Pint Farm. “The students are with us for a whole growing season,” Williams says, “so they go from planting potatoes to harvesting potatoes to selling potatoes.”

Or — on a fine Tuesday afternoon in September, at a well-stocked farm stand on the path between Bailey-Howe Library and the Davis Center — selling apples, eggplant, cucumbers, watermelon, tomatillos, garlic, ground cherries, mesclun and unbelievably hot paper-lantern peppers. At least one customer didn’t believe farm assistant Andrew Bahrenburg , 28, when he warned that the peppers were hot and took a big munch. Customer service in the form of a soothing apple is part of the job. 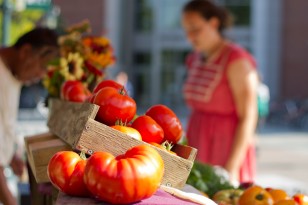 Running an on-campus farm stand, just outside the Davis Center, is part of the curriculum in the UVM Farmer Training Program.

Bahrenburg, an alum of Macalaster College, graduated from the UVM program last year, with a certificate in sustainable farming, and now is employed at Catamount Farm, helping with the teaching and work. “I did this program as a career change. I was on Capitol Hill,’” he says, working as a legislative aide to Minnesota congresswoman Betty McCollum. “I wanted to get farm experience, thinking I would go into sustainable ag policy.” But he likes the farm life so much he’s going to stay in it. (At first, however, he wasn’t so sure, as he writes in this blog post.) “Organic farming is intellectually very strenuous. We replace pesticides with knowledge of the land. And it also engages you at a physical level,” he says. “Now I found a job that satisfies both mind and body. That’s what I love about farming.”

Today Bahrenburg is staffing the farm stand with another student from this year’s cohort: Rudy Echavaria, 59, a retired bus driver from Los Angeles. Echaviaria left his Filipino community — “there are 1.4 million Filipinos in LA,” he says — and came to Vermont for the training. “There are thirty-two Filipinos here,” he says, laughing. When the program ends on Oct. 30, he aims to start his own farm back in California. “I searched around on the internet about how to be a farmer and do it the right way — and found this program,” he says. He’d like to lease land at first, work for himself and make a market selling vegetables and eggs from his farm to the many Filipino people he knows at home. He has reason to be optimistic: of last year’s graduates from the program, all but one or two have found work in farm or food related fields.

“Everybody likes tomatoes, eggplants and okra,” Echavaria says, smiling and reaching his arms across a shelf full of unbearably orange heirloom tomatoes, “but at home we eat lots of choys — like bok choy. Whatever it is, I’m learning to do this the right way, organically.”

Joshua Brown is a staff writer at University Communications.

Joshua E. Brown is a staff writer at University Communications.

Joshua E. Brown is a staff writer at University Communications.