Why Innovation Matters for Leaders in Today’s Economy 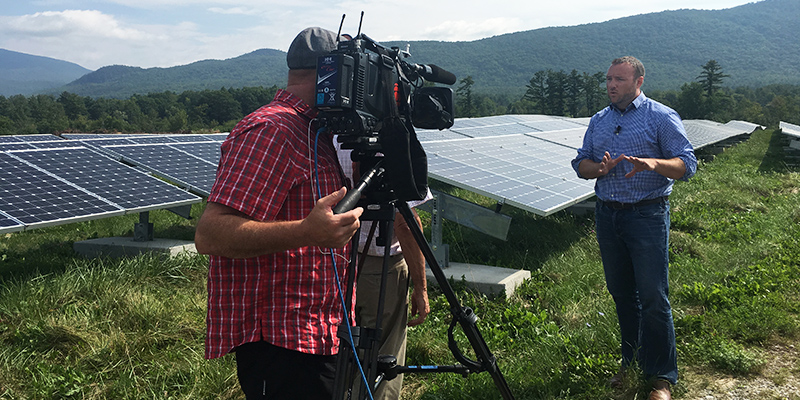 If you’re looking for a company that’s a model of innovation and social responsibility, look no further than Green Mountain Power.

Green Mountain Power (GMP) is recognized as a national leader in renewable energy, demonstrating how electricity can be generated, stored, and distributed in ways that are clean, cost-effective, and more resilient to climate change and outages.

We talked to Josh Castonguay, Vice President, Chief Innovation Officer of GMP, about why innovation for leaders and companies is more important than ever.

How has innovation helped GMP go from a relatively small utility to becoming a national leader in innovation?

Like many things, it starts with leadership and a willingness to try and move quickly in the innovation space.  When you’re talking about innovation and energy, you can’t take six years to develop something.

For example, back in 2006 or so, solar power wasn’t as big as it is today. I was always interested in solar, and I mentioned to CEO Mary Powell an idea about building a solar project. She said, “Let’s do it.” So we built a solar array in Berlin. We already owned the land and it was in an industrial part of town, so it only took about 10 months from start to finish. Once we set our mind to it, we did it.

Do you think a company’s culture plays a part in being innovative?

It’s totally about the culture. You can have the best laid strategy on the planet, but if your company or organization has a dysfunctional or toxic culture, you won’t get anywhere.

We’re so lucky to have Mary Powell and a great team here that is creative. When we start pushing big ideas and acting on them, they gain a lot of attention.

What are some effective ways professionals can identify innovative opportunities in their company?

I think it’s more about listening day to day. One of my favorite ideas came from a team member who is a field designer in southern Vermont. We were talking about an old distribution line that went through Emerald Lake State Park in East Dorset, an area that she is familiar with. The park had rest room facilities served by an electric line stretching a half-mile through swamps, marshes, and heavily forested terrain that needed to be replaced.

She suggested we take the line down and put in solar battery. That’s just what we did.  The park went off-grid in the summer of 2017. It saved GMP customers the cost of maintaining the power line, it provides the power needed, and it keeps line workers safer from having to repair the old lines feeding the park.

It sounds like that was a brilliant and simple solution to something that could have been more complicated.

Exactly. This is an example of listening to your team members and to those pain points they might not even know they’re conveying. I love the saying, “Think big, start small, and scale fast.”  I always tell people I’ll take creativity over extreme technical aptitude any day.

What are the skills needed to disrupt the business-as-usual approach?

Personally, I think you have to be a persuader, and you have to be passionate. It’s already hard to push these ideas if they’re going to disrupt business, so you have to be confident and passionate about what your idea is. If you’re self-aware enough to know you don’t have skills to persuade others, team up with someone who does.

The hardest part about taking a new approach is sticking with your idea because you’re always going to get push back—some constructive and some not. It’s all about perseverance and working with team members who can build on each other’s ideas.

Can you talk about some of your own professional growth in the company, and how you approach opportunities for innovation?

I started as engineer at GMP in 2003. I was always interested in pushing the envelope on anything. One of the greatest pieces of advice I ever got was when I was starting college at the University of Maine. My uncle said, “Don’t expect to walk out of college and be an expert in anything. College teaches you how to learn.”

It’s true. What has been way more important, I’ve learned, is knowing how to find the information I need to pursue something. When I started at GMP, I knew some engineering and I introduced ideas, and I just kept reading and digging in. My approach is about not taking no for an answer and just pushing through.

Why is innovation so important in today’s economy?

From the energy space, it’s very clear to everybody that we have a serious issue with the planet. We have to innovate because, from an energy and climate standpoint, we have no choice.

Even if you’re not in the energy field, there’s a lot about innovation that can be tied to the climate. We have to find new ways to do things because the status quo is not going cut it.