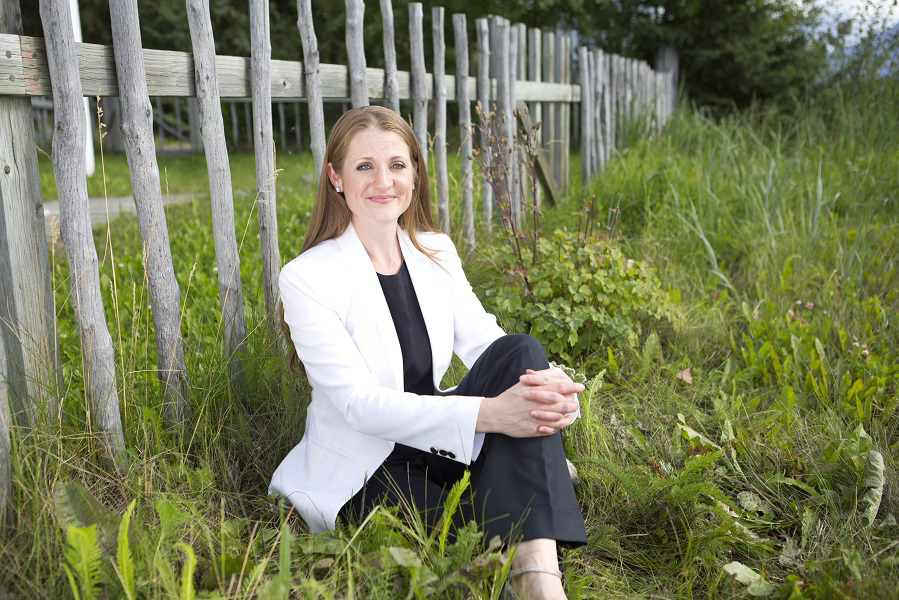 As President Obama visits Alaska this week to address climate change, we talked to Anchorage dietitian Grace Schumacher, a student in UVM’s online Breakthrough Leaders Professional Certificate in Sustainable Food Systems, about the challenges in food system development in the 49th state.

Schumacher works in nutrition education at an Anchorage hospital, helping patients find ways to eat for general health or specific medical conditions. Now that she has completed the UVM Breakthrough Leaders program, she’s eager to participate in dialog to create, guide, and implement a more responsible food atmosphere in Alaska.

She’s hoping to take her career into food policies and food system development, which she says is an enormous task in Alaska as a result of climatic, cultural, fiscal, and transportation difficulties.

Can you talk about some of the food system challenges in Alaska related to climate change and transportation?

Alaskans are deeply connected to subsistence foods rather than farmed foods. Many Alaskans travel long distances to fish, hunt, or gather wild foods. In more rural areas, where game and wild foods are literally in your backyard, hunting and gathering is a normal activity. Here are some challenges we face in Alaska:

Climate: Our growing season is relatively short, just a few months in most areas, so growing food in Alaska is itself a challenge. However, temperature and weather patterns have also changed and we are seeing waves of warmer temperatures year round which, of course, impacts what can be grown. The weather changes also impact wild plants and animals, which are migrating farther north, so people are collecting wild foods that are fairly new to some regions. Additionally, storage of foods in colder areas north of Anchorage is also a concern, since foods typically wintered in cold cellars may not stay cold due to the melting permafrost. On a separate but similar topic, there has been concern from subsistence communities that animals are not as healthy as they once were. Some diseases have been reported, which causes distrust of wild game as a food source, driving native peoples to choose more store-bought foods. 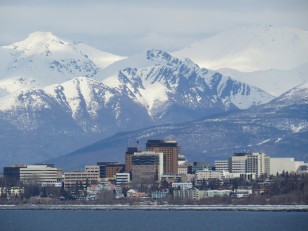 Fiscal/Transportation: There has been a push to subsidize locally grown foods from the few mid-sized farms. Alaska Farm-to-School and Fish-to-School and Farm-to-Table are examples. Regardless of the USDA grants for farm and agriculture start-ups, it’s expensive to start a farming business and purchase equipment or transport foods to be processed, and it’s expensive to distribute foods. Farming in Alaska is not as typical as in many of the lower-48 states because the costs associated with growing, processing, and distributing foods grown during our short summer is so high. Therefore, most foods are imported.

For many in Alaska, where housing costs are also high, eating healthfully is considered too expensive, and the local foods are simply out of reach. The costs associated with hunting and fishing is too great for much of the population. As an Alaska Native cultural issue, the cost of eating traditional foods may be prohibitive and as more people move to urbanized areas there is concern over loss of traditional practices.

What’s the conventional way of thinking in Anchorage about local food? Do you see progress being made?

Local food, defined as produced in Alaska, has been branded by the Alaska Grown campaign, which is everywhere: grocery stores, farmers’ markets, restaurant menus, and school meals. As a marketing campaign, Alaska Grown has been widely accepted by Alaskans, but, again, the purchase price of locally grown produce is high. There seems to be a connection for some to local foods, perhaps in a smaller, health-conscious population, and some businesses cater to an Alaska Grown niche at a premium and flourish. Definitely the talk around the agricultural community in the state is bent toward more local food production. Interesting farming techniques are being used to meet needs of local communities, such as the use of hydroponics in the cold interior regions.

Local foods are foods that have been farmed in Alaska, but not necessarily foods native to Alaska. There is currently a lot of buzz concerning brand new state laws and infrastructure surrounding legalization of customary trade and use of traditional subsistence foods in commercial food service since federal legalization of these foods came as part of the Farm Bill reform in 2014.

You earned your Bachelor of Science in Nutrition from the University of Alaska, Anchorage, in 2014. Have you always wanted to work in nutrition?

My family moved to Alaska from the Midwest in 1994, and I spent most of my childhood in Washington state. I graduated high school in 1997 and began taking classes at the University of Alaska, Anchorage (UAA), and worked toward a degree in Russian language. After I got married and had my first child in 2000, I was a stay-at-home mom. We moved north of Anchorage to the Matanuska-Susitna borough, where cooking was my hobby for the next decade. I learned a great deal of technique from imitating Food Network chefs. When I thought about going back to school, food and nutrition seemed like a natural calling. I didn’t know then how much I would love working with people to influence the way they interact with food. 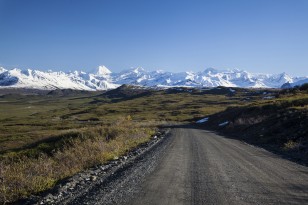 It wasn’t until one of my classes introduced food politics that I became aware of food issues in my area. I wrote to my senator to continue to work toward passage of legislation for the people of the Southeastern Alaska Community of Hoonah to be able to once again collect gull eggs in their traditional way, a practice which had been denied to them for decades since the state took control of fish and game licensing. Tracking that legislation — which did eventually pass — was thrilling, and I knew that I wanted to be more involved in advocating for sustainable, traditional food practices.

I earned my bachelor’s degree in dietetics in 2014 and completed the dietetic internship through UAA at various Alaskan sites in 2015, learning cultural relevance in each practice area. The field of dietetics is diverse and exciting, and the work is never done.

You work at North Star Behavioral Hospital. What nutrition issues do you typically address in your job?

UHS North Star is a residential hospital for children and teens, who come from all over the state for treatment. There are clinical standards of care that my position manages, such as malnutrition or certain metabolic or disease states. Some genetic diseases have a propensity toward cognitive or behavioral difficulty, so it’s not uncommon for me to see patients with a genetic condition.

However, many of the patients that I see have had adverse childhood events that contribute to behavioral issues; neglect and abuse may have been factors, sometimes an effect of the widespread domestic violence and alcoholism in this state. Most of these children haven’t had nutrition or health education before their admission to the hospital, so my job of making therapeutic education groups is new and fun.

As with other levels of nutrition education, my major focus is raising awareness of how food choices impact health. I also answer to specific medical consultations that may arise to address metabolic disturbances caused by medications, such as those that cause elevated blood glucose or cholesterol levels. My position as a dietitian is also responsible for evaluating concerns related to food intolerance, allergies, modified diet orders, or disordered eating behaviors and coordinating needs with the food service production.

What were some of the most important things you learned in the UVM Breakthrough Leaders Program? 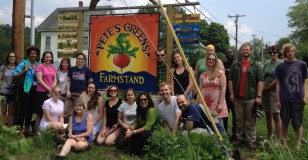 The program made ideas that I had previous exposure to more cohesive and immediate. Food system ideas were delivered as an interactive dialogue, which meant that the work was accessible and applicable to me as a class participant, not just for researchers or doctorate-level professionals. I graduated knowing that I needed to do more than attend conferences and symposiums. I had enough information to do become a leader in food system change. The fact that we have individual responsibility to our planet and to the people working in the global food system is reason to be cooperative in these efforts, and the Breakthrough Leaders program showed the multitude of partnerships that could form to solve specific food system issues.

What brought you to UVM?

I came to UVM to solidify my stance on what “sustainable agriculture” meant, but since leadership development was also a key focus, I graduated with a clear idea of how to capitalize on my strengths as a leader and where my place in food system development in my community could be. What began as an introduction to leadership development has left me continuing to ruminate about my results from the leadership assessment and what motivates me to be effective leader.

I am more aware of factors that motivate me to participate in leadership roles, namely connectedness and sharing of information and ideas. This self-awareness has become pervasive in everything I do. I am happier when I choose to practice these skills, and it’s exciting to know that my talents are useful to the issues related to food system development that I’m passionate about.

What was your impression of Vermont, UVM, and the food systems work being done here?

My first impression from searching on the web was intrigue over the farming focus, which just isn’t a typical part of an Alaskan experience. Vermonters have a connection to the land in a similar way that Alaskan’s do; it is what sustains us. How it’s done in Alaska needs to change, and I saw that Vermont and UVM could unlock some of that mystery for me. 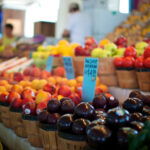 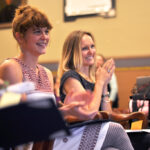 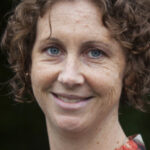 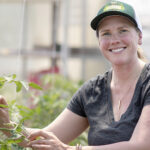 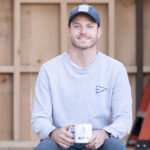 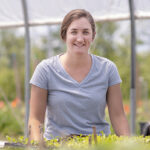