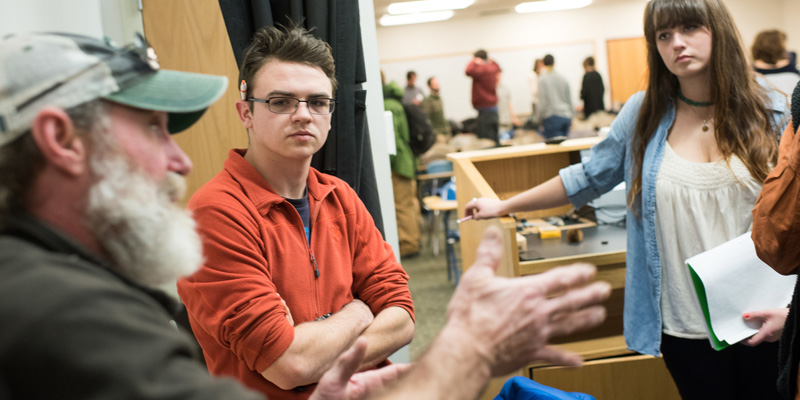 “Any rock climbers out there?”

The question hung in the air like a climber about to summit a challenging rock face. Then, bashfully, a few hands at the back of the class crept up.

The query, posed by Chris Mattrick of the Green Mountain National Forest, was aimed at the 64 seniors in NR 206, “Environmental Problem-Solving and Impact Assessment,” and had a serious purpose behind the offhand delivery.

Mattrick was looking for a team of students to help him develop a management plan for regulating recreational rock climbing in the national forest, a potentially risky sport becoming increasingly popular there.

Mattrick was one of 33 community partners—ringed around the perimeter of the Living/Learning Center classroom—who took turns describing to students one Tuesday in early February a dazzling array of projects that they needed help with, which would also give students a chance to put into practice the lessons they’d learned during their college careers and give them a standout experience for their resumes.

The projects ranged from tracking bobcats in Hinesburg for the Nature Conservancy to mapping invasive species at Ethan Allen Homestead for the Winooski Valley Park District to developing maps and marketing materials for a Green Infrastructure Bike Tour in Burlington for the Green Infrastructure Collaborative.

NR 206 is a capstone course all students in all majors in the Rubenstein School of Environment and Natural Resources take in their senior year to culminate their studies.

Students work closely with partners all semester, meeting with them formally three times as their projects progress. They also have weekly classroom sessions, where they talk about “the skills of success and problem solving, group dynamics and leadership communication,” says the course’s instructor, Zac Ispa-Landa, who has taught the course for five years.

NR 206 is a service-learning course—one of 25 offered by the Rubenstein School this academic year—and epitomizes the dynamics of the teaching approach, says Ispa-Landa: that of an experience mutually beneficial to both students and community partners.

In addition to tackling an important project for the partner, “students are doing real, authentic work and making a change,” Ispa-Landa says. “They also have an environment in the classroom where they’re engaging in critical reflection on their experience in the field. We create the conditions and the resources for them to do critical reflection, to think deeper about their experience and really make it educational.”

It may be a capstone course, but Ispa-Landa likes to use a different figure-of-speech when describing it.

“I see it more as a stepping stone,” he says. “It’s really about preparing students for stepping out into the world post-college and actually putting into practice what they’ve learned in 17 years of formal education and four years of specialized education in their field.”

“It’s not at all unusual for students to get their first job after college through a connection they made with this community project.”

For the students in the class, the effect of all the presentations, which took more than hour to go through, was almost dizzying.

“It seemed like there were three dozen things that were interesting,” says Farrah Ashe, a natural resources major. “The problem is picking which one I want to go with. I’m really excited. They’re really going to mentor you at the beginning, and then this is solidly your own work, so you could say, ‘Wow, I did this.’”

-Jeffrey Wakefield is a staff writer for UVM Communications. This story was originally published on UVM Today.