“It’s absolutely essential to keep advancing biofuels because biofuels can play a wider role in reduction of fossil fuels and help reduce all the issues that have come up because of fossil fuels, including fluctuating oil prices, peak oil scenario, and the reality that fossil fuels may not be here forever, as well as the environmental and health impacts of fossil fuels,” says Anju Dahiya, Ph.D., biofuels instructor and director of the University of Vermont’s Bioenergy Program and co-founder and president of GSR Solutions, a Burlington company focused on renewable energy solutions. She also is the editor of the recently published, comprehensive textbook, Bioenergy: Biomass to Biofuels.

Estimates vary on when the world’s oil reserves will run out. Public and political attention to the issue waxes and wanes, often due to fluctuating gas prices or the emerging new technologies, such as fracking, that boost oil reserves. That leads some doubters to question the reality of peak oil.

Yet even the oil and gas industry recognizes oil as a finite resource. BP (British Petroleum) reports the world has enough oil to last a little over 50 years. That’s not a lot of time, especially when widespread use of more sustainable fuels, such as biofuels, could be years away.

Scientists, however, remain committed to renewable bioenergy solutions. And Dahiya, with one foot in academia and another in industry, is constantly looking for ways to connect the two worlds, ensuring bioenergy research can be more quickly applied for practical use.

To do that, she began teaching a course on “Biomass to Biofuels” at UVM in 2009, drawing college students, farmers, entrepreneurs, bank loan officers, engineers, teachers, and others who wanted to know more about developing renewable energy from biological matter.

“How I designed this course is to bring together the biofuels-focused businesses in Vermont and farms in Vermont and to motivate students to build their own businesses or however they would like to contribute to bioenergy areas,” Dahiya says.

She is working with UVM Continuing and Distance Education to add an online version of the course, potentially reaching even more people outside Vermont. She plans to maintain the same curriculum and offer “virtual” field trips, lectures from experts and researchers, and demonstrations of biofuels equipment. But she hopes to revamp the service-learning component, allowing students to complete hands-on projects in their hometowns.

Through such projects, students apply what they are learning to real life. One student, for example, developed a proposal for a wood pellet cooperative so low-income people could access and use this renewable source of heating fuel. Other students partnered with Avatar Energy of South Burlington on a scalable anaerobic digester to turn food waste into fuel, among other projects.

But until recently, something was missing from the course: a textbook. There was no single work that provided an overview of the current research and discussions regarding biofuels. 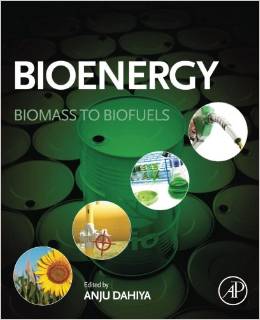 “Students were asking: Is there a book for your course?” Dahiya recalls. “Each topic in the course involved multiple books, and I figured out there was a need for this kind of book, and that is how the book was born.”

Over two years, she created and edited the 670-page “Bioenergy: Biomass to Biofuels,” published by Elsevier Inc. It brings together education and research from the leading bioenergy experts from universities and extension services, government laboratories, and nonprofit groups across the country.

“It fills a need not only for current students, but should also serve as a basic resource for anyone interested in an organized introduction to the language, feedstocks, technologies, and products in the bio-based renewable energy world, including transportation fuels,” Ivancic writes in the book’s foreword. “We need a text that discusses the challenges of transitioning away from fossil fuel, not as barriers to change, but as issues worthy of serious study, research, and reflection. … This is that text.”

Dahiya first developed an interest in biofuels during discussions she had with other research scientists and students at the Chesapeake Biological Laboratory’s Center for Environmental and Estuarine Studies at the University of Maryland, from 2001 to 2002.

In Maryland and then in Vermont, she wondered: How could scientists and industries better capture that green slime and turn it into fuel?

Using algae, she concluded, would avoid the “food versus fuel” debate that arises when crops such as corn are diverted from the world’s food supply into fuel production.

“I thought the best possible and feasible solution would be any fuel that we could capture from waste. It solves two problems at the same time: treating waste and then generating fuel from it,” Dahiya says. “One of the best solutions I had when it came to biofuels was advanced biofuels from non-food algae and capturing wastewater nitrogen and phosphorus found in pollution runoff, and that got me interested in biofuels and bioprocessing at the front end or back end of life cycles.”

Research into renewable energy sources, including algae, is not new. The University of California, Berkley, was using algae for wastewater treatment in the 1950s, Dahiya says. The U.S. Department of Energy already has poured $25 million over two decades into a project to identify algae strains and to produce oil from it.

Also, while sunflowers and jatropha would divert acres for fuel instead of food, algae “is more advanced in that there is a synergy with waste treatment,” she says. “Waste is not going away. Human society is generating huge amounts of waste. Algal oil gives us the chance to utilize all these resources.”

Still, she cautions, “there is not one silver bullet, one single biofuel, that can solve all the issues around bioenergy. It’s a synergy of all these biofuel options that could take us away from our dependence on fossil fuels. Wherever there are energy needs, bioenergy can be used.”

A successful bioenergy system, she says, would mean “we are producing surplus biofuels compared to the amount of energy that goes into producing that fuel.”

Through her work with GSR Solutions, Dahiya is identifying those energy needs and solutions. Currently, she is looking for cost-effective, environmentally sound ways to turn algal oil from waste – whether it’s manure from Vermont dairy farms or byproducts from local beer breweries – into biofuels to heat homes or power vehicles, jets and equipment.

Her research has been supported by the U.S. Department of Agriculture, Department of Energy, Environmental Protection Agency and NASA, as well as the National Science Foundation, Vermont Sustainable Jobs Fund, and EPSCoR. She is a frequent speaker at conferences, programs, and workshops, and her work has received extensive media coverage.

“Dahiya’s enterprise is the first to produce oil by using farm waste as food for the oil-producing algae,” Vermont Public Radio noted. “This is an important first step,” Todd Campbell, energy advisor to the U.S. secretary of agriculture, told VPR. “And what we’re interested in at USDA, is proving out the concept, taking small steps forward to optimizing systems.”

Dahiya is a grant recipient and research collaborator with the Vermont Bioenergy Initiative, which connects diversified agriculture and local renewable energy production for on-farm and community use by supporting research, technical assistance, and infrastructure development in emerging areas of bioenergy including algae production for biofuels and wastewater management.

With funding from the U.S. Department of Energy secured by U.S. Sen. Patrick Leahy, the Vermont Bioenergy Initiative has supported a number of Dahiya’s algae to biofuel research projects. Her advanced biofuel research and development is determining the most viable and cost-effective methods for accessing algae’s commercial potential to produce clean renewable energy while treating wastewater and supplying nutrient-rich feeds and food.

What is the future of bioenergy?

“As we move forward, we have to tackle issues such as ethanol,” Dahiya says. “How do we efficiently break down non-food organic material without putting too much energy into it to produce fuel? Those types of advances would take care of the ethanol issue, so fuel is not coming from food but from food waste and even organic solid waste.”

In addition, she says, co-locating facilities such as biodiesel and ethanol production and “exploring complementary processes, so that multiple products are produced from the same processes, making them cost-effective, would move us forward very quickly.”

Even more important, Dahiya says, would be “all the different energy solutions – solar, wind and bioenergy – working together in a complementary way. Right now, they are working in separate areas. I visualize synergistic energy solutions that use all these different pieces.”