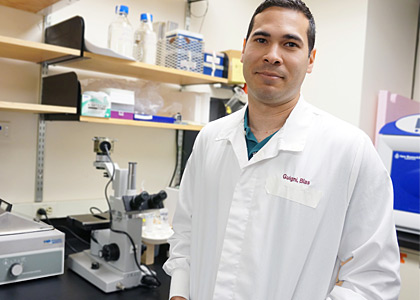 University of Vermont graduate student Blas Guigni learned a lot about trauma surgery and orthopaedics during a tour of duty in Iraq from 2007 to 2008, his second serving overseas. As the manager of an acute care and musculoskeletal clinic at the US Army base in Tikrit, he helped to coordinate care for wounded soldiers seeking treatment for everything from muscle strains caused by wearing heavy body armor to devastating wounds inflicted by IEDs (improvised explosive devices) and high-velocity rifles.

Since surgeons assigned to the clinic rotated through roughly every 90 days, he played a key role in the clinic’s operation, helping to provide life-saving treatment himself as well as acquainting new staff with the available resources and the sometimes hectic day-to-day pace at the clinic.

“I became very fluent in orthopaedics,” he says, adding that some of the surgeons he worked with likened his level of experience to that of a fifth-year surgical resident, thanks to his hands-on training and the medical science program he completed at the US Army Academy of Health Sciences. And that wasn’t his first tour of duty.

During Operation Enduring Freedom, he was deployed in one of the first units into Afghanistan in 2003, at a time when infrastructure was minimal and danger was high. One month in, his convoy was hit by RPGs (rocket propelled grenades) that caused several casualties. He suffered serious injuries and returned to the U.S. to recuperate, with plans to return to service when he was able.

Guigni’s experience serving overseas — his own and that of fellow soldiers suffering from serious injuries and undergoing rehabilitation — helped to shape his future as a PhD student studying cellular, molecular, and biomedical sciences at UVM. Working in the lab of UVM Associate Professor of Medicine Michael Toth, PhD, he’s researching the mechanisms underlying cancer cachexia, a metabolic condition characterized by profound muscle loss, weakness and fatigue.

“No one understands what causes it to happen,” Guigni says, adding that about 50 percent of cancer patients suffer from cachexia, which can be life-threatening. Using both human subjects and a murine cell culture model, he’s growing live muscle cells in the lab, and applying a chemotherapeutic agent to determine its effect on muscle at the molecular level. If his work can tease apart how chemotherapy affects the fundamental building blocks of muscle tissue, and how this interaction may cause the muscle to atrophy, that’s one step closer to pinpointing potential treatments or ways to prevent cachexia from happening in the first place.

There are few labs in the United States doing research at the level of a single muscle fiber, so Guigni says he’s grateful to be working with Toth, whose work is breaking new ground when it comes to understanding muscle function as it relates to disuse, chronic disease, and aging. The goal is to understand the molecular function of muscle in the service of developing more effective preventative and rehabilitative interventions.

Guigni came to the PhD program at UVM with some experience researching the human body’s function at its most basic level. A graduate of Connecticut-based Quinnipiac University in addition to the US Army Academy of Health Sciences, he spent three years as a research assistant at Yale School of Medicine, studying insulin resistance in muscle and liver tissue in the lab of Dr. Gerald Shulmans.

This work exposed him to state-of-the-art research methods, and gave him a foundation of knowledge about the mitochondria, a key cellular component considered the “powerhouse” of the cell. His background has translated seamlessly to his current work, which requires familiarity with cellular structure and an understanding of a variety of research methods, from the bench to the bedside.

Now in the third year of his PhD program, Guigni serves as a non-commissioned officer in the US Army Reserves, a role that includes travel to locations in Vermont, New Hampshire and Massachusetts to train new soldiers in his unit. As a veteran with close to 20 years of experience — he joined the Army at 17 years old straight out of high school — Guigni hopes to use his experience and career in research to improve the care available to patients.

“I am excited about the collaborative future of basic science and bedside medicine,” says Guigni. “With this ‘bench-to-bedside’ approach I will translate basic scientific findings into therapeutic interventions for patients, increasing the understanding of an important disease processes.”