Gerontology Certificate Focuses on the Health and Personal Growth of Elders 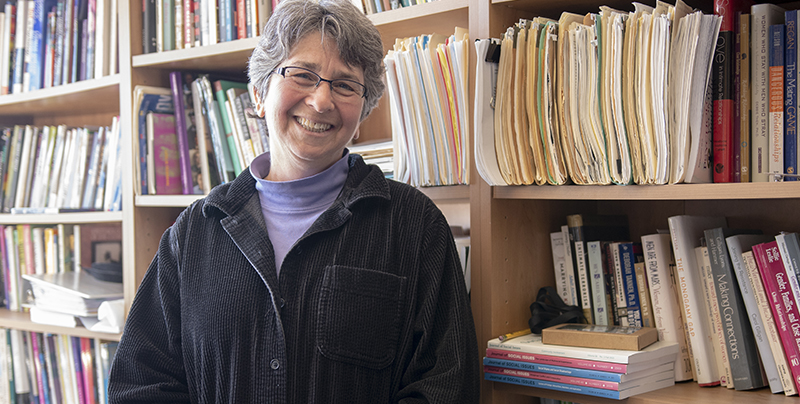 In a little over a decade, an important demographic turning point will happen in the United States.

By 2030, all baby boomers will be older than age 65, and one in every five residents will be retirement age, according to the U.S. Census Bureau’s 2017 National Population Projections. The 2030s are projected to be a transformative decade for the nation’s population, which is expected to grow at a slower pace and age considerably.

By all accounts, people are living longer today than in past generations, and they’re in better health than ever before. Still, myths and stereotypes about elders persist. Those include false assumptions that seniors are unable to learn new things, develop intellectually and have ample financial resources.

Associate Professor Jackie Weinstock is working to change those misconceptions.  Weinstock is the program director for the new UVM Certificate in Gerontology, a 15-credit program designed for community members who want to better understand late adulthood and our aging society and for professionals preparing to serve the elderly population and support positive aging.

“We need to be preparing students to work with elders who have a better understanding of what is possible in old age,” says Weinstock. “It’s not just about how to care for elders, but also how to create a context for continued growth and development in old age.”

Changing Attitudes Toward an Aging Population

Weinstock is also the co-author of a new book, What’s Next? The Continuing Journey of the Wake Robin Life Care Community with Lynne Bond (Onion River Press, 2019).  The book examines the Shelburne-based assisted living facility’s successful strategies to help residents realize their potential for continuing growth in old age.

In Vermont and beyond, the population is aging. The demand for professionals trained in gerontology far exceeds the number of professionals prepared to work in this field, Weinstock says. There is also demand among adults, including elders, to better understand and prepare for their own and their loved ones’ late adulthood years.

Through a series of three required courses and two electives, students in the UVM gerontology certificate program will gain foundational knowledge of biological, psychological, and societal aging, learn about direct practice and ethical issues common to working with elders, and consider the effectiveness of social service programs, public policies, resources, and settings designed to serve elders.

“How do we change younger peoples’ attitudes so that they challenge their own ageism and be more open to connecting with people in old age?” Weinstock says. “I think there’s a growing need for that developmental perspective.”

She explains that one of the developmental challenges facing older people involves a change in how to think about and select one’s activities and experiences.

“There’s a model to successful aging called ‘Selective Optimization with Compensation,’ which was created by Paul and Margret Baltes. As your abilities change and the context of your life changes, you have to decide what is most important to you and how to preserve your energy for those most important things,” she says. This is the “selective” part of the model. “The optimization part involves figuring out as best as possible ways to engage these preferred activities and experiences, and the compensation part refers to ways you may need to adapt what you do and how you do it. Maybe you can’t do the activities or have the experiences in the same way now, but you can find a way to get your needs met.”

For example, she says, maybe you love tennis, but you start to experience back pain after playing a few sets. You realize that you may not be able to continue to play tennis but you value the physical, social and competitive aspects of it so much that you don’t want to give that up. So you pick up pickleball, which involves less running and is played on a smaller court (that’s compensation), and you decide to take some lessons to play well (that’s optimization). You still have the key aspects that you love but you’ve compensated for your changing body.

“’Selective Optimization with Compensation’ is a long way of saying that late adulthood is when you have to acknowledge and adapt to changes,” she says. “So, how can we as professionals help folks think about the time they have remaining and what they want to with that time?” And then support them to do those things.

Weinstock hopes students who participate in the certificate program will gain a deeper understanding of aging and what’s possible even in their own lives as they age.

“I’m in midlife myself, and I’m closely watching how elders are treated, how they are portrayed, and those stereotypes,” she says. “As a life span development psychologist, I know we can do so much better if we understand late-life development. We want to understand our elders as whole beings. We want to meet them where they are at now without denying them their past.”

Register for the UVM Certificate in Gerontology