Amy Trubek Examines What Cooking Means in the Modern Age

Posted by Erica Houskeeper on December 5, 2017 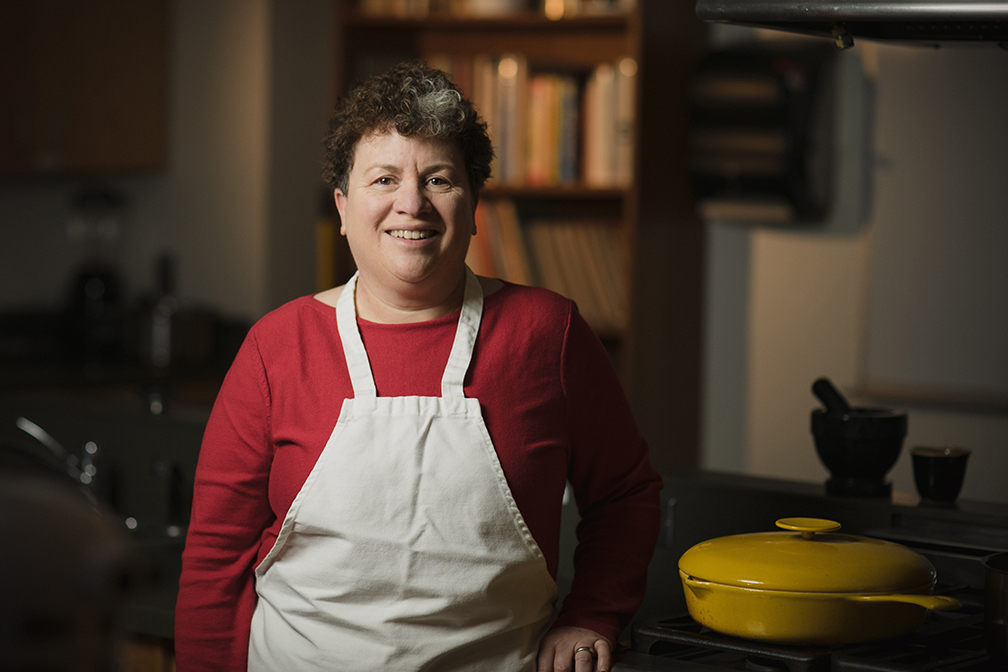 My feelings about cooking are complicated. Sometimes I feel joy when I cook, and other times it’s more like shame. After reading “Making Modern Meals: How Americans Cook Today” by UVM Associate Professor of Nutrition and Food Science Amy Trubek, PhD, I was at once relieved and alarmed that I’m hardly alone.

I was raised in an Irish-Catholic household, the youngest of seven children. Every night, my mother cooked a protein, starch, and vegetable for dinner. Meals usually consisted of chicken, venison, liver or trout, along with potatoes or rice and green beans or peas.

For some reason, my mother and I never cooked together. We would bake cakes once in a while, but cooking was never part of our relationship. She never asked me to help, and I guess I wasn’t interested enough to take the initiative and learn from her in the kitchen.

My lack of knowledge and indifference eventually turned into intimidation, which made me avoid cooking altogether in my 20s and early 30s. It wasn’t until I was married and had a child that I faced my fear. Once I became a mother, I figured it was time to buy a skillet and figure out a way to regularly cook for my family.

What Does Cooking Mean to People in the 21st Century?

To research “Making Modern Meals: How Americans Cook Today” (University of California Press, 2017), she visited homes and professional kitchens to interview 50 people, including parents, working professionals, bakers, and chefs about their cooking strategies, habits, and challenges.

“I found myself very moved by how much food matters to people, and that they want to do the right thing as best they can,” Trubek said in an interview last week. “Everybody wants to nurture themselves and others. It’s not that they don’t want to, it’s just that it’s difficult.”

Trubek also examines the social pressures and domestic ideals tied to cooking, especially for women. The chore of cooking has become so entangled with social obligations and moral values, and providing good food defined as “healthy” has become equated with being a good mother.

Perhaps I’m a good mother when I cook locally sourced beef chili in my slow cooker and a bad one when I serve up a box of macaroni and cheese for dinner. That’s often how it feels. It’s one of the complexities that Trubek set out to learn more about in “Making Modern Meals.”

In the Cooking Is a Chore chapter, Trubek writes, “It can be argued that ambivalence toward making everyday meals has run wide and deep in the case of American women because they are laboring with such a heavy symbolic load on their backs. Even though women can now vote, wear pants, and work outside the home, cooking as ‘the regular or daily light work of a household or farm’ remains part of a women’s role as the center of family life.”

She acknowledges that it’s hard not to feel a certain amount of pressure and emotion in the kitchen. With the rise of celebrity chefs, glossy food photos on Instagram, and Tasty Tuesday videos on YouTube, food has become increasingly glamourous while cooking remains a virtuous task. Still, it’s hard to believe that in 2017, cooking dinner continues to crackle with such a cultural and moral charge.

Unfortunately, Trubek doesn’t see that changing anytime soon. “We’re social animals, and social comparison is a way we define ourselves,” she says. “But do you need to feel in anyway burdened by it? The answer is no.”

When it comes to gender roles, she does see a potential shift on the horizon “If one of the big changes we’re seeing is that cooking is not an everyday chore, but rather an expression of self or care for the family, then the question of gender is really compressing. It will be interesting in 50 years to see whether anyone views cooking to be associated with a particular gender.”

In or Out: Where We Eat

Cooking has clearly been transformed over the past several decades. We spend more money on food prepared outside the home, spend less time cooking, eat fewer meals at home, and have more diet-related disease issues. Trubek agrees that one culprit is the demands of modern life, such as working full-time while raising children.  We also have more options for enjoying food outside the home than our grandparents or great-grandparents did 75 or 100 years ago.

Lack of time and stage of life do make a difference in a person’s decision to cook or eat out, Trubek says. Research has also found that being of a more advanced age had a significant, positive effect on time spent preparing food, most likely because these people are retired or have less time-consuming jobs.

For me, a working parent, it’s hard enough to find time to prepare meals, let alone teach my six-year-old daughter much about cooking.  But I also don’t want my daughter to feel as lost in the kitchen as I once did. Since she was three years old, my daughter has helped my husband and I make things like blueberry pancakes, lasagna, and chicken pot pie.  How should I continue to teach her to cook when I don’t have decades of wisdom to pass down?

“I think you can make cooking with her somehow necessary and meaningful, but it doesn’t need to have a huge amount of emotional weight,” Trubek says. “When it comes to food and cooking—especially domestic cooking—emotions have become a big part of it. I think that is just part of who we are. But I think you can also just look at it matter-of-factly with your daughter as in, ‘We’re cooking, this is something we do, and this is what is happening today.’”

Ultimately, Trubek hopes that a conversation about why cooking matters will help address other issues like obesity and the rising consumption of processed food.

“The thing I find fascinating is that cooking has been a profoundly important piece of the human experience. We think about cooking a lot, but we don’t verbalize our thoughts. However, when you talk about it, you realize how complex cooking really is.” she says. “By having a cultural conversation about cooking and food, it can lead to better teaching, better communication, and better policies about food.”