Getting a Taste of Hop Farming in Vermont

Posted by Erica Houskeeper on November 18, 2014 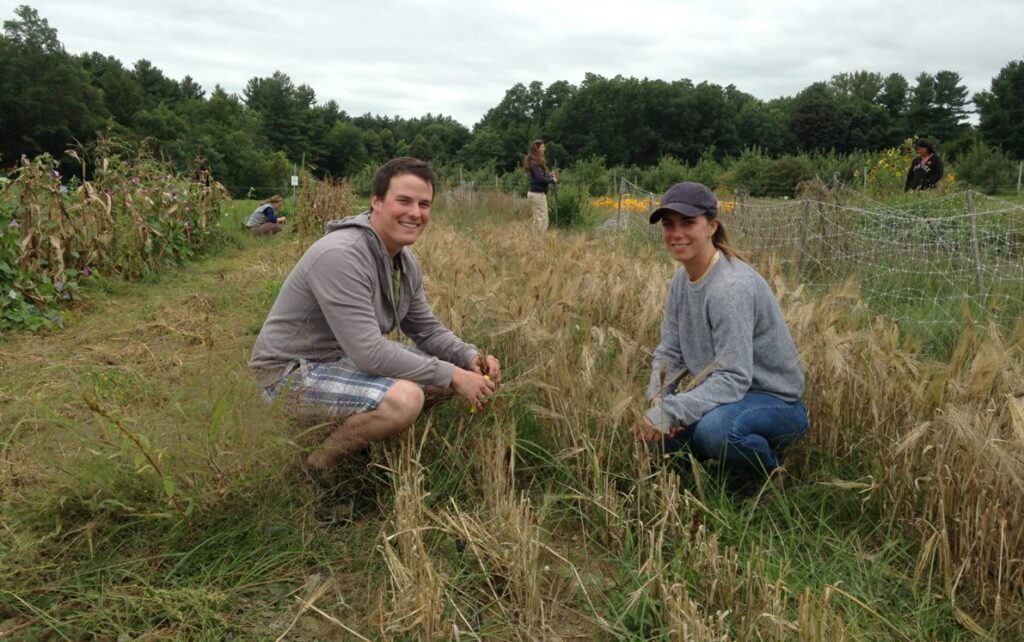 Vermont is better known for its beer than its hops.

With more than 30 breweries in Vermont, including The Alchemist, Hill Farmstead, and Lawson’s Finest Liquids, Vermont has the highest number of craft breweries per capita in the United States. Over the past five years, Vermont has become a wildly popular destination for beer aficionados.

But local hops are a different story. Vermont has only about a dozen small, commercial hop farms as most hop production occurs in the Pacific Northwest.

Jessica Heinrich, who graduated from the UVM Farmer Training Program in October, sees an opportunity to change that.

Heinrich joined UVM’s Farmer Training Program because of her general interest in sustainable agriculture. But it was only after arriving in Burlington with her partner last spring and experiencing Vermont’s local food and beverage culture that she decided to pursue hop farming. Her partner, Chris Whaley, who is an experienced homebrewer and Certified Cicerone® working in the tasting room at Fiddlehead Brewery in Shelburne, also encouraged Heinrich to explore hop farming further.

“After being exposed to the local farming and craft beverage culture — coupled with conversations with Chris and reading books on growing ingredients for home brewing — that our personal passions collided and the dream of creating a business with both farming and brewing components started to come together,” Heinrich says. “There is this huge market opportunity, especially in Vermont. Everyone wants local products, and it can happen for hop farming as long as producers can find disease-resistant varieties that grow well in this climate and can be grown profitably.”

Hop Farming Production in the Northeast

According to the latest U.S. Agriculture Census, there were 166 hop farms in 2012 compared to 68 in 2007. As craft beers now make up about 8 percent of U.S. sales by volume, growers have begun to adapt what varieties they are producing to meet the shift in demand toward more flavorful and aromatic hops, which characterize most of the craft brews on the market today.

Hop production was common throughout the Northeast in the 1800s. A number of factors influenced the decline of hop production in the Northeast, including Prohibition, plant diseases, and higher yields at cheaper costs coming out of the Pacific Northwest, mainly Washington and Oregon, where most hops in the United States are grown today.

However, there’s a renewed interest and demand for local hops that is breathing new life into an otherwise “historical” crop.

“There are many hop growers in Vermont but only about 12 to 15 that grow quantities to distribute to brewers,” says UVM Associate Professor Heather Darby, an agronomic and soils specialist for UVM Extension, which grows hops at an experimental farm in Alburgh. “Most are growing for homebrew, but the number is growing fast for sure and there’s lots of interest.”

A Farm to Tap Project at Catamount Farm

The UVM Farmer Training Program, a six-month program that draws about 25 students per year, assigns each student to manage their own personal plot in the garden at UVM Catamount Farm. The program also requires each student to have an independent project that focuses on their own specific interest within sustainable farming. Heinrich focused her independent project on developing a business plan to establish a farm that supports a small brewery. She grew wheat and barley in her small garden plot, and also met with local brewers and hop farmers to understand more about the current local markets.

While studying in the program, Heinrich says she realized that research on hop farming in Vermont is fairly slim. But Heinrich did learn there are potentially high infrastructure and capital costs involved in growing and processing hops, and the plants do not produce significant yields until three to five years.

“So, there is a lot of risk and waiting involved,” Heinrich says. “Once more research comes out, I think people will be more willing to take the risk when they know what they are getting into.”

UVM Extension, which won a $130,000 federal grant earlier this year to improve hop production while reducing pesticide use, offers training for hop growing in the form of field days, conferences, videos, and other online materials.

Darby agrees that there are challenges to hop growing in Vermont. “It’s difficult from a disease perspective. A humid and wet climate leads to lots of downy mildew. It’s also difficult as this crop is new to the area — or reintroduced — and our knowledge on growing hops is minimal but growing. So, the learning curve is steep for farmers.”

Advice to Hop Farmers Starting Out

Kris Anderson of Addison Hop Farm was one of the hop growers Heinrich met with while researching her UVM Farming Training project. Anderson’s hop farm was established five years ago and is one of the oldest hop farms in the state. Hops from Addison Hop Farm are used by Bobcat Café & Brewery in Bristol, Peak Organic in Maine, Seven Barrel Brewery in New Hampshire, and Citizen Cider in Burlington.

Anderson says that no hopyards east of the Mississippi are producing a volume similar to the Pacific Northwest, adding that 70 families grow 98 percent of all hops in the United States. Also, since all eastern hop farms are less than 10 acres, farmers don’t how much they need to grow to be profitable and self-sufficient.

Even so, Anderson sees a future in hop farming in Vermont.

“There is enough appetite for a lot more local hops, from my experience,” Anderson says.

His advice for hop farm start-ups? “Get to know some brewers before you start growing, because if you are already in communication, it makes selling easier,” Anderson says. “Also, do not be in a hurry. Plant a few plants of your planned varieties and let them grow a year or two. If (the hops) don’t grow well, then don’t grow that type. This is a product sold by weight.”

As Anderson suggests, Heinrich plans to take her time.

She and Whaley will incorporate home brewing into their everyday life and develop recipes. They both want to enhance their skills and gain experience before opening a “farm-to-tap” business. While Heinrich enjoys brewing, farming remains her passion.

“Farming reminds me that sometimes we only get out of life what we are willing to put in. There are so many lessons to be learned in farming, whether it is in the awe of an abundant harvest and sharing it with those around you, or feeling what being tired truly is after a long day’s work,” she says. “I can’t imagine ever wanting to do anything else.”