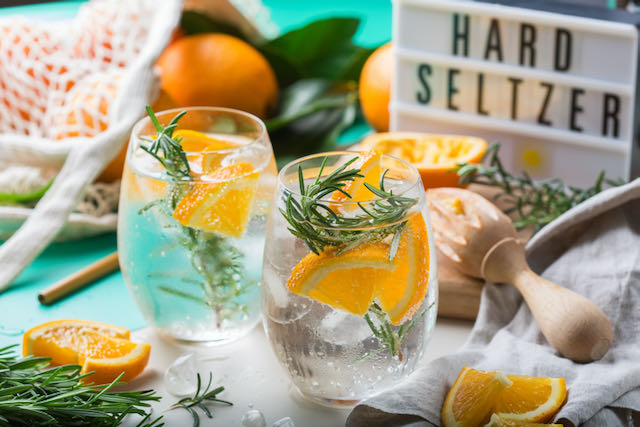 If you haven’t yet seen or tried a hard seltzer, you must be living under a rock or are stationed at the North Pole. The hard seltzer segment has tripled in dollar volume in the last three years. Here are numbers reported by The Bump Williams Consulting Company showing the market share of Total Beer comparison of Craft Beers vs. Hard Seltzers—for Memorial Day 4 weeks of sales, share of both hit 11.7% or a tie:

The hard seltzer segment is led by two juggernaut brands, White Claw and Truly, which had dollar shares of 50.7% and 23.8% respectively, at the end of 2020. Both brands grew over +120% last year, but also lost share of the hard seltzer category because the other brands in the segment grew faster. Anheuser-Busch total seltzers (led by Bud Light Seltzer) is a contender at 12.8% dollar share, with Constellation (led by Corona Seltzer) bringing in 4.5% share of Total Dollar sales. The Top 7 Hard Seltzer Vendors account for 97.2% of Total Dollar Sales. The chart below shows the Rank of these Top 7 Hard Seltzer Vendors at the end of 2020:

Why have hard seltzers done so well in such a short timeframe? It starts with the demographic of the core drinker. To understand who they are, we must first better understand the millennial drinker (born between 1982-1999). For starters, millennial drinkers are more likely to select flavored malt alcoholic beverages, such like hard lemonade and prepared cocktails, than other demographics. On top of that, they’re also consuming much more flavored sparkling water than other Americans.

This demographic is also more likely to be health and body conscious. Specifically, they place a greater emphasis on counting calories, exercise, and physical activity, than other demographics. White Claw, for example, contains only 100 calories, possesses 2g of carbs, is gluten free and is largely carbonated water, alcohol and natural flavors.

But most importantly, they really like to try new drinks. Per a poll of more than 2,800 millennials during the past year, 60% of this demographic said they enjoyed trying something new.

% who agree with the statement: “I like to try new drinks.”

Despite popularity among millennials, all of the hard seltzer brands still have a lot of work to do to capture the attention of baby boomers: only 25% of boomers who drink are aware of White Claw and only about 1% of them have purchased it in the last 30 days. But these are early days in the boozy seltzer wars, and regardless of whether this is a passing fad (think wine coolers or Zima) or a full-on industry shift (think light beer), there’s clearly still room for growth among other demographics — not to mention, more new players. Even Coca-Cola has jumped into the fray with an alcoholic version of its Topo Chico mineral water brand to the US this year and so has Pepsi with their Rockstar brand. Indeed, it seems more sales are about to bubble up.

According to John Shea, the new CMO at Mark Anthony Group, the other reasons for such a fast surge in sales are as follows:

There are also several new innovations happening within the Hard Seltzer category. Here are just a few of the exciting launches coming your way in Hard Seltzer:

Watch for new and interesting developments in the hard seltzer segment as the brand offerings continue to expand, new entrants, even from outside the alcohol industry join this space race, and new infused segments evolve like frozen icicles, snack foods and candy.

Views and opinions expressed herein are those of the author who has spent more than 40+ years in the beer, wine and spirits industry and are provided for informational purposes only.  The information set forth reflects the author’s opinion of current trends in the industry and should be researched further to make your own business conclusions.