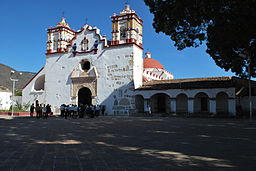 Teotitlan del Valle is a small weaving village outside of Oaxaca City, known for its unique cuisine. The dishes require fresh ingredients that have been used throughout Oaxaca since prehispanic times. In addition to the unique ingredients, the utensils and cookware that are used by the women of Teotitlan are essential to the cuisine. However, much of these utensils are not available in places like the U.S. and the U.K., so we have provided alternative cookware options in the following recipes. For example, the quesadillas and tortillas would ideally be prepared on a traditional Mexican comal. Comals, made of clay, can be replaced with more modern griddles. Also, in order to grind the chiles, tomatoes, and garlic, the women of Teotitlan would use what is called a metate in order to create the perfect consistency. The metate is a large and pourous volcanic-stone with a concave surface which is used to grind many ingredients. In place of a metate, a spice grinder, mortar and pestle or food processor can be used in order to obtain a similar consistency.

In addition, in order to make proper masa dough and Oaxacan chocolate, the women would bring the ingredients to their local molino where the corn kernels or cacao beans would be ground to the proper consistency. Because this is most likely not possible in areas where these recipes will be used, we have indicated the use of electric grinders or pre-made ingredients.

Either way, these dishes will prove delicious and authentically Mexican. Follow the recipes and you will create savory, sweet, and unique comidas. ¡Provecho!

The Women Behind the Recipes

A group of Zapotec women who belong to a women’s weaving cooperative in Teotitlan were essential in helping us collect the following recipes. Here, we will highlight two of the kind woman who provided guidance, hospitality, and delicious meals.

Pastora is one of the main organizers for the women’s weaving cooperative, Vida Nueva, which exists in her home. Pastora is also a traditional healer, trained by her mother, Sophia who is one of the many gifted healers of their village. Pastora is not only an artist and a healer, but also a talented cook. She learned these skills and recpies from her mother, who learned from ancient Zapotec traditions, passed down through generations. While Sophia, Pastora’s mother, does most of the cooking for her and her four sisters, Pastora also makes many of the meals for the family. She creates delicious and delicate Zapotec meals almost every day for almuerzo, traditionally served in the late morning, and comida, traditionally served in the late afternoon. All of her knowledge of food and recipes are held in her mind, she never uses written instructions. Her kindness, calmness and caring for others is both apparent in her actions towards others, as well as her unforgettable food.

Petrona, another amazing chef and weaver of the village, grew up in a family in Teotitlan del Valle with a long history of cooking and weaving. She left school at a young age to spend more time at home in the kitchen learning to cook and weave from her parents. In 1997, she moved to Tijuana to work in an artisan craft store. In Tijuana she met her husband Juan. Together they had fourteen-year-old son David, and eventually moved back to Teotitlan because of its tranquility. She enjoys cooking many dishes, some of her favorites being enchiladas and tamales. She has even begun to teach her husband and son how to cook in order to pass down her traditions.

Ready to get started?