Eric Holt-Gimenez Presents ‘How to Feed the World Without Destroying It?’ on March 18 at UVM

Eric Holt-Gimenez, Ph.D., is the executive director of Food First/Institute for Food and Development Policy (July 2006-present). Called one of the country’s “most established food think tanks” by the New York Times, Food First’s mission is to end the injustices that cause hunger, poverty and environmental degradation throughout the world. 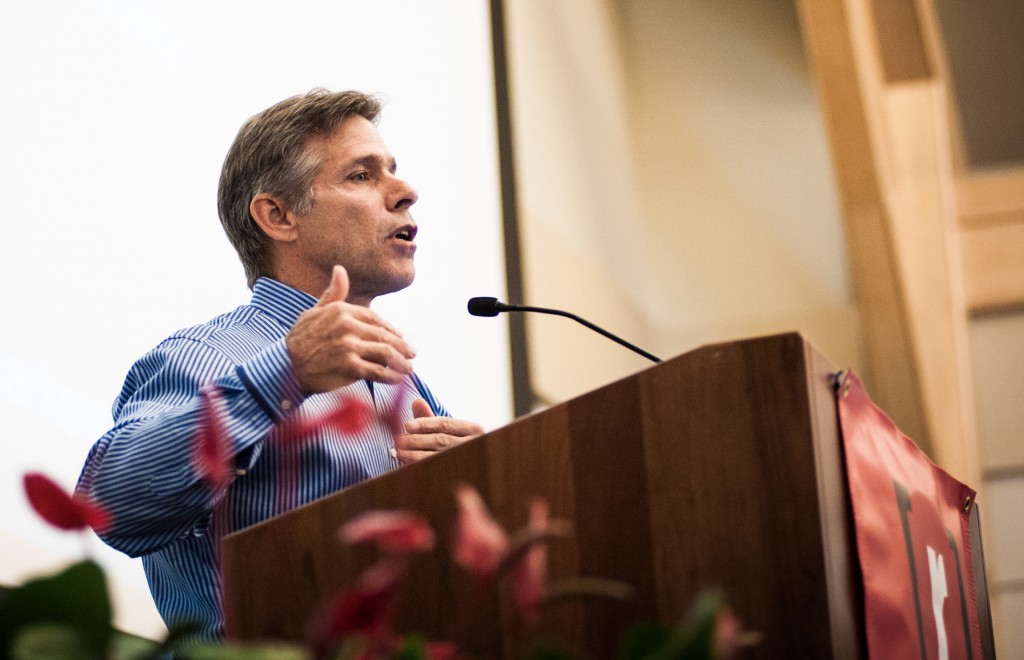 Food First believes that a world free of hunger is possible if farmers and communities take back control of the food systems presently dominated by transnational agri-foods industries.

At Food First, Eric’s research and writing has concentrated on the global food crisis, agroecology, the U.S. Farm Bill, the expansion of agro-fuels, land issues, racism in the food system, and social movements for agro-ecology, food justice, farm justice, and food sovereignty.

Eric is the author and editor of the Food First books, Can We Feed the World without Destroying It: A Foodie’s Guide to Capitalism: Understanding the Political Economy of What We Eat; Land Justice: Re-Imagining Land, Food, and the Commons; Food Movements Unite! Strategies to transform our food systems, Food Rebellions: Crisis and the Hunger for Justice, as well as many academic and magazine articles and blogs. In his first book, Campesino a Campesino Voices from Latin America’s Farmer to Farmer Movement for Sustainable Agriculture (2006), he chronicled his involvement with this movement in Mexico and Central America for over two and a half decades.

Eric will be visiting UVM on Monday, March 18 and giving a talk in the Livak Ballroom of the Davis Center at 3:30 pm titled, “How to Feed the World Without Destroying It?”

We talked to Eric about overproduction, capitalism, and transforming the food system.

Often we hear that we must produce more food to feed a growing world population, but in your book, Can We Feed the World Without Destroying It?, you argue that overproduction leads to hunger, chronic illness, and food waste. Can you explain why we continue to hear that we need to produce more food in the coming years?

Capitalism overproduces. It has to constantly expand or it dies. With our food system, this has several perverse consequences. First, the price of commodities drops because the market gets saturated.

Second, firms expand, either by finding new markets or driving competitors out of existing markets, which in turn leads to monopolization. New products are developed using cheap commodities—for example, ethanol, or grain-fed livestock raised in huge, polluting confined animal feedlot operations—to sop up all the surplus.

Grain and feed monopolies, and the food processors and retail giants, all like to get their primary materials cheap, so they like it when our farm sector overproduces. Then they have to sell the overabundance of food products, so they need to open new global markets. Our government helps do this by buying up some of the surplus, then giving it to poor (largely rural) countries as food aid. This “aid” is then sold at prices below the costs of production to the urban populace. On one hand, it quells any unrest in the cities and gets people used to imported food products. On the other hand, it drives local farmers out of business and makes these countries dependent on food imports.

As local farmers go broke, they go hungry, so overproduction—not scarcity—is driving hunger. Their farms get bought up by bigger farmers who can take out big loans and buy the new production technologies from oligopolies like Bayer and Syngenta, who constantly need to expand sales to out-compete each other and satisfy their shareholders. Taxpayers subsidize overproduction through government subsidies to grain farmers so they don’t go broke selling their grain on the cheap, and again by subsidizing government food aid programs.

So, even though we already produce one-and-a-half times more than enough food to feed everyone on the planet—and still can’t end hunger—we are invited to believe that we need to double food production by 2050 to feed the expected global population of 10 billion people. We already produce enough to feed 10 billion but one in seven people are going hungry and nearly a third of the world is malnourished. How is producing more going to solve this? We’ve been hearing the same mantra for half a century, even though we have been overproducing food the entire time.

Calls to double food production to end hunger are an old capitalist marketing campaign that constantly renews itself to ensure the public’s consent to being taxed to support the global agri-food monopolies. Plenty of institutions like the FAO know there is more than enough food to go around. They know that hunger is caused by poverty and injustice, not scarcity, and they know that the capitalist food system is driving poor farmers—the ones who actually produce over half the world’s food—to bankruptcy and hunger.

What “Feeding the World” is really about is the monopoly capture of the land and the markets for food still controlled by the world’s poor farmers. But the mainstream food and agriculture institutions repeat the scarcity mantra all the same because they have no alternative (and are financially dependent on) a capitalist food system.

Drawing from your previous book, A Foodie’s Guide to Capitalism: Understanding the Political Economy of What We Eat, what do you want the food movement to understand about capitalism?

Actually, I wrote the book because I wanted the food movement to understand we have a capitalist food system and that to change it, we need to understand how capitalism works.

It is so heartening to see the spectacular growth of CSAs, farmers’ markets, organic farming, urban agriculture, farm-to-school programs, community food coops over the last ten years. People are grappling with the immediate problems of hunger, food insecurity, food apartheid, and a toxic food system.

But one by one, these hopeful alternatives are steadily quashed or co-opted by the big corporate players in the food system. The food movement has been very good at developing alternatives, but it hasn’t been good at addressing the systemic barriers to good, clean, fair food for all. Some even seem to think that we can transform our food system in isolation of the larger, political-economic system in which it is embedded. That system is capitalism and it has co-evolved with our food system, so clearly we can’t change one without changing the other.

The good news is that the food system has always been a pivotal pillar in capitalism, so if we can push systemic changes within the food system, it will influence the rest of the system. That’s why things that seem utopic, like insisting on the human right to food and food sovereignty, are so important. To the extent we can ensure these rights, we dismantle capitalism.

What are some examples of leaders from various sectors of the food movement coming together to transform the food system?

Back at the turn of the last century, one in five people in our country lived and worked on a farm. Farmer’s unions were so strong they were able to demand and get parity programs in the New Deal. They had their own political parties and ran presidential candidates. They had a champion named Henry Wallace in the White House as vice president and then as Secretary of Agriculture. They got things done because they had hand their hands on the means of production and were a political force to be reckoned with. They were powerful enough to create political will on the part of the Roosevelt Administration to push forward the New Deal.

That’s not true anymore. Now they are less than 2 percent of the population. We have more people in prison than we have on the land. The only way to build that kind of power again is through alliances and political awareness. Luckily, we have a very broad-based food movement with a lot of very politically aware folks doing community food projects in the cities and in communities of color, with farm and factory workers in the fields and processing plants, and with restaurant workers as well. And though the farmers’ unions are a shadow of what they were, they have not disappeared, either.

There is a growing interest among young people to work the land sustainably. Colleges and universities are offering more and more courses in agroecology and food systems, and public health programs are focusing more and more on food. So, we have all the ingredients to build a political movement that does a lot more than post on Facebook and share sign-on letters.

But we need to do something we’ve never done before: we need to converge in all of our diversity and we need to re-politicize those movements that have taken their eyes off capitalism.

We need to follow the leadership of the people who are most negatively affected by the current food system—and without whom the food system would fall tomorrow: people of color, indigenous peoples, small family farmers, and immigrant farm and food workers. We see this type of leadership and convergence growing in places like the Climate Justice Alliance, Cooperation Jackson, Food Chain Workers Alliance, and La Vía Campesina. We also see it locally in many of the food policy councils that have sprung up around the country.

What message do you have for the students and members of this community attending your talk who want to make a difference and are trying to navigate how to do that?

First, whatever you are doing—studying, gardening, in a CSA, whatever—thank you, and keep doing it. Now, you need to do something else: change everything! Let’s catch the momentum of the Green New Deal to build a powerful, broad-based, working class and people of color-led movement for transformation. Let’s create the political will not just for reforms, but for transformative, structural reforms that put us solidly on the road to food sovereignty and to cooling the planet.

For more information, please check out Eric’s presentation at the 2014 UVM Food Summit and a review of one of his recent books, A Foodie’s Guide to Capitalism: Understanding the Political Economy of What We Eat by Associate Professor of Anthropology and Interim Director of the Food Systems Graduate Program, Teresa Mares.

Eric will present “How to Feed the World Without Destroying It?” on March 18 at 3:30 p.m. in the Livak Ballroom at the UVM Davis Center.