Senior environmental studies major Nell Carpenter is holding court, in a friendly, peer-to-peer kind of way, with eight fellow students in her PSS 212, Advanced Agroecology class at Bread and Butter Farm in Shelburne, where the group will be taking soil samples as part of a weekly on-farm lab that’s a feature of the course. 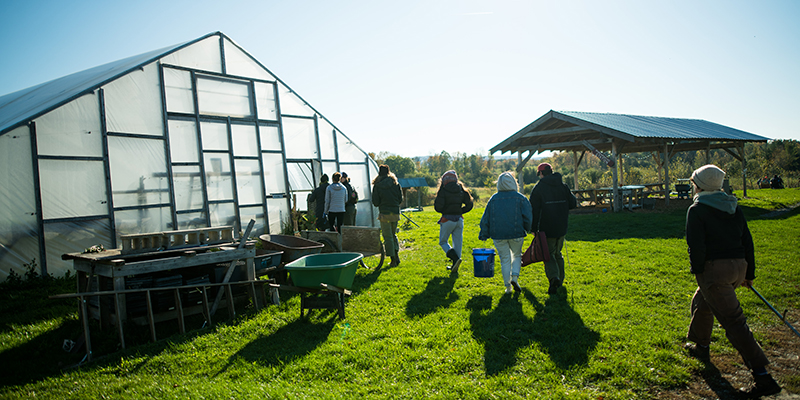 Students in an advanced agroecology class head for a greenhouse at Bread and Butter Farm to do soil testing. (Photo: Andy Duback)

Clipboard in hand, Carpenter lays out the plan for the day. “We’ll be bagging three cups for every two-acre sample site, as well as taking penetrometer readings everywhere that you do a core, a six-inch core, as well as moisture meter readings,” she says.

The students hang on her words.

The EPI program encourages faculty members in all disciplines to apply for grants from the Office of the Provost that allow them to rethink and rebuild their courses around a series of “high impact practices,” teaching approaches – like students partnering with faculty on research projects – that studies have shown inspire and motivate them to learn more deeply.

Since the program was created in 2015, 15 EPI grants have been awarded in academic disciplines ranging from classics and Asian studies to physics and wildlife biology, as well as in Student Affairs and Residential Life. Based on the impact evaluations they require, the grants are having just the positive effect on engaged teaching and learning and the student experience they were designed to inspire.

EPI has had a transformative effect on PSS 212 and its work with five Vermont farms, including Bread and Butter, UVM’s Catamount Farm, Diggers’ Mirth Farm, The Farm Between and Jericho Settlers Farm.

Plant and Soil Science professor Ernesto Mendez has taught the seniors-only advanced course for 10 years. It always gave students an opportunity to learn the foundational principles of agroecology – that agricultural land should be viewed as an ecosystem and the people who work the land as part of a social fabric, both of which deserve respect and care – not only in a classroom setting but also on local farms.

But there was always something missing.

A key tool Mendez wanted his students to acquire in the class, ideally through first-hand, on-farm experience, was a foundational element in his own work called participatory action research, or PAR, where researchers collaborate on an equal footing with the people they’re studying to make sure the work has value for both parties.

“I had asked them, there’s a possibility we could be doing something of value for you,” says Mendez. “But they had always been like, you know, the labor is great in terms of the benefit we get, and we like the students,” but the research itself wasn’t a priority.

And while the class did feature student research, in the form of soil testing on the farms, the farmers’ lack of engagement robbed it of its power.

“When you create an artificial research project, so the students are just learning how to collect data, it’s not that meaningful,” Mendez says.

After years of watching students do soil tests, the farmers’ position evolved. Two years ago, they decided research would be an effective tool in addressing some of the challenges they were facing.

Specifically, they asked if the students could help them gauge the health of their soil over time, establishing a baseline in year one, then measuring it annually each year with a new crop of students.

That represented a great opportunity for Mendez and his students – but also an intimidating responsibility.

Could farmers trust the accuracy of the data students were collecting, which could drive business decisions affecting their livelihoods?

The salience of that question hit home after a pilot version of the course in 2017 yielded data that Mendez knew was not up to snuff.

Soil health was a topic of interest for all five farms the students visit weekly in teams of six to eight, especially so for Bread and Butter Farm, which produces organic vegetables and grass-fed beef and pork the farmers sell locally.

Owner Corie Pierce and land-manager Brandon Bless practice a form of land management called mob grazing, which mimics the behavior of the wild ruminant herds of buffalo, elk and deer that once roamed the Great Plains.

“The animals played this important role of walking through, fertilizing, eating just a little bit, trampling the rest of it as mulch and moving on,” which created some of the most fertile land on earth, with “topsoil several feet deep,” Pierce says.

For the past nine years, the farmers – with Bless taking the lead the past three – have practiced just this kind of intensive rotational grazing, moving their cows, and the enclosing fences with them, up to four times each day.

While the farmers know intuitively that the practice has enriched and restored their pastureland – an end in itself in agroecology, but also a means of a creating nutrient-dense diet for their herd – they have a clean slate with a new piece of land they’ll be managing that’s much in need of revival after years of dairying, haying and heavy machinery depleted and compacted the soil.

On the new land, the farmers are keen on using students to precisely measure the impact of mob grazing “on the depth of the soil and the species that are growing there,” Pierce says. She and Bless could then evaluate “how that translates to our animals’ health and productivity.”

The EPI program, and some old-fashioned creative thinking, were instrumental in guaranteeing the class delivered to Pierce and Bless and the other farmers accurate, reliable data – at the same time ramping up student engagement.

With the help of EPI funds, Mendez and several faculty colleagues, including Martha Caswell and Vic Izzo in Plant and Soil Science, Karen Nordstrom in the Environmental Program and Joshua Faulkner in UVM Extension, threw themselves into the PAR process, meeting regularly with the farmers to learn exactly what each wanted the student-led research program to accomplish. It is also paying for the analysis of soil samples that aren’t done at UVM and for a rigorous evaluation of the program’s impact on student learning – one of the requirements of an EPI grant.

But the biggest change came from a flash of insight – that the five talented students, including Carpenter, in the new Undergraduate Research Fellows program, who worked with Mendez research group, the Agroecology and Livelihoods Collaborative, could be redeployed.

“We started thinking about linking them to the program,” he says. “We would put one in charge of each farm and they would help the students collect the data. They’d get trained, connect with the farmers, set everything up and would be like team captains.”

That vision prompted Mendez and his team to apply for the EPI grant.

It’s hard to imagine a better example than PSS 212 of the impact the EPI program can have on student engagement.

After Carpenter finished her information session with fellow students at the start of their lab at Bread and Butter Farm, the group descended on a greenhouse and engaged in a whirlwind of simultaneous soil testing activity: measuring the moisture content of the soil, gauging its pressure at depths of six and 12 inches, bagging soil samples just so at key spots for biological analysis later. Some students did the physical work, others acted as scribes taking down the measurements, still others checked the notetakers’ work for accuracy.

The due diligence – and academic engagement that came with it – is just what Mendez and his colleagues predicted would happen after the research took on real meaning.

For senior environmental studies major Harper Simpson, the knowledge that she’s making a real contribution is a powerful motivator.

“It gets our team on our toes, since we’re the baseline year, and that’s pretty awesome,” she says. “It also makes me want to do well for Ernesto and his research results, as well as the farmers.”

But perhaps the greatest impact of a program designed to promote engaged student learning has been on the Undergraduate Research Fellows.

In weekly meetings of the five fellows, supported by off-the-cuff sessions with Caswell and Izzo, teaching assistant Katie Horner, a doctoral student in the collaborative, and Nordstrom, the fellows are learning soft skills like leadership, reflection and teamwork.

“There is this really cool dynamic between all of us, where we really are lifting each other up together,” Carpenter says. “We learn both about how to navigate these things as humans as well as learning about the material.”

Everyone knows about learning by doing, Carpenter adds, but the fellows program takes things a step further.

“It’s learning by teaching,” she says. “It’s incredible. It’s not something everyone might be interested in, but I think for the five of us and for myself personally it’s a really incredible way to be steeped in this, as opposed to just having stacks of books on my conference table.”