In the spring of 2017, early in his tenure as director of UVM Extension, Chuck Ross got a long voicemail message from a farmer and culinary tourism advocate in Pontiac, Quebec named David Gillespie. Did Vermont have any interest, Gillespie wanted to know, in being part of an international culinary trail he was helping create that connected Quebec, Ontario and the Adirondack region of New York State? 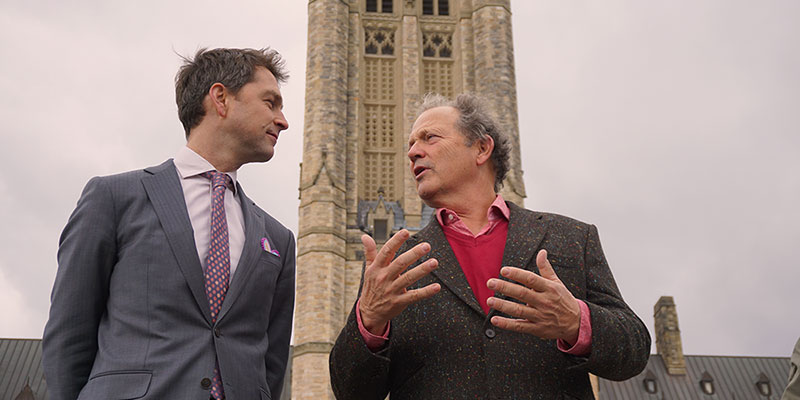 UVM Extension director Chuck Ross (right) speaks with William Amos, a member of the House of Commons from Pontiac, Quebec, at Parliament Hill in Ottawa. Ross and members of delegations from New York, Vermont, Quebec and Ontario stopped at the Canadian seat of government to talk about a developing international culinary trail connecting the four regions.  (Photo: Sarah Tichunok)

“I didn’t know David from Adam,” Ross said, “but I returned the call.”

An hour-and-a-half later, Ross could not have been more sold on the tourism opportunity represented by a culinary route dotted with high quality food producers, vineyards, farms, farm-to-table restaurants and farmers’ markets that wound its way through famously scenic areas in two states, including the Champlain Valley region of Vermont, and two provinces.

After a follow-up meeting with Gillespie and other partners in Quebec, Ross and Lisa Chase, Extension’s agritourism expert, brought the tour idea to other key stakeholders in Vermont – including the Agency of Agriculture, Food and Markets, the Department of Tourism and Marketing and the Vermont Fresh Network – who were equally intrigued and soon signed on as co-sponsors.

Last week, after a year of meetings and calls to work out logistics, the trail took a major step forward with a bus tour of the Canadian leg of the trail that was part a get-to-know-you exercise and part pilot. About 40 representatives – including agriculture and tourism officials from Vermont and New York State and food producers in both states – participated.

The two-day tour featured stops at seven vineyard/wineries, fromageries, farms, inns and farmers’ markets that spanned south central Quebec to Ottawa to eastern Ontario. The group also stopped at Parliament Hill in Ottawa to talk up the trail with legislators.

The tour exceeded even his high expectation, Ross said, underscoring “the quality of the products and the passion of the producers and operators in this region.”

Chase was similarly impressed. “The hospitality that the Canadians showed us was pretty incredible at every stop,” she said.

Though each of the four areas on the culinary tour have individual strengths as tourism destinations, combining them into one multi-faceted, international trail significantly magnifies their appeal, Ross says.

“It amplifies what’s here, gives us a bigger presence, and enables us to put this area on the map as a global destination to see beautiful landscapes, engage with value-added farming operations, and enjoy the incredible culinary products that we generate in this region,” he said.

Gillespie needs no convincing, “Because of its length” – it clocks in at over 900 miles, perhaps the longest culinary trail in the world – and the variety and quality of the stops along the ways, “it can be a worldwide attraction,” he said.

Though eastern New York, western Vermont, southern Quebec and eastern Ontario are normally thought of as distinct, they constitute a true region, according to Ross.

“The geography of Lake Champlain and the St. Lawrence Seaway and the Ottawa River are part of the same watershed, the people share common history and common ancestry, whether Francophone or English speaking,” Ross said. “And they have a similar climate and similar products.”

From Cornwall to Swanton

Much remains to be done before the international trail can formally open, said Chase, who has played a major role in pushing the logistics forward.

“We need a name for the international trail and cohesive branding that would include a website with the trails in all four regions so visitors can create customized tours,” she said. “We also need to deal with biosecurity issues, both for tourists and farms.” A committee with representatives from all four regions is hard at work addressing these challenges, Chase said.

An event this week will provide an opportunity to both market the tour internationally and pick up information that could help it succeed. Chase and Gillespie are making a joint presentation on the trail at the 1st World Congress on Agritourism in Bolzano, Italy, November 7-9.

The project has been a gratifying one for Ross.

“The collaborative spirit was really profound, and any issues that existed between our countries were not present,” he said. “I certainly try to make it clear in all my remarks that we recognize Canada as the United States’ best friend and great collaborative partner to the north.”

Ross expects the international trail to formally launch in 2019.

This story was first published by UVM Communications on UVM Today.