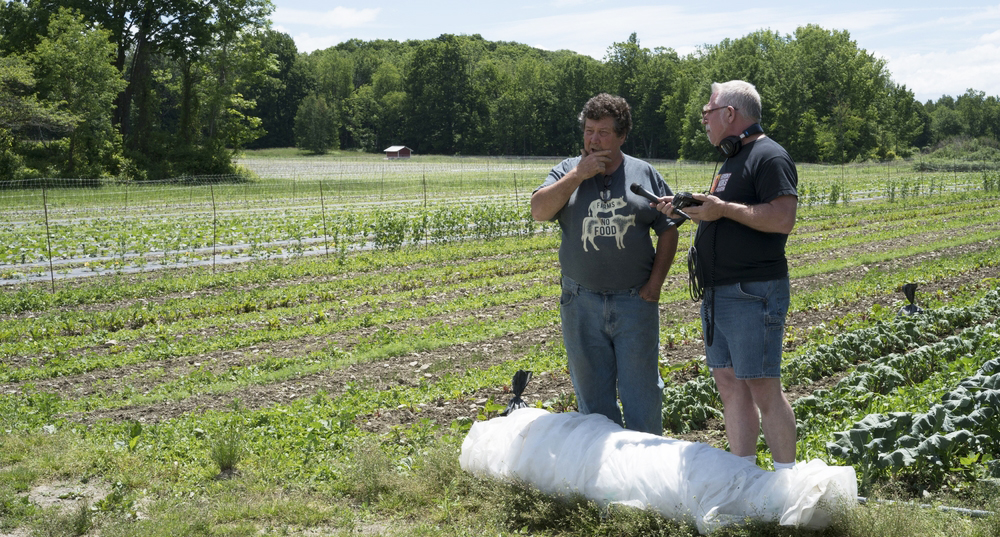 The result is Growing Food, Growing Farmers, an exhibit that takes an intimate look at the expanding community of young farmers in Rutland County and the surrounding area. The exhibit showcases farmers, often with their families, through large-format photographic portraits by Macaulay Lerman.

Eleven portraits and audio interviews are featured in the exhibit, which runs through December and includes an opening reception and gallery talk on Sept. 7 from 5-7 p.m. at the Vermont Folklife Center in Middlebury.

The interviews tell stories of diverse agricultural systems and communities thriving in many parts of Vermont, including Rutland County. Sharrow described his early meetings with farmers in the Rutland area as revealing “the spokes on a wheel,” with the hub located at Boardman Hill Farm, where Greg and Gay Cox have lived and farmed for more than three decades.

Over the years, Greg and Gay Cox watched land costs skyrocket and become a barrier to new farmers. Greg began to conceive of a Rutland-based, community-oriented initiative that would support incubator projects where young farmers could try out new ideas, learn through mistakes, and develop the skills and experience that would contribute to the community’s growth. Gay and Greg Cox chose promising young people with a work ethic and offered pro bono use of their land, markets, infrastructure, and equipment. They mentored hundreds of interns and a series of school program helpers.

“This exhibit is a reminder of what buying locally grown food really means,” says Ned Castle, program director for the Vermont Folklife Center’s Vision and Voice Gallery.“The thesis of the exhibit comes from this idea that farmers are spokes on wheel radiating out of Boardman Hill Farm.”

The metaphor of the “wheel,” a central theme of the exhibit, is conveyed in the form of biographies and audio interview excerpts that complement the portraits of more than a dozen current and former farmers, many of whom trace some aspect of their agricultural trajectory to the Cox’s mentorship and generosity.

Scott and Lindsey Courcelle, co-founders of Alchemy Gardens, are among the featured farmers that have a connection to the Greg and Gay Cox. In an audio clip from the exhibit, Scott shares some impressions from having worked closely with Greg Cox: “One of the really stunning things about Greg is here he is, giving us this opportunity to go out and beat up his equipment and take up space in his cooler…and then our stand is directly next to his in the farmer’s market.” Scott provides further insight into Cox’s philosophy by reciting one of his analogies: “A lot of people use the analogy of, ‘Well, my piece of the pie is going to get smaller if we let all these new farmers in.’ [Greg’s] whole thing is, like, ‘Then grow the pie. Make a bigger pie.’”

The Vermont Folklife Center is located at 88 Main Street in Middlebury.