Perhaps you missed this winter’s news that the price of hummus spiked in Great Britain. The cause, as the New York Timesreported on February 8: drought in India, resulting in a poor harvest of chickpeas. Far beyond making dips for pita bread, chickpeas are a legume of life-and-death importance—especially in India, Pakistan, and Ethiopia where one in five of the world’s people depend on them as their primary source of protein. 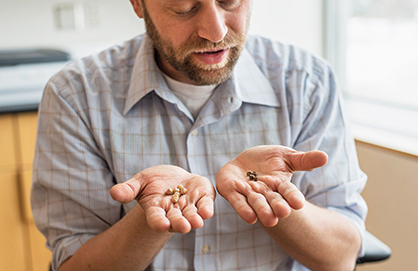 As global climate change continues, scientists expect more droughts, heat stress, and insect pests—creating need for new varieties of agricultural plants with diverse qualities that will let them cope and adapt to quickly changing conditions. Where could those novel traits come from?

“The wild relatives of crop plants are the most promising reserves of genetic diversity,” says Eric Bishop von Wettberg, a UVM plant biologist. He led a new research effort that took a deep look at the ecology and genetics of chickpea plants. The scientists discovered an extreme lack of genetic diversity and other threats to the future adaptability of domestic chickpeas. But they also collected wild relatives of chickpeas in southeastern Turkey that hold “great promise,” von Wettberg says, as a source of new genes for traits like drought-resistance, resistance to pod-boring beetles, and heat tolerance.

“Despite their potential value in meeting the challenges of modern agriculture, few systematic, range-wide collections of wild relatives exist for any crop species,” the team of scientists wrote in the journal Nature Communications, “and even the available wild genetic resources are widely under-utilized for crop improvement.”

As part of the new study, the scientists explored a large part of the geographic range of the two chickpea relatives, “from the bottom of the mountains to the top,” von Wettberg say—seeking to capture the diversity that differing micro-habitats, soil types, and elevations had created in various strains of the species. Then they did extensive crossbreeding of these wild plants with domestic ones. The resulting backcrossed plants and information about their genomes, “shows a way forward for improving chickpeas and many other crops too,” says von Wettberg, a professor in UVM’s Department of Plant and Soil Science and affiliate in UVM’s Gund Institute for Environment.

The genetic material the scientists extracted, and the seeds they collected, greatly expand the global stock of chickpea relatives available to science—and will now be part of international seed and germplasm banks that researchers and breeders can use indefinitely.  But, the scientists note, there is an urgent need to collect and conserve the wild relatives of many crops. “They are threatened by habitat fragmentation and loss of native landscapes,” von Wettberg says. “Where we were collecting plants in 2013 is now a war zone.”

This story was first published in Vermont Quarterly.