The agriculture, academic, and extension world lost a true friend with a sharp, grounded mind and a sense of humor only developed in farm fields, barns, and milk house driveways when Dr. Bob Parsons passed away Friday after a two-plus year battle with cancer.

Bob’s impact on Vermont agriculture looms large, as he has been key in studying dairy and other farm sector economics; in overseeing the UVM Risk Management Agency; in directing the Vermont Farm Succession Program; and in being a sought-out resource for detailing agricultural economics at all levels and relating them to stakeholders. Despite being quite sick (and sicker than he’d led on to those of us who work with him), recently he was commenting on Vermont Public Radio on the current state of milk prices and helping one of our undergrad students do his taxes. The man was dedicated right to the end. 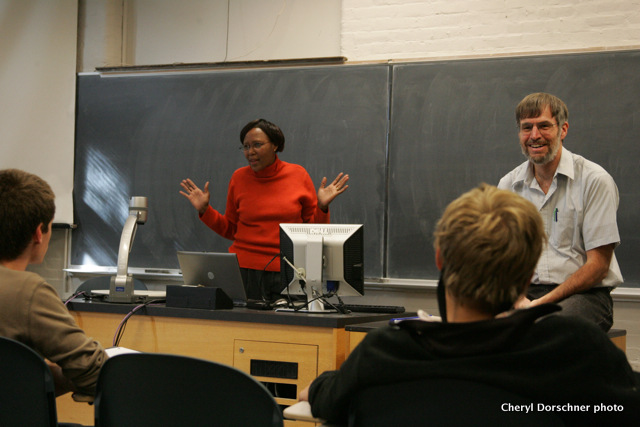 Bob Parsons (right) and his wife Grace Matiru in action.

I first met Bob when he was a co-investigator on the organic apple feasibility project, which would eventually yield me both of my graduate degrees and a substantial stash of early-career research papers and experience. He served on both of my graduate committees, and anyone who knew him will appreciate it when I say that in our sessions I learned more about his grandfather’s tractors than I did about the topic at hand. But Bob didn’t just rattle on (well, he did, kind of)- he brought the conversation back to the realities of farming in modern conditions, considering the macro-, micro-, and family-scale economic conditions that farmers face. He just got it, from a farmer’s point of view, which is rare in the halls of academia.

Last fall, Bob asked me to co-teach his Agricultural Policy and Ethics course for this current spring 2018 semester. I knew this was a big step for him, as he hadn’t taken a day off since his diagnosis, since treatment options are quite available what with UVM Medical Center being a short walk from our offices. We didn’t say it explicitly, but I knew what was going on.

“Bob, I can’t just sit in front of the class and rattle on about dairy policy off the top of my head like you can”, I told him. Bob said, and I clearly remember his words, “that doesn’t matter Terry, I know you can figure it out. These students need to hear from us, and I know that you can carry this on.”

I am teaching that class this semester and think of Bob every day, and the task he handed me to present to these students the conditions farmers face to make a go of it in the modern local, national, and international economies. I can only hope that those students, when talking amongst themselves, refer to me in any of the same air as they did Bob when they would highlight his point of view as a needed balancing point to the standard fare from a progressive northeastern Land Grant University.

Bob and I are among the few, maybe only (with nods to Deb Neher and David Conner) real-live farm kids who teach in the UVM College of Agriculture and Life Science. My views have been shaped by both my upbringing on a small dairy farm and my many years in academic life, and tempered by a connection I have maintained with the farming community through the Vermont apple industry in particular. I often find myself bridging divides between old Vermont / new Vermont; organic / conventional; and applied / theoretical. People like Bob and I are few and far between in this strange world, and this world needs us.

I remember the first time I traveled with Bob to an academic symposium in Leavenworth, Wash., a strange mountain town with a Bavarian fixation just upslope from Wenatchee, the self-proclaimed Apple Capital of the World. We were presenting some papers from that organic apple project, and I was lead or co-author on every one of them. This was among my first academic conferences, and certainly my first as author of multiple papers, including those from my Masters’ research. Frankly, I didn’t think that our economics paper was up-to-snuff, but I can still see Bob as he stepped up to the podium and started going through the slides. The graphs, despite having no statistical analyses, were quite clear: we were losing money in our simulations of organic orchard production, and Bob said to the crowd, “well, it doesn’t take a damned Ph.D. to tell that this isn’t working.” I still use that line when appropriate, as it so often is.

We did publish that research, and Bob was right. It’s important as an agricultural academic to stay grounded in the field while staying current in the latest research in your field. As I consider my career and its place in the greater field of Vermont agriculture, I look to no-bullshit mentors I’ve had, like Lorraine Berkett, Bertie Boyce, and Bob Parsons for continued inspiration.

Thanks Bob, for all you’ve offered to me and the greater agricultural community in the years I’ve known you. You’ll continue to be an inspiration to me, and I promise to carry on in your spirit as I not only work with farmers, but also as I teach the next generation of farmers and food systems practitioners from the viewpoint of someone who has shoveled more shit than most will see in a lifetime, and who respects the advances we have today that make that job more rare than when we were kids.

-Terry Bradshaw is research associate and tree fruit and viticulture specialist at UVM.