Too little rain, or too much, is often a driver of poverty and hunger, leading to poor nutrition and food insecurity among vulnerable populations. According to a new University of Vermont study, rainfall patterns also provide clues on how to most effectively alleviate food insecurity. 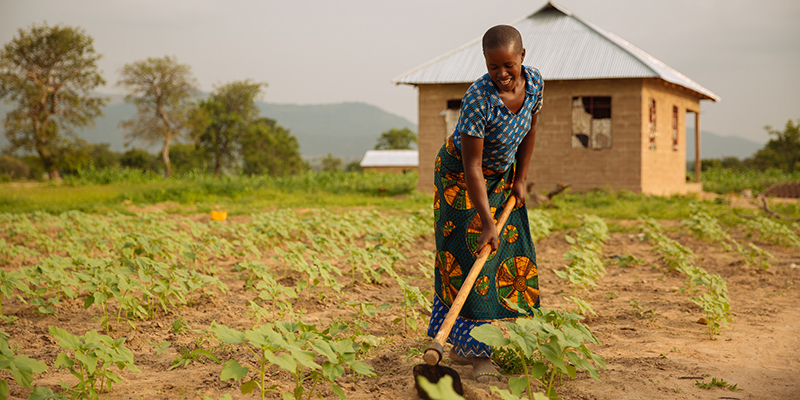 A woman uses a hoe to till the soil on a small farm in Tanzania. (Photo: Mitchell Maher/International Food Policy Institute)

The study, published November 24 in Scientific Reports, is the first to analyze on a large scale the relationship between food insecurity among smallholder farms in Africa and Asia, rainfall patterns and a range of interventions – from agricultural inputs to agricultural practices to financial supports – designed address the issue.

Smallholder farms are small farms with limited resources that depend on the family for labor and on the operation’s crops for food or income. There are an estimated 460 to 500 million smallholder farms in the world, who grow 80 percent of the food consumed in low income countries.

The study examined the experiences of nearly 2,000 smallholder farms in 12 countries in West Africa, East Africa and Asia.

“The big picture is that one strategy is unlikely to work everywhere,” said Meredith Niles, a faculty member in the University of Vermont’s Department of Nutrition and Food Sciences and lead author of the study. “Understanding the climate context is important in determining what interventions may be most effective,” she said.

The drier farms experienced more food insecurity, an average of 3.81 months in the study year; the average farms less, 3.67 months, and the wetter farms still less, 2.86 months – as would be expected. But all experienced significant food insecurity. “The study reaffirms what we know: that food insecurity is a widespread problem in these areas,” Niles said.

Cash or pesticides? It depends

Whether various interventions were correlated with better food security was statistically linked with the amount of rain the farms had received in the previous year, the study found.

For farms with drier than average conditions, financial supports – cash from other businesses, loans or cash gifts – were more frequently correlated with improved food security.

For wetter farms, agricultural inputs and practices – including the use of pesticides, fertilizer, veterinary medicines, and livestock – were most correlated with an increase in food security.

For farms with average rainfall, both strategies appeared to be effective.

“Water is a fundamentally limiting factor,” Niles said. “If you don’t have it, then agricultural inputs likely don’t matter. What you need, at least in the short term, is cash.”

The availability of fertilizer was the one constant that helped farms reduce food insecurity, regardless of the amount of rain they received, according to the study.

The study is both an endorsement of the micro-financing strategies that have been put in place to help farms in Africa and Asia and a cautionary tale that they might not universally be critical for smallholder farms experiencing food insecurity.

“We don’t see an effect that financial strategies in wetter than average households make a difference in the short-term,” Niles said. “But these financial strategies seem to be especially important when drought or reduced rainfall impacts crop production and income sources.”

The importance of strategic intervention

The issue of what works and what doesn’t is particularly significant because of climate change, said Niles. “The majority of smallholder farms rely on rain-fed agriculture, so they are vulnerable to climate change, which is slated to likely increase rainfall variability. Our work suggests that absent appropriate interventions, these future conditions may worsen food insecurity.”

To reach its conclusions, the study cross analyzed two data sets. A smallholder farmer survey by the Climate Change, Agriculture, and Food Security (CCAFS) Program was coupled with 30 years of rainfall data for each household location in the survey using GPS coordinates.

According to the Food and Agriculture Organization of the United Nations, food security exists when all people, at all times, have physical, social and economic access to sufficient, safe and nutritious food which meets their dietary needs and food preferences for an active and healthy life.

The study’s co-author is Molly E. Brown, a faculty member in the Department of Geographical Sciences at the University of Maryland.